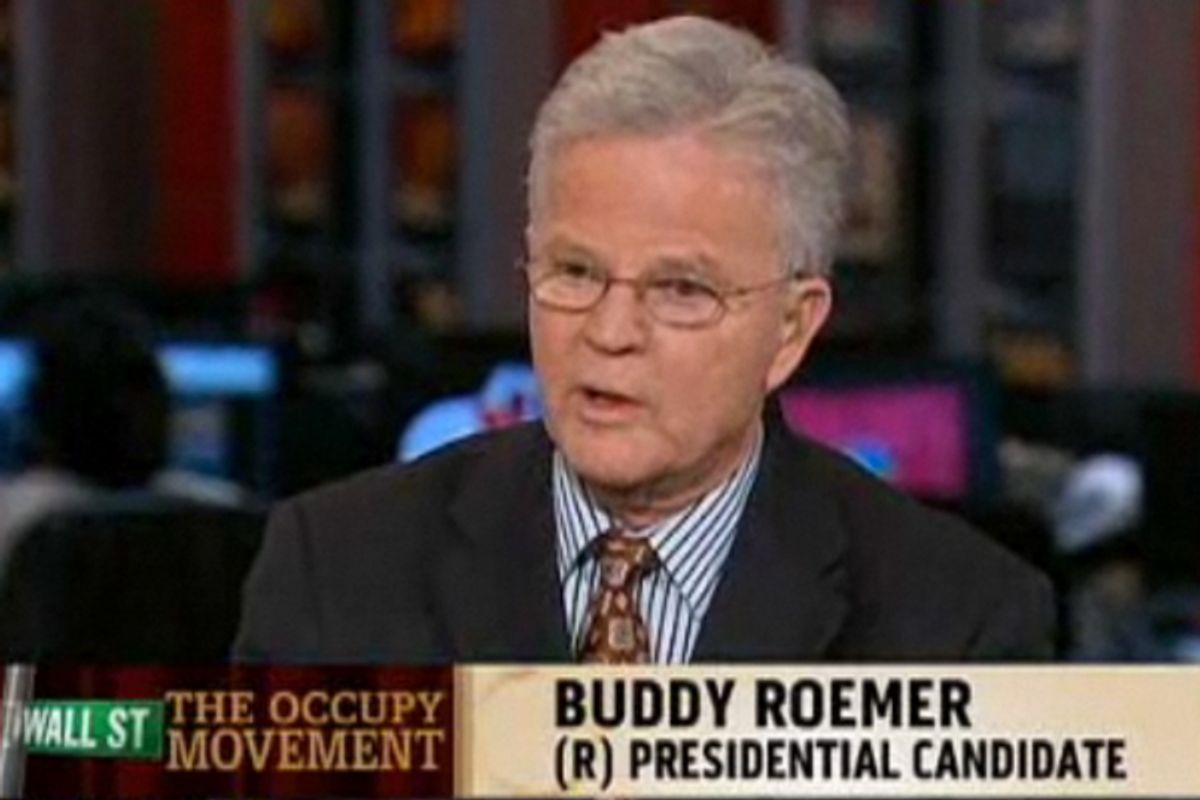 President Obama won't face a credible primary challenge, but we don't need to strain hard to imagine what one would have looked and sounded like. Just pay attention to Buddy Roemer.

The former Louisiana governor is seeking the Republican presidential nomination, but you wouldn't necessarily know it from his platform. While the rest of the field has been busy feeding the Tea Party-era GOP base's notion of the Obama White House as a "secular-socialist machine" (the term coined by current front-runner Newt Gingrich), Roemer has been building a much different case against the president -- one with potentially strong resonance among liberals frustrated with Obama.

The main theme of Roemer's campaign is that politics and government are now rigged in favor of major corporations and super-wealthy individuals, a monied elite that profits from the actions of politicians it controls through massive campaign contributions. This is what led Roemer to embrace the Occupy Wall Street movement, something that virtually every Republican-aligned opinion-shaper has sought to paint as a dangerous leftist uprising, arguing that even in post-bailout America the big banks are still calling the shots and jeopardizing average citizens.

“Too big to fail is still the law," he lamented on Tuesday's "Morning Joe." "Glass-Steagall is still defeated. No increase in capital ratios. And Fannie Mae and Freddie Mac still exist. It’s a disgrace.”

In other words, as his fellow GOP candidates cry "Socialism!" over the modest Wall Street reform package that Obama pushed through Congress last year, Roemer is making an argument more commonly heard on the left: It didn't go nearly far enough. And he connects this to another key tenet of liberal disgruntlement: the huge sums of money Obama has sought and received from the bad boys of the financial world.

"Guess who the president’s raising from," Roemer said Tuesday. "The very banks he’s supposed to regulate. He went to Wall Street, had a fundraiser, $35,800 a ticket. And you know who the host was? Goldman friggin’ Sachs."

This is exactly the sort of argument that Obama's liberal critics have been making, and that many of them would like Obama to be confronted with in a campaign setting. This isn't to suggest that Obama would be in danger of losing the Democratic nomination against a credible challenger. The depths of liberal despair over his presidency are often overstated. But there are liberals who really have given up on him, and even many of those who are still with him are frustrated and disheartened. A Democratic challenger who, like Roemer, embraced the spirit of OWS and railed against the sway the top 1 percent has held with the Obama White House, could have found a receptive audience on the left.

When I interviewed him earlier this fall, I asked Roemer -- who was a Democrat until switching parties in 1991, when he was defeated for reelection as governor -- if maybe he was running in the wrong party's primaries. After all, he'd been (and still has been) shut out of every single GOP debate, and his best source for media exposure has been MSNBC, not Fox News. He laughed and called me a troublemaker. And, to be fair, there are plenty of reasons why Roemer would be a poor fit for anti-Obama liberals. He still calls himself a proud Republican, he's not out there calling for single-payer healthcare, he opposes abortion rights, and he stresses that he does have policy differences with OWS: “They think we need more government. I think we need better government.”

Still, even if Roemer isn't quite right for the role, it seems obvious now that there was an incentive for an Obama challenger with at least a modicum of credibility to step forward. The political media loves a good campaign story and would have provided a challenger with a real platform to make the liberal case against Obama. The value of this exposure would have been considerable; just look at what Newt Gingrich has managed to achieve on the Republican side without ever running a single television ad or building a real campaign infrastructure.

Again, this is not an argument that Obama would have been in danger of losing the nomination. But if, say, a reasonably coherent House backbencher had put his name on the ballot in New Hampshire and was making the arguments Roemer is making, just imagine the fun the political press would be having with it. Liberals who are exasperated with Obama would be thrilled to have someone making their case, and the challenger would probably walk away from the process with a whole new career as a political celebrity.