The secrecy-loving mind of the U.S. journalist 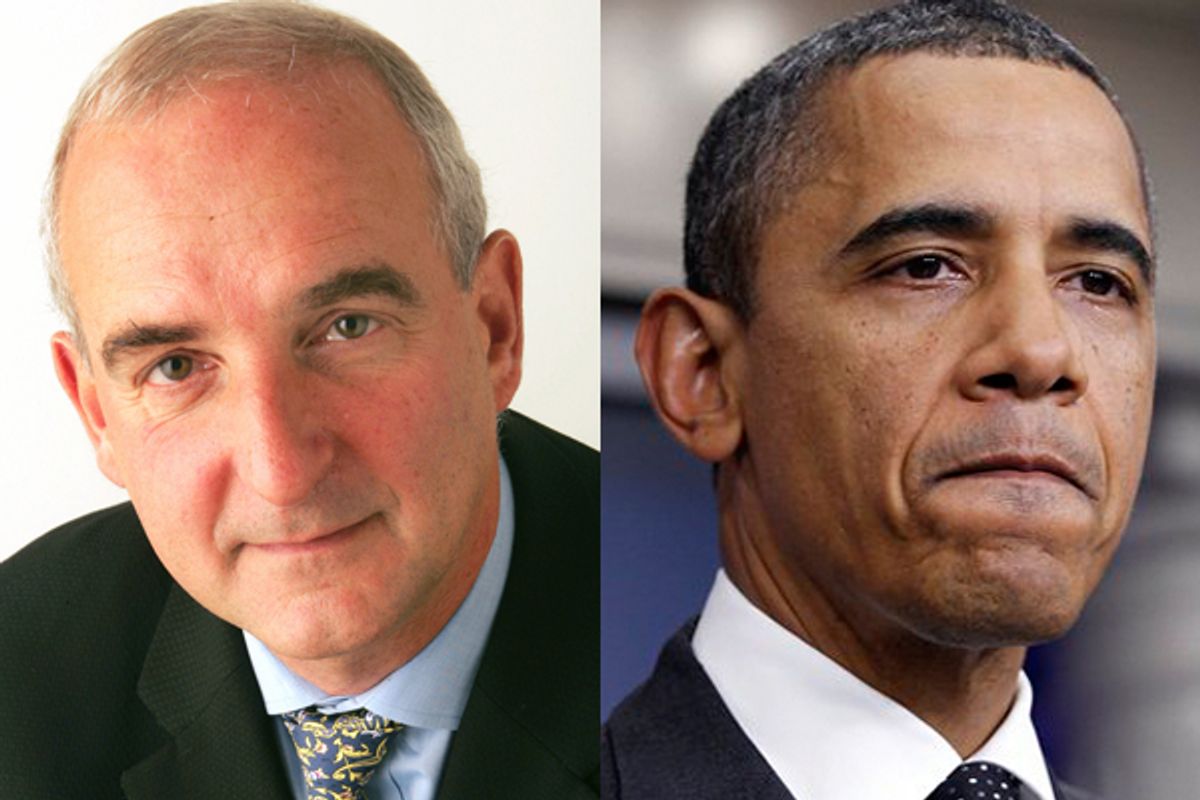 In July, 2007, The Washington Post's Richard Cohen wrote a column condemning the prosecution of Lewis "Scooter" Libby on the ground that political officials should not "be called to account for practicing the dark art of politics"; instead, he explained: "as with sex or real estate, it is often best to keep the lights off." At the time, I hailed Cohen's column as "a true tour de force in explaining the function of our Beltway media stars," writing:

That really is the central belief of our Beltway press, captured so brilliantly by Cohen in this perfect nutshell. When it comes to the behavior of our highest and most powerful government officials, our Beltway media preaches, “it is often best to keep the lights off.” If that isn’t the perfect motto for our bold, intrepid, hard-nosed political press, then nothing is.

I genuinely thought it would be a very long time before someone surpassed that column's achievement in shining light on the paradoxical mind and function of the standard establishment journalist: they proudly venerate and defend extreme government secrecy at the same time they parade around as Adversarial Watchdogs and Light-Shiners on the political class. But I was wrong: today we have a column from The New York Times' Roger Cohen (presumably no relation) that accomplishes that task with even more stunning (though equally unintentional) brilliance.

Cohen observes, quite rightly, that President Obama -- who repeatedly vowed to usher in The Most Transparent Administration Ever -- has taken U.S. foreign policy almost completely underground and draped it in sweeping, anti-democratic secrecy:

The Obama administration has a doctrine. It’s called the doctrine of silence. A radical shift from President Bush’s war on terror, it has never been set out to the American people. There has seldom been so big a change in approach to U.S. strategic policy with so little explanation. . . . President Obama has gone undercover.

So finally, after a long search, we have discovered a "change" from Bush's foreign policy: whereas Bush fought his wars out in the open and with Congressional approval, Obama fights them covertly and with no public discussion, debate or accountability: he's "undercover." Cohen lists the numerous covert wars the Obama administration is fighting -- meaning wars fought without a whiff of public debate or even acknowledgement -- including in Iran, Pakistan, and Yemen (he could have added Somalia). Referring to the numerous murders of Iran's nuclear scientists (and sometimes wounding of their wives), Terrorist explosions routinely taking place in that country, and cyber attacks on their facilities, Cohen points out that it "would take tremendous naïveté to believe these events are not the result of a covert American-Israel" effort. He then notes that such fighting of covert wars is not only anti-democratic but of very dubious legality:

The U.S. government says precious little about these new ways of fighting enemies. . . . The American case for legality rests on the 2001 Authorization for Use of Military Force act . . . But killing an American citizen raises particular constitutional concerns; just how legal the drone attacks are remains a vexed question. And Iran had no part in 9/11.

In general, it’s hard to resist the impression of a tilt toward the extrajudicial in U.S. foreign policy — a kind of “Likudization” of the approach to dealing with enemies. Israel has never hesitated to kill foes with blood on their hands wherever they are.

This is a development about which no American can feel entirely comfortable. . . .[T]hese legally borderline, undercover options — cyberwar, drone killings, executions and strange explosions at military bases — invite repayment in kind, undermine the American commitment to the rule of law, and make allies uneasy.

And, of course, the one war of Obama's which -- over his objections -- was subject to a Congressional debate (in Libya) ended with Congress rejecting its authorization. But he just went ahead and prosecuted it anyway.

So that's a rather potent indictment of the Obama administration from Cohen: fighting numerous covert, possibly illegal wars around the world. Richard Nixon's covert bombing of Cambodia was one of the most scandalous aspects of his presidency, with newspapers widely condemning it; Reagan's covert mining of the harbors of Nicaragua produced similar outrage even from his own party. From the perspective of accountability, the magnitude of the secrecy behind which these current wars are fought makes Cambodia and Nicaragua look like child's play. As Cohen points out, Obama is waging covert wars in multiple countries shrouded in complete secrecy: Obama officials refuse even to confirm that there is such a thing as a CIA drone program, let alone explain their legal basis for what they do.

So Cohen, as a journalist, must be furious about this systematic lack of accountability, transparency and democracy. After all, journalists -- as they tirelessly tell everyone -- are steadfastly devoted to those values; transparency for political officials is their North Star. Surely, nobody who would devote themselves to this profession would celebrate a President who drenches his entire foreign policy in secrecy -- beyond any mechanism for democratic accountability -- and who fights numerous covert wars without even any clear legal basis for doing so? So naive and wrong one would be for assuming that:

I approve of the shift even as it makes me uneasy. . . .You have to figure that one day somebody sitting in Tehran or Islamabad or Sana is going to wake up and say: “Hey, this guy Obama, he went to war in our country but just forgot to mention the fact. Should we perhaps go to war in his?” . . . .

Why do I approve of all this? Because the alternative — the immense cost in blood and treasure and reputation of the Bush administration’s war on terror — was so appalling. In just the same way, the results of a conventional bombing war against Iran would be appalling, whether undertaken by Israel, the United States or a combination of the two.

Political choices often have to be made between two unappealing options. Obama has done just that. He has gone covert — and made the right call.

In other words, it's simply a given that war with all of these Muslim countries, including Iran, is necessary and inevitable -- despite the fact that none is attacking the U.S. or threatening to do so. Warring against all these countries is America's imperial responsibility and exceptionalist right. The only question, then, is whether the wars will be fought (a) democratically, legally and out in the open, or (b) in secret, with no legal basis or democratic accountability. Cohen, the journalist, chooses (b).

As usual, American journalists are the leading proponents not of transparency but of secrecy, not of  accountability but of covert decision-making in the dark, not of the rule of law but the rule of political leaders. As Cohen's Washington Post namesake put it: “it is often best to keep the lights off." That, with some exceptions, is the motto not only of The Washington Post but of American establishment journalism generally. That's what NYU Journalism Professor Jay Rosen meant when he said that the reason we got WikiLeaks is because "the watchdog press died." With some exceptions -- some of this we have learned about from whistleblowers leaking to reporters, who then publish it -- the American media does not merely fail to fulfill its ostensible function of bringing transparency to government; far beyond that, it takes the lead in justifying and protecting extreme government secrecy. Watching a New York Times columnist stand up and cheer for multiple covert, legally dubious wars and an underground foreign policy highlights that as well as anything one can recall.

It's time once again to ponder that profound, head-scratching mystery which Jonathan Chait, with an assist from Andrew Sullivan, so brilliantly raised:

The Obama administration has a doctrine. It’s called the doctrine of silence. A radical shift from President Bush’s war on terror, it has never been set out to the American people. There has seldom been so big a change in approach to U.S. strategic policy with so little explanation . . . . .[T]hese legally borderline, undercover options — cyberwar, drone killings, executions and strange explosions at military bases — invite repayment in kind, undermine the American commitment to the rule of law, and make allies uneasy.

President Obama has largely waged a War on Terrorism with the same authorities that Bush and Cheney waged. There's been two kinds of responses: there's been a Glenn Greenwald response, which has said: this guy is as bad as Bush and Cheney . . . . But there's been a lot of liberals who have sort of forgotten that critique that kind of came up under the Bush years. . . . criticism of what it now appears that both Republican Presidents and Democratic Presidents do.

More than 50 members of the European parliament have signed an open letter to the US government raising concerns about the treatment of Bradley Manning . . . The MEPs said internal investigations into Manning's treatment in custody, which included solitary confinement for up to 23 hours a day, inspections by officers every five minutes from 5am onwards, and removal of his clothes, had been marred by "clear conflicts of interest". They call for US authorities to grant Juan Mendez, the UN special rapporteur on torture, access to Manning. . . . "We certainly do not understand why an alleged whistleblower is being threatened with the death penalty, or the possibility of life in prison. We also question whether Bradley Manning's right to due process has been upheld, as he has now spent over 17 months in pre-trial confinement."

The one thing I noticed in my continental run-around this past week is just how mad liberals are at Obama. I remain [] baffled by this anger . . . .

It is indeed so very baffling. This is one of those bizarre mysteries of life: I find that the more you ponder and grapple with it -- as I've been diligently doing ever since it was raised so powerfully by Jon Chait -- the more inscrutable it actually becomes. Why in the world would any liberals possibly not find President Obama as dreamy as those long-time leading lights of liberalism, Jon Chait and Andrew Sullivan, do? There is no rational reason whatsoever for this disenchantment, this refusal to reverently stand and cheer for this great President. Why some liberals insist on complaining is such a deep and impenetrable puzzle that it actually makes one's head hurt trying to understand it.