America: The ally from hell

In Washington, the Pakistan-bashers are having a field day avoiding U.S. responsibility 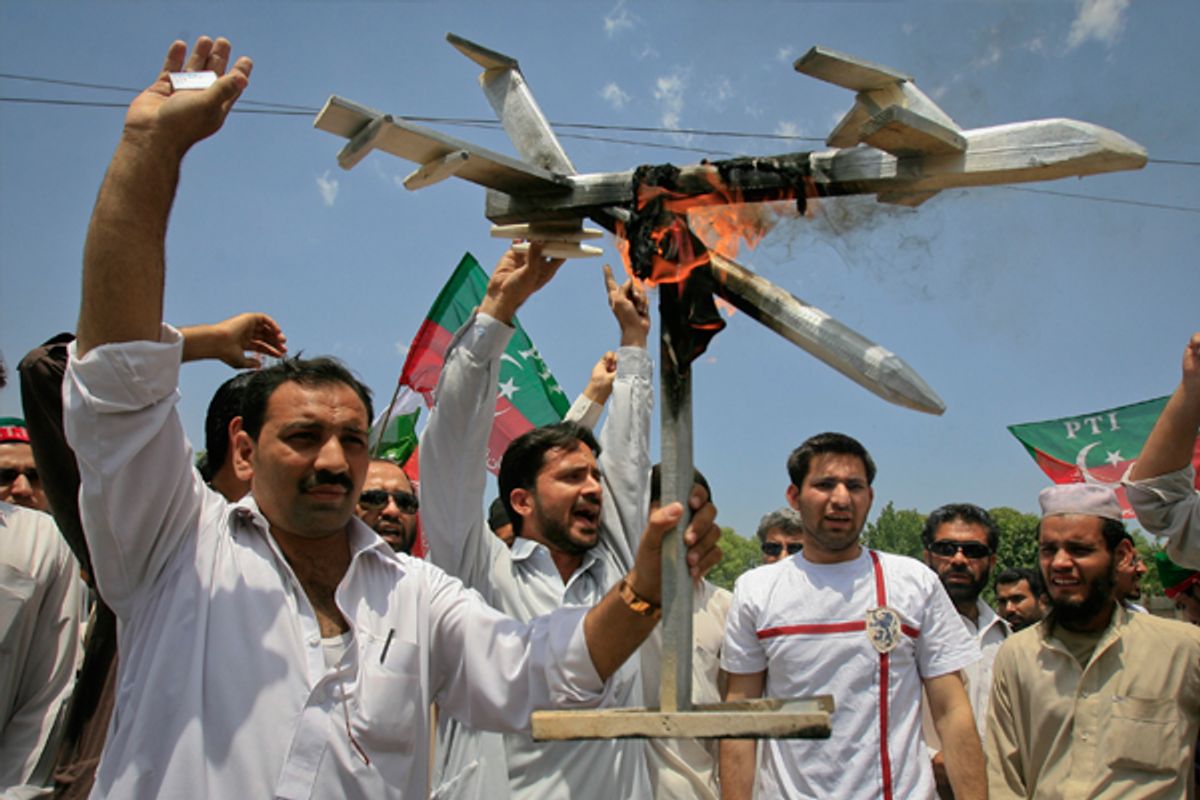 Protesters hold up a burning mock drone aircraft during a rally against drone attacks in Pakistan. (Reuters/K. Pervez)
--

If there is one thing Republican presidential candidates agree on, it’s the treachery of Pakistan. Rep. Michele Bachmann leads the pack. At last week’s GOP debate, she called Pakistan “violent” and “more than an existential threat” to the United States, because it is “a nation that lies, that does everything possible that you could imagine wrong.” Texas Gov. Rick Perry said Pakistan has “shown us time after time that they can’t be trusted.” He called for a cutoff of aid, a line that drew applause from the audience. Former Utah Gov. Jon Huntsman said on Sunday that America might have to “look for a new partner in the region” and also suggested a cutoff in aid might be in order.

It is not only GOP leaders who are obsessed with Pakistan. “The Ally From Hell,” screams the cover of this month’s Atlantic. New York’s Democratic Rep. Gary Ackerman called Pakistan “perfidious” recently, saying the country was not an ally, a friend, a partner or a teammate. “Pakistan is on its own side, period,” Ackerman said at a House Subcommittee Hearing on Afghanistan and Pakistan.

One would think from all this talk that America’s behavior vis-à-vis Pakistan has been pure and good. But the reality could not be further from the self-righteous claims persistently emanating from Washington’s complainers. America has acted no better than Pakistan in the relationship, and may even have been the worse partner. Understanding the fury over NATO’s recent killing of 24 Pakistani soldiers requires a deeper look at the relationship.

Let’s begin near the beginning. Within days of the 9/11 attacks, then-Deputy Secretary of State Richard Armitage was deputized to meet with a Pakistani official. According to Pakistan’s then-President Pervez Musharraf, Armitage said that Pakistan, if it did not cooperate unconditionally with the United States, needed to be prepared to be “bombed backed to the stone age.”

Armitage was only reinforcing Secretary of State Colin Powell’s message to Musharraf, which included a list of demands, among them full use of Pakistani airspace, closure of its borders with Afghanistan, and use of its territory as a staging base. In return, Pakistan was granted loads of cash -- and the pleasant experience of not being bombed back to the stone age.

“If the signals America gave Pakistan had been subtle, they would have been ignored,” says Anthony Cordesman, who frequently advises the U.S. government on the South Asia/Middle East region. Maybe so, but the ultimatum delivered to Pakistan established unrealistic expectations on what could be delivered. No understanding was made of Pakistan’s own interests. No attempt was made to consider Pakistani public opinion. Pakistan was not treated as an ally. It was treated as a vassal.

Had those endeavors been undertaken, Pakistan’s subsequent actions and double-talk might have been foreseen. For, while America might demand subservience and unqualified support for its campaign against al-Qaida and the Taliban, Pakistan has its own concerns. These include staying strong in a mortal struggle with India; reckoning with climate change (and the possibly related massive flooding); managing the uneasy tension between scores of different ethnic groups; and maintaining the difficult relationship between the powerful military and the civilian government.

Any arguments about Pakistan’s behavior that do not take these needs into consideration are incomplete at best. “To judge an ally by how it serves another nation’s interest at the expense of its own” is simply foolish, says Cordesman, a strategist at the Center for Strategic and International Studies.

And yet that is what consistently happens in the U.S. chattering classes. Pakistan is spoken about as if it is simply an empty land devoid of independent needs. Remarkably, Huntsman’s comments about Pakistan — he called it “merely a transactional relationship” — came the day after news of the NATO airstrikes. Something is deeply wrong with the foreign-policy conversation in Washington when Pakistan is reprimanded as a poor ally after 24 of its soldiers are killed by an American-led coalition.

Not that the deaths were unprecedented. The New America Foundation reports that 283 drone strikes in Northwest Pakistan from 2004 have killed somewhere between 1,717 and 2,680 individuals. It estimates a civilian fatality rate of 17 percent, even relying on the dubious press accounts that often describe almost anyone as a “militant.” While these deaths usually get short shrift in the American media, that is not the case in Pakistan.

“American foreign policy has created a fragile situation in Pakistan,” reads a recent blog post by a contributor to Dawn, a Pakistani daily. “Pakistan’s participation in this so called ‘War on Terror’ has shaken its foundations to the core.” On the website of the News International, the largest English paper in Pakistan, all five of the most-commented articles deal with NATO’s attack on the Pakistan soldiers.

Most commenters support the words of Pakistan’s prime minister, who warned after the attack that it would be “no more business as usual” in Pakistan’s dealings with the United States. NATO’s most recent mistake has magnified the problem, but America’s territorial incursions into Pakistan resulting in civilian deaths routinely dominate the media. In Pakistan, America is the ally from hell.

Now it should make more sense why members of the Pakistani military might not have informed Americans of Osama bin Laden's presence: They did not want U.S. incursions on their territory.

Violating Pakistan’s sovereignty is only part of the problem. Pakistan is so deeply divided that forcing it to kowtow to American wishes naturally stirs up nationalist resentments that undermine the country’s stability. In his new book, "Pakistan: A Hard Country," the journalist Anatol Lieven writes that U.S. pressure is one of the few things that can actually jeopardize Pakistan’s stability. Pakistan is not the failed state media commentators make it out to be, Lieven writes, but U.S. pressure threatens to make it so.

“No conceivable short-term gains in the Western campaign in Afghanistan or the ‘war on terror’ could compensate for the vastly increased threats to the region and the world that would stem from Pakistan’s collapse,” Leiven writes. And yet short-term gains are the focus of almost all of American commentary on Pakistan, and much of American policy.

Much, but not all. There is reason to believe that a good chunk of U.S. official fulminations against Pakistan’s perfidy are for show. “In my experience, they are all too well aware” of Pakistan’s limited ability to act as we want it to, “even if they are not going to state it publicly,” says Cordesman, who has worked for the Departments of Defense and State, and on NATO’s international staff.

A December 2009 cable from WikiLeaks supports Cordesman's view. Sent by then-Ambassador to Pakistan Anne Patterson to the State Department in 2009, the cable argues that drones are effective in killing al-Qaida henchmen, but will not succeed in entirely eliminating the terrorist group’s leadership. In the meantime, “Increased unilateral operations in these areas risk destabilizing the Pakistan state, alienating both the civilian government and military leadership, and provoking a broader governance crisis within Pakistan without finally achieving the goal [of eliminating the al-Qaida and Taliban leadership].”

Destabilizing Pakistan is the worst option of all. It is a large nation with nuclear weapons, situated between Afghanistan, China, India and Iran, with a sizable contingent of anti-American sentiment. Few things should be more disturbing to American minds than the prospect of Pakistani disintegration.

And yet that is exactly what the hawks who so loudly denounced Pakistan’s perfidy risk achieving. Remember that the next time you hear about the country’s halfhearted support for American operations in the region. Better to be halfhearted than half-brained.