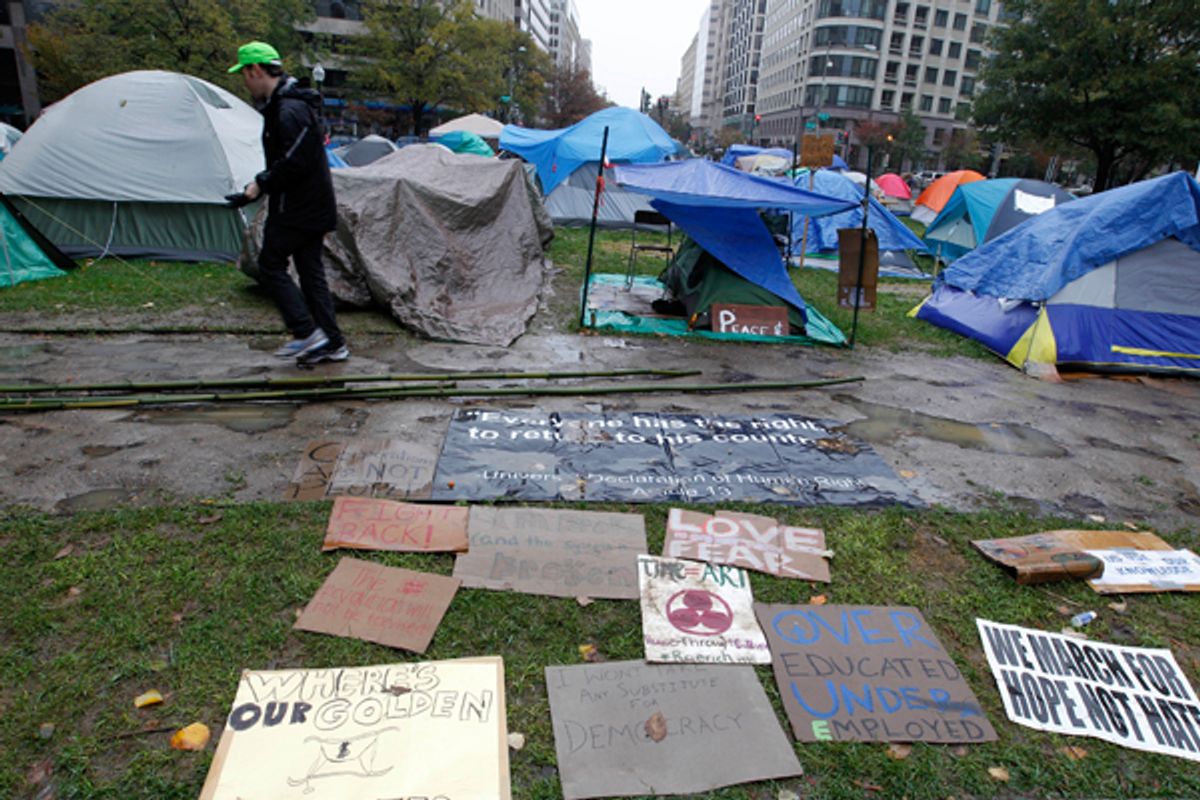 As police action against the Occupy Wall Street movement continues across the country, with arrests in Los Angeles and Philadelphia Wednesday, both occupiers and reporters have suggested Washington's two camps may face imminent eviction.

"DC may be next," said the Washington Post on Tuesday after the National Park Service handed out a circular saying the Park Police would step up patrolling of Freedom Plaza and McPherson Square in downtown Washington, "due to increasing problems of public urination and defecation, illegal drug and alcohol use, and assaults."

"We regard this as the first step toward eviction," said Kevin Zeese, a leader of Freedom Plaza camp (and a Salon contributor).

But Carol Johnson, spokesperson for the National Park Service, categorically denied it in a telephone interview Wednesday, saying, "There was no intention that this is a first notice of eviction." The circular, she said, was only intended to let the occupiers know, "We're concerned about certain things and we hope they will help remedy the situation."

The Freedom Plaza camp, located two blocks west of the White House, has a permit to stay through Dec. 30. The larger McPherson Square camp, two blocks north of the White House, does not have a permit. But Johnson indicated the Park Service has no immediate plans to enforce a ban on overnight camping at either site.

The implicit message seems to be that the Park Service is willing to overlook technical violations of the law as long as the camps are clean and the occupiers law-abiding.

"That's great news," said Zeese when told Johnson's comments. "The D.C. occupation is getting more important as the others get shut down. Washington is the center of money and power. It's where they come together, so we want to make sure we have a strong presence here.

Jeff Light, a lawyer advising the McPherson Square camp, said he never regarded the circular as an eviction warning. "It’s a reminder of what the rules are," he said. "It's clear the tents are there in support of people expressing their First Amendment rights, so we were not concerned."

The Freedom Plaza camp has applied for another permit to stay in place for January and February, Johnson said. If the camp meets the requirements, she said, "we're required to let them demonstrate."

"In all likelihood, they will work out the details," she added.

At a time when police departments from New York to Los Angeles have adopted tactics reminiscent of the so-called Miami model, used to crush an anti-globalization action in 2003, and others have speculated, without much evidence, that the Department of Homeland Security has coordinated the crackdown, the Park Service's position offers a sensible alternative: maximum respect for First Amendment expression. Call it the Washington model. If it works for Washington, why not for the rest of the country?