But will Republican primary voters really go with Newt Gingrich and his baggage instead? 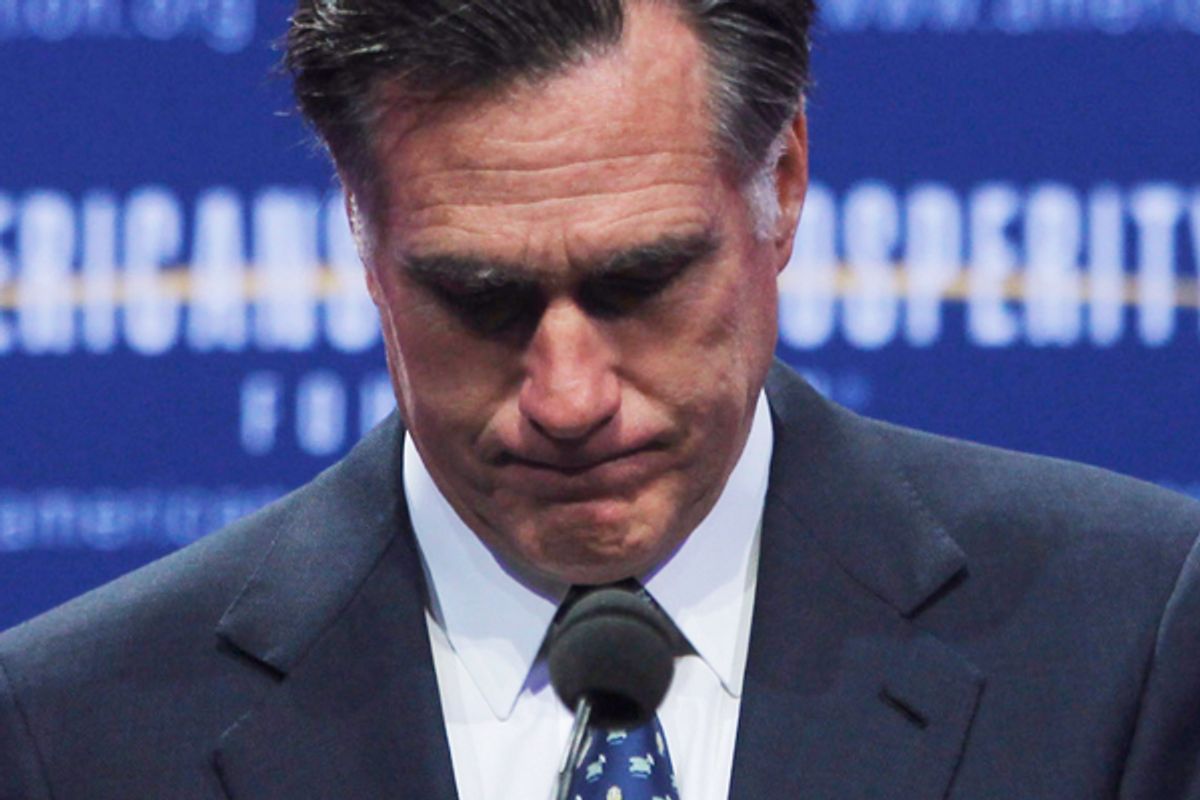 Public Policy Polling reported Tuesday that in the 13 states where it's polled multiple times, Mitt Romney's negatives have climbed over the 2012 GOP presidential campaign. His overall favorability has declined an average of 15 percent this year.

"What's most remarkable about the decline in Romney's popularity is how uniform it's been," PPP notes. "He's less popular now than he was at the start of the year in all 13 places where there are polls to compare."

Apparently, to know Mitt is not to love him – again. The great Charles Pierce reminds us this was true during Campaign 2008, when a diverse field of GOP rivals only agreed on one thing: They loathed Romney.

One of the few insights worthy of anyone's time in that horrible Game Change book was the fact that, by the end of the 2008 presidential cycle, all of the other Republican candidates had come to despise Willard. (John McCain was apoplectic on the subject, even by McCain's standards, which are considerable.) This now has seemed to transfer itself to the Republican electorate in general. Nobody likes this guy. To hell with drinking a beer with him. If they'd got stuck in a bar with Willard, the only way they'd drink hemlock with the man is if he let them go first.

The question is whether the same will ultimately turn out to be true of Gingrich.  Let's remember, his GOP colleagues despised him during much of his term as speaker. I am having a hard time believing that a GOP primary base that rejects Romney as an elitist, self-satisfied flip-flopper is going to permanently warm up to Gingrich, with his faux-intellectualism and his half-million-dollar Tiffany's credit line.  I know, I know, I'm not a Republican. But I give at least some of them credit for having a moral compass. Almost everything anyone hates about Romney is true of Gingrich.

They really are Flip and Flop. But while Romney has changed positions mainly for political gain, there's a particular stench to Newt's flipping, because it seems related to the corporate masters who have paid him millions since he left Congress. Particularly on healthcare reform, where his Center for Health Transformation raked in $37 million, he was advocating for the individual mandate, for end-of-life care, and for universal private insurance; he opposes all of those positions today. He was for Freddie Mac before he was against it, winning $1.3 million from the public-private mortgage giant to help win Republican support. He flipped on Paul Ryan's budget. In last week's debate, he expressed support for what sounded like a pathway to citizenship for undocumented workers with jobs and families; he's spent the week making sure everyone knows he only wanted to make sure low-paid workers could stay here at their low-paid jobs. Just today, he flipped on waterboarding, now calling it torture.

Besides, not everybody loves Newt — by a long shot. Tuesday former GOP Rep. Guy Molinari of Staten Island called Gingrich "evil" and threatened to "do something" to disrupt Newt's impending visit. MSNBC's Joe Scarborough, the former Florida GOP congressman who famously joined rebels against the unpopular House speaker, roasts Gingrich as a faux conservative regularly.

Romney's wealth accumulation strategy isn't admirable either. Clearly Bain Capital made its millions by buying firms and "turning them around" with an eye toward maximizing Bain's own fees, and company profits, often at the expense of workers. That great photo of Romney and the Bain boys tossing dollar bills in the air is going to look terrific in an Obama commercial if the former Massachusetts governor gets the GOP nod.

But it's seeming increasingly possible – still not likely, but possible – that he won't. Romney's stuck in the polls, Gingrich is ahead in Iowa and South Carolina, and the normal forces of gravity that have felled every other GOP front-runner may not have time to work naturally on Gingrich. It's also obvious that some of Romney's trouble has to do with his Mormon faith, which some Christian right folks consider, well, not Christian. Gingrich may be a bad Christian, with his three wives and his heartlessness toward America's poor, but he's a Christian, and Christians are forgiven.

Will Romney hit back? In a Tuesday Fox News interview, he hit Gingrich weakly, on the electability issue only:

I think I stand by far the best shot of replacing President Obama among the Republicans in the field. That doesn't mean that others wouldn't have a good shot at it, as well. But I wouldn't be in this race if I didn't think I had unique background and vision for America and the capacity to actually replace President Obama. I think to get President Obama out of office you are going to have to bring something to the race that is different than what he brings. He [Gingrich] is a lifelong politician. I think you have to have the credibility of understanding how the economy works. I do and that’s why I'm in this race.