My Brilliant Second Career: Snapshots of my life on the road

Once, I made a six-figure salary. But by taking photos of my travels, I found something better -- my creative soul 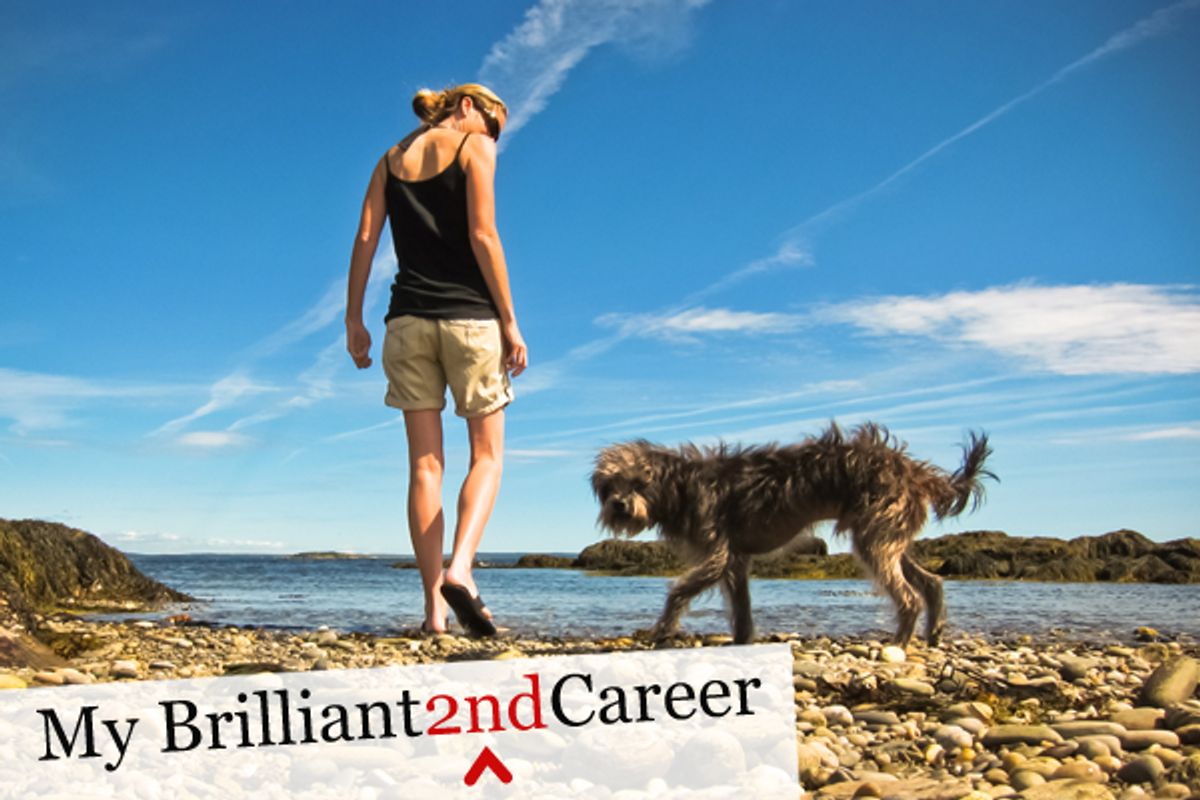 A photo of the author with her dog, Max. (Alison Turner)
--

This is a series about people who stared down the Great Recession -- and reinvented themselves along the way. Do you have a great Plan B success story? Post it on Open Salon, tag it "My Brilliant Second Career," and we might publish it on Salon -- and pay you for it.

You know all the pesky ads that pile up in your mailbox and eventually end up in your recycle bin? That was my job. I worked for years selling junk mail until I realized there wasn’t anything positive about it other than the pay and benefits. This was a six-figure job, after all.  I didn’t buy a new car or spend a small fortune on extravagant vacations or home remodels. Most evenings before I fell asleep, I would lie in bed, glued to my BlackBerry. I made sure my client’s coupons would be delivered in the mail on the exact day we discussed, though it was never as easy as it sounded. I put so much of myself into that job that I took even the details of junk mail personally. But one day I couldn’t do it anymore. I'd been saving for years, and the money couldn't keep me trapped any longer. I quit my job to find my true calling, whatever that would be.

My employers assumed I was headed to work for a competitor. When I told them I had decided to wander the country and live in a trailer, the laughter ensued. Surely I couldn’t be serious. But I certainly was: I packed up my dog, some camping gear and my camera. I wasn't sure what I was doing. I only knew I wanted to find my creative soul, which I lost when I decided to play by the rules of the corporate world.

Each morning on the road, I woke up and decided where I wanted to go. I didn’t have a set agenda or plans on how long I would be gone or what I was planning to do. I have to admit it wasn’t the best idea to venture out this way, but I wanted that freedom. At the time, I didn’t have an iPhone with handy applications to find my way. Instead, I relied on a road atlas that didn’t always warn me how things were going to be at the little tent symbol.

I started writing a blog so loved ones -- mainly my mother -- would know where I was and how I was doing. But I didn’t stay in one place too long and by the time I settled in a campsite, I usually didn’t feel like writing. Rather, I felt like drinking to toast myself on a job well done. That year, I took photographs with my point-and-shoot camera and when I did write posts, I made sure everyone knew I was having the time of my life and that leaving my job was the best decision I ever made. But in quiet hours, as I settled into my campsite, the questions sneaked into my head. I obsessed about details; I wondered what I was doing. I drank cocktails to quiet my doubts. It was exhausting to keep up my online persona as the happy adventurous spirit while I secretly stressed about what I was doing and why I was doing it. I didn't want to quit traveling -- but I did decide to quit drinking.

For the next two years I wandered the country without the trailer, without the alcohol, and with lessons learned from my first year. This time, I decided to camp in a tent instead of a trailer. A car was easier to maneuver and the trailer brought unwanted attention. I posted more and more photographs, and comments began shifting from, “You quit your job to do what?” to “What a beautiful photograph!” I always shrugged off these compliments. I would say, “It’s just a point-and-shoot camera.” In my mind, I didn’t have the right equipment or background in photography for serious work. But now that I wasn't spending my evenings sinking into an alcohol buzz, I had a lot of time to pick up a new hobby, and photography presented itself. I wasn't taking pretty pictures of sunsets or ocean views. I took photos of bird feet, tumbleweeds, my dog, Max, and odd sights along the road. The compliments kept coming.

While traveling, I didn’t keep up with the news of the world, but I knew the recession made it an uneasy time financially for me as well as for the entire country. I'd had the foresight to save my money for years before I decided to quit, but as my safety net grew smaller, I knew my time wandering around with seemingly no purpose would have to come to an end. Lucky for me, I found an entirely new revenue stream -- one I never saw coming.

A Facebook friend suggested I go camping with a group of women who gathered annually with their Airstreams calling themselves the “Silver Sisters.” I didn't know anyone, but I connected with them right away. I ended up taking pictures all weekend long. I sent the photos to people at Airstream, who liked them so much they wanted to publish them in their magazine. At the same time, a photo I took on that trip was selected for a group show at MOPLA (Month of Photography, Los Angeles). This was a huge honor and it validated a little of what people were telling me. I began to wonder: Could I actually make a living doing this?

Airstream hired me to be the official photographer of an annual event in its factory in Jackson Center, Ohio. A year and a half after I stopped drinking, I sold my 188-bottle wine refrigerator and my entire wine collection to buy a new camera. It was the best trade I’ve ever made. I bought a Canon 5D Mark ii. Portraits I took of another women’s camping group, “Sisters on the Fly,” were published in Trailer Life magazine. Soon after, the photographs I took at the Silver Sisters rally were featured in Airstream Life magazine.  I continued to travel, and the people I met opened doors I did not know existed before. I met a wonderful couple who offered to let me stay at their home in Maine if I ventured up there. I took them up on their offer and met their neighbors, whom I adored. I wrote a blog about them, which caught the interest of Maine: The Magazine, where I continued to contribute. Every opportunity led to another.

In 2011, I got more serious about photography. I continued to learn how to use my camera and decided to document the many characters I met on the road in portraits. Eventually, my passion turned to environmental portraits. This year, I had photographs published in Dog Fancy, Trailer Life and Airstream Life, which included two magazine covers.  An image of mine was selected to be in the Art of Photography show in San Diego over the summer  (15,444 entries and 109 photographs selected) and other photographs were selected for two exhibits (“Dreams” show in December 2011 and “Portrait” show in February 2012) at the Center of Fine Art Photography in Fort Collins, Colo. Earlier in the year, the Long Beach Arts Council selected a group of my images of Long Beach to be in a permanent outdoor installation at its newly renovated transit mall in the heart of the city. And lastly, another photograph was chosen by Photographer’s Forum to be in its hardcover book, “Best of 2011,” coming out in December.

I used to try to convince people that quitting my job was the right thing to do, but I don't have to do that anymore. The fact is, I have learned to live with less, and while I know I won’t be making the same amount financially, that is fine with me. I know, in my heart, it was the right thing to do for me. It can be scary to be out here, particularly during a recession, but being my own boss has its rewards.  I don’t have to answer to anyone but myself. I am not suggesting that you should quit your job to hit the road, like I did. For me, I made the decision only after careful consideration. But because of this experience, I've reconnected with my creative soul. I'll never leave it again.