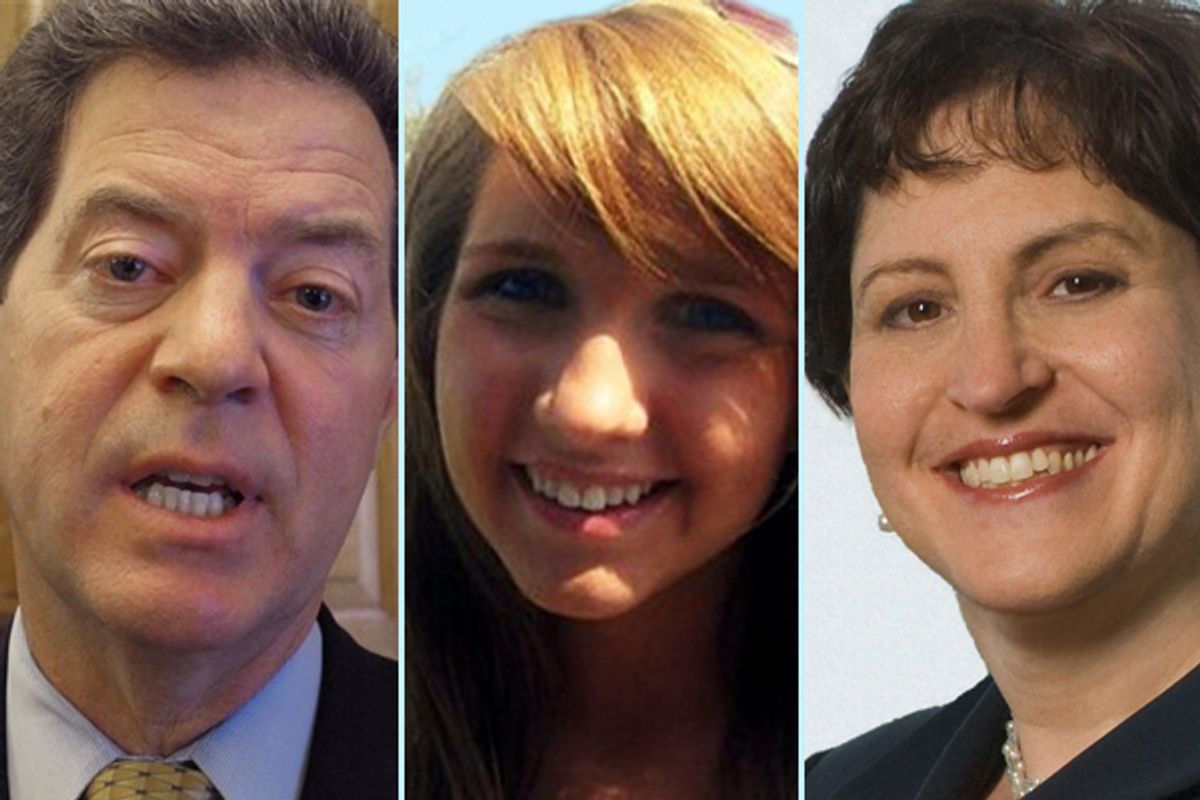 Yesterday, The New York Times' Roger Cohen displayed a core value of American political journalism -- love of government secrecy -- as he applauded President Obama for conducting what he described as numerous covert, lawless wars without a shred of transparency, democratic debate or accountability. Today, The Washington Post's Ruth Marcus reveals another (related) leading journalistic value -- extreme deference to those in political power -- with a column denouncing Emma Sullivan, the 18-year-old high school student in Kansas who committed the crime of saying something disrespectful about the Hon. Sam Brownback, her state's Governor.

Sullivan attended a school-sponsored event at which Gov. Brownback spoke, and during it, tweeted to her 60 followers: "Just made mean comments at gov brownback and told him he sucked, in person. #heblowsalot." Sullivan did not in fact say anything to Brownback, but merely expressed this sentiment on her Twitter feed. Brownback's staff monitors Twitter for references to their boss, saw Sullivan's tweet, and then creepily complained about it to school authorities. The school's principal demanded that Sullivan apologize to Brownback, but she steadfastly refused (backed by her mother, who said: "I raised my kids to be independent, to be strong, to be free thinkers. If she wants to tweet her opinion about Governor Brownback, I say for her to go for it and I stand totally behind her"). After the story turned Sullivan into a mini-hero (her Twitter following exploded from 60 to more than 15,000), it was Brownback who was forced to issue a statement saying: "My staff overreacted to this tweet, and for that I apologize."

Needless to say, Marcus finds Sullivan's conduct to be terribly upsetting and wrong. First, the journalist questions whether Sullivan, as a student, even has a Constitutional right to write what she did ("Sullivan has a First Amendment right to express her views — although not unlimited"); it's always inspiring when journalists become the lead advocates for legal limits on political speech. But then Marcus gets to her real point: it is wrong to speak so ill of our nation's honorable leaders:

Emma Sullivan, you’re lucky you’re not my daughter. . . . If you were my daughter, you’d be writing that letter apologizing to Kansas Gov. Sam Brownback for the smart­alecky, potty-mouthed tweet you wrote after meeting with him on a school field trip. . . .

Also, that smartphone? The one you posed with, proudly displaying the tweet in which you announced that Brownback “sucked” and added the lovely hashtag #heblowsalot? Turned off until you learn to use it responsibly.

I may sound alarmingly crotchety here, but something is upside down in the modern world, which has transformed Sullivan into an unlikely Internet celebrity and heroine of the liberal blogosphere. . . .

The Constitution does not grant teenagers the fundamental right to have a cellphone or use foul language on it. The parental role is to inculcate values of respect for authority — even those you disagree with — and the importance of civil discourse. It’s not to stand up for your little darling no matter how much she mouths off.

Behold the mind of the American journalist: Marcus -- last seen in this space three years ago demanding that Bush officials be fully shielded from all accountability for their crimes (the ultimate expression of "respect for authority") -- wants everyone to learn and be guided by extreme deference to political officials and to humbly apologize when they offend those officials with harsh criticism. In other words, Marcus wants all young citizens to be trained to be employees of The Washington Post. In a just world, Marcus' column would be written instead by Sullivan's mother, who exudes what the journalistic ethos should be -- "I raised my kids to be independent, to be strong, to be free thinkers. If she wants to tweet her opinion about Governor Brownback, I say for her to go for it" -- but people who think that way only rarely receive establishment media platforms. Instead, we're plagued with the Ruth Marcuses of the world -- "inculcate values of respect for authority"!!! -- and that explains a lot.

UPDATE: In August, 2010, Obama Press Secretary Robert Gibbs condemned liberal critics of the President, saying: "I hear these people saying he's like George Bush. Those people ought to be drug tested." Marcus not only wrote how much she agreed with Gibbs' outburst, but added some bitter little insults of her own: "The complainers from the left are, in some combination, myopic, forgetful and deranged." She then continued her petulant name-calling on television. That's the same Ruth Marcus who, today, devoted her column to demanding that an 18-year-old high school student apologize to the Governor based on what Marcus lauded as "the importance of civil discourse." If the student had instead written that "Brownback is deranged and should be drug tested," that presumably would have met Marcus' lofty discussion standards. Then again, probably not: notice how, in Marcus' mind, it's fine for government officials and media personalities to use the most inflammatory, insulting language aimed at citizens (get drug tested, you deranged losers), but it's time for a stern civility sermon (and a humble apology) when it's the other way around. The only question at this point is whether Marcus -- who is married to an actual censor, Jon Leibowitz, the Chairman of the Federal Trade Commission -- is driven more by drooling authoritarianism or gross hypocrisy. The Washington Post Op-Ed page is truly the belly of the beast of America's rotted media discourse.