Is the right starting to deceive itself about the general election prospects of a guy whose baggage has baggage? 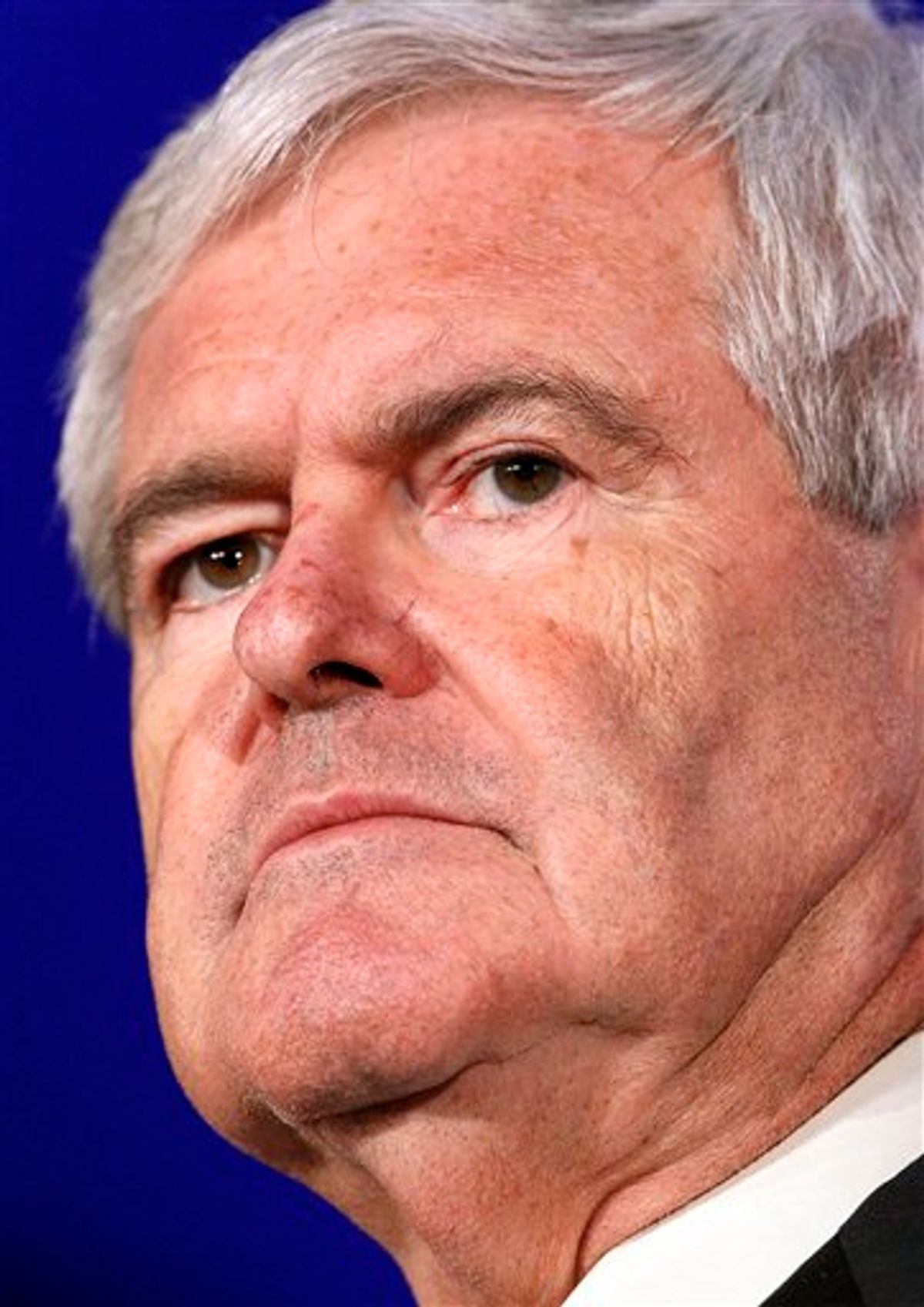 It seems logical enough to assume that if Republican primary voters are thinking about electability when they go to the polls next year it will be good news for Mitt Romney and bad news for Newt Gingrich.

After all, Romney is supposed to be the safe option -- the conventional, generic, vetted and well-rounded candidate who won't scare off  the pivotal swing voters who are inclined to throw out Barack Obama because of the rotten economy -- while Gingrich would bring formidable baggage and no shortage of self-destructive tendencies into a general election campaign. This helps explain why Romney has been running about 4 points better than Gingrich in head-to-head match-ups with Obama, according to the RealClearPolitics average.

Republicans have seemed to understand all of this; a poll last week gave Romney a 15-point edge over Gingrich on the question of electability. But if you think this assessment is set in stone, think again: It's possible that Gingrich, if he surges into a clear, sustained lead over Romney and continues to erase what were once sky-high negative ratings, will come to be seen by Republicans as their best general election bet -- no matter how flawed such a conclusion would be.

The reason has to do with a human tendency to work backward in forming opinions -- deciding first what you want the outcome to be, then coming up with a rationale for it. When it comes to politics, this means that the more that voters want to support a certain candidate, the harder they will strain to justify it.

We've seen how this can distort perceptions of electability before. In the 2000 GOP primaries, the polling evidence seemed inarguable: John McCain was performing far, far better than George W. Bush against Al Gore. McCain, logically enough, tried to incorporate this into his campaign message, promising Republicans that he'd beat the vice president "like a drum." But Republican voters wouldn't hear of it. McCain was their enemy and Bush was their friend; this is what they'd been told by scores of GOP elected officials, activists, interest group leaders and media personalities (Bush had the party establishment wired, don't forget). The pro-Bush line on electability was almost comically absurd -- McCain was only outperforming Bush against Gore because "mischievous" Democrats were trying to trick Republicans into nominating a weak candidate -- but that didn't stop Republican voters from buying into it.

When it comes to Gingrich, we may now be seeing the basis for a similarly flawed-but-potent argument emerge.

It starts with the increasingly popular notion among conservatives that Gingrich, with his dramatic delivery and constant smart-sounding references to history and policy minutiae, is uniquely suited to go toe-to-toe with Obama in debates.  As National Review's Jonah Goldberg put it a few weeks ago:

Talk to rank-and-file conservatives about such a matchup and they grow giddy, like nerds asked if they’d like to see a battle between Darth Vader and Gandalf the wizard. Ask them if they’d like to see an Obama versus Romney debate (the thrilla with vanilla!) and they shrug. Meanwhile, if you nominate Gingrich, you’ll get a ticket to the fight of the century.

Gingrich has been doing his best to reinforce this, vowing to challenge Obama to a series of three-hour, moderator-less debates (and to chase him around the country if he refuses to accept) and boasting that he'll even allow the president to use a teleprompter if he wants. These taunts delight conservatives, many of whom are convinced that a skillful debater could easily expose Obama as a mindless dolt whose only talent involves reciting words written by others.

In reality, the idea that Gingrich is Obama's worst nightmare is ridiculous; for all of the reasons that Joan Walsh wrote about recently (and many, many more), there would be a celebration for the ages inside the White House if he somehow wins the nomination. But on the right, it seems to be gaining resonance.

Now add in a new poll released Wednesday afternoon that showed Gingrich running 2 points ahead of Obama. The result was prominently featured on the Drudge Report and certainly caught the right's attention. Yes, there's a catch: The poll is from Rasmussen Reports, which was knocked by Nate Silver after last year's elections for presenting "biased and inaccurate" data that tended to overstate support for Republican candidates and positions. But this apparent pro-GOP bias has also established Rasmussen as the go-to pollster for many top conservative media outlets and commentators. Thus, to the average Republican, news that a Rasmussen poll suddenly shows Gingrich ahead of Obama probably isn't cause for skepticism as much as it is confirmation that Gingrich really is a sound November option. (That another recent Rasmussen poll put Romney six points behind Obama probably bolsters this impression.)

Plus, some of the most influential Republican voices in the country are urging their audiences to regard talk of Romney's electability advantage as a product of the liberal media -- "It's all BS," Rush Limbaugh told his millions of listeners on Wednesday. "Are you tired of hearing all of this about 'If the Republicans nominate fill-in-the-blank, then Obama wins?'" he asked. "They're all electable!" Sean Hannity has been making a similar case on his television and radio shows for months now.

This suggests that electability probably isn't the primary season weapon that Romney's camp hopes it is. If Republicans decide that they want to nominate Gingrich, then they'll convince themselves that he's as electable -- or more electable -- than Romney. And if Gingrich, like every other non-Romney candidate who's surged to the front of the pack this year, ends up shooting himself in the foot and fading, then Republicans will keep saying what they've been saying until now -- that Romney is the electable guy. The key, though, is that impressions of the candidates will probably drive impressions of electability, not the other way around.