Occupy DC distances from Democrats. Or does it?

A high-dollar fundraiser, a rowdy crowd of demonstrators, and Rep. Donna Edwards 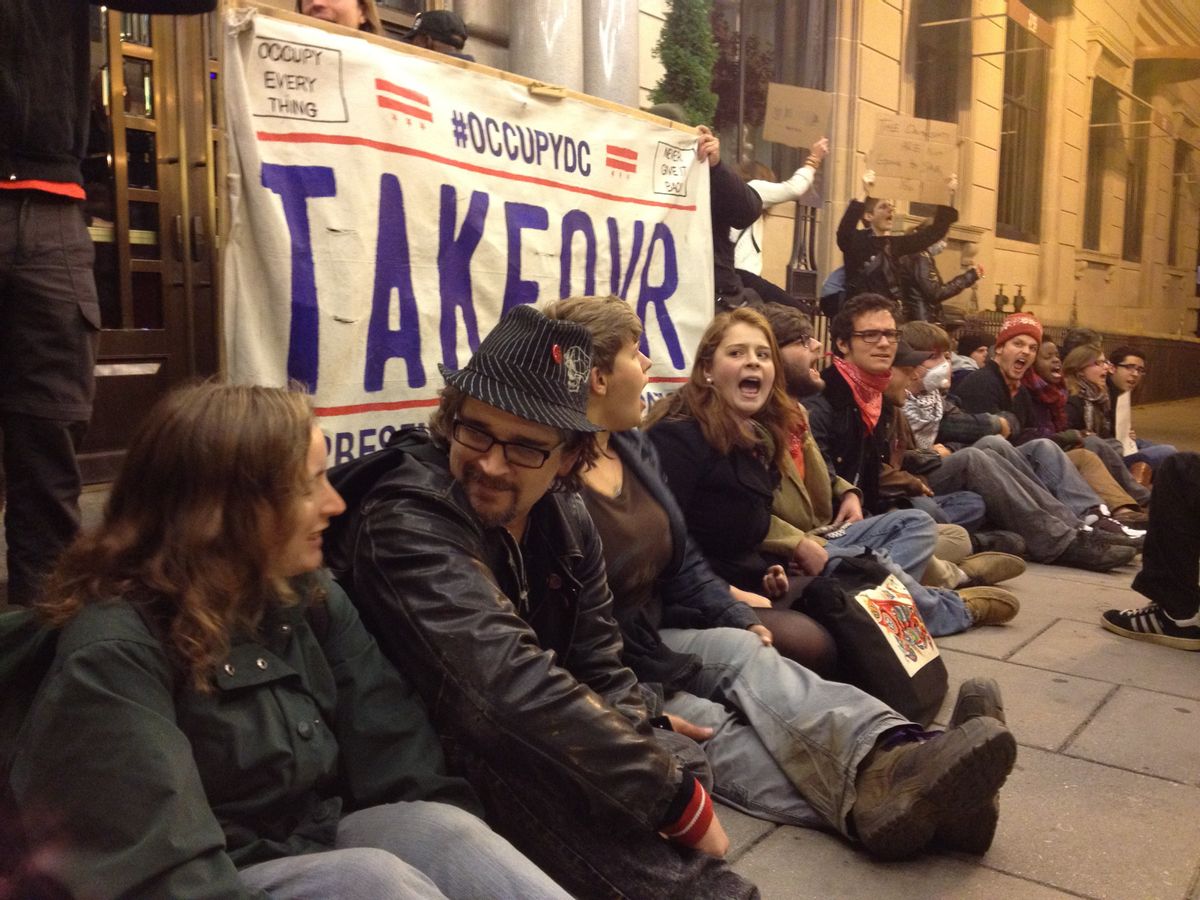 The more than 100 DC occupiers who marched from McPherson Square Wednesday night to protest outside two high-dollar fundraisers for 15 House Democrats, including Arizona Rep. Gabrielle Giffords, carried what seemed an especially clear message for a movement so often criticized for lacking focus.

As one sign put it: "Democrats are part of the 1 percent."

Occupy DC ostensibly sought to declare its independence Wednesday night from the Democratic Party, the liberal activist group MoveOn.org and the Service Employees International Union (SEIU), all of whom, protesters fear, are trying to co-opt the movement to win votes in 2012 and advance an agenda equally as corrupt and beholden to monied special interests as that of Republicans.

But amid the shouts, drums and slogan-chanting, the divisions within Occupy DC surfaced over what to make of a congressional Democrat who makes a quiet, public and strong statement of support for a movement that has come under a violent crackdown from police in Los Angeles, New York and other cities.

The differences became evident two-and-a-half hours into the protest outside the W Hotel in downtown Washington, the site of the second of the two Democratic Congressional Campaign Committee fundraisers targeted by occupiers last night. Tickets to the fundraisers, held blocks away from the White House, ran between $5,000 and $75,000 apiece.

The D.C. Police had formed a human chain across the front entrance of the W, opening up a makeshift hallway against the side of the building, so guests and stone-faced members of Congress, hoping to go unrecognized, could slip inside.

Not Rep. Donna Edwards of Maryland. On her way out, Edwards tried to step through the line of police and put on a look of disappointment when she couldn't. She walked around and moved front-and-center of the group, waited politely until the last speaker finished.

The surprise appearance was bold. Earlier that day, the occupiers had been stood up by Democratic Rep. Elijah Cummings, also of Maryland, who canceled his plans to address the encampment at McPherson Park at 5 p.m. Some speculated Cummings got cold feet when he found out the group would be marching against Democrats. (A spokesman said his schedule was too full.)

"I stand with the 99 percent," she announced.

Edwards said people in her district had lost homes and their jobs and seen their incomes fall to less then $50,000-per-year, the lowest median income in decades.

"It's not fair. It's not right. And it's time," she said, pausing for effect, "for us to occupy America."

A roar of cheering approval, drum-pounding and whistle-blowing ensued. Edwards quickly walked off.

"Thank you, to Rep. Edwards, from Occupy DC!" said the man who had introduced her. More cheers.

A young man named Charles Davis, 27, took to the floor and called out for the group's attention. Davis told the occupiers he had ridden in an elevator with Rep. Luis Gutierrez of Illinois.

"And he joked that he is the 1 percent," Davis hollered. Boos all around. "And he called us anarchists!"

"The Democrats are not your friends!"

The group cheered -- but not as loudly as they had for Edwards. Davis' message, meant to reinforce the theme of the night, seemed to fall flat in the excited aftermath of Edwards' appearance.

The night had been going so well.

Protesters had set out from McPherson Square around 5:30, stopping traffic as they marched south down the middle of 15th Street. Eddies of pedestrians swirled on the sidewalks -- men and women who stopped to point, gawk, snap cellphone pictures and call friends. ("The Occupy Wall Streeters are walking right by me!")

At the first stop outside an office building just up the sheet from the W Hotel, fidgety DCCC aides stood blocking the doorway, as the occupiers filled the cold night air with drumbeats and shouted slogans:

"Hope and change, that's a lie! Lis-ten to Occupy!"

"No more pay to play!" hollered one protester. Shouted another: "We hope the meal was worth the price of democracy!"

Cheers erupted when someone appeared on the third floor balcony and hoisted a sign that said, "Housing is a human right!"

Edwards had somehow knocked the group off its message.

"She's turning this into a campaign stop," Davis said, after he addressed the group.

All three third-party groups had tested Occupy's patience in recent weeks. Jones had angered occupiers earlier in November with his response when CNN’s Suzanne Malveaux suggested Jones might be a “leader” of the Occupy movement. “There are a lot of us,” Jones had said, before calling the group “leader-filled.”

On its website, the DCCC is running a petition that lists as its goal:

Davis worries that Occupy DC could become a subsidiary of the Democratic Party, much like the Tea Party was for Republicans.

"It's been kind of a problem, especially here in D.C.," he said. "People think the Democrats are their friends, and they're kind of willingly being co-opted. A lot of the people involved in the Action Committee, for instance, are paid to elect Democrats."

Such may be the nature of protest in the political city, where most everyone falls into one of two categories. Of course, there aren't many Republicans living in D.C.'s two Occupy Wall Street encampments.

"I think it's just the culture," Davis said. "It's maybe a little bit more politician-friendly than other Occupies around the country."

Paul Quinlan is a writer in Washington.