Pick of the week: An OWS-era "Coriolanus"

Pick of the week: The great Ralph Fiennes turns director with a dazzling, action-packed Shakespeare reboot 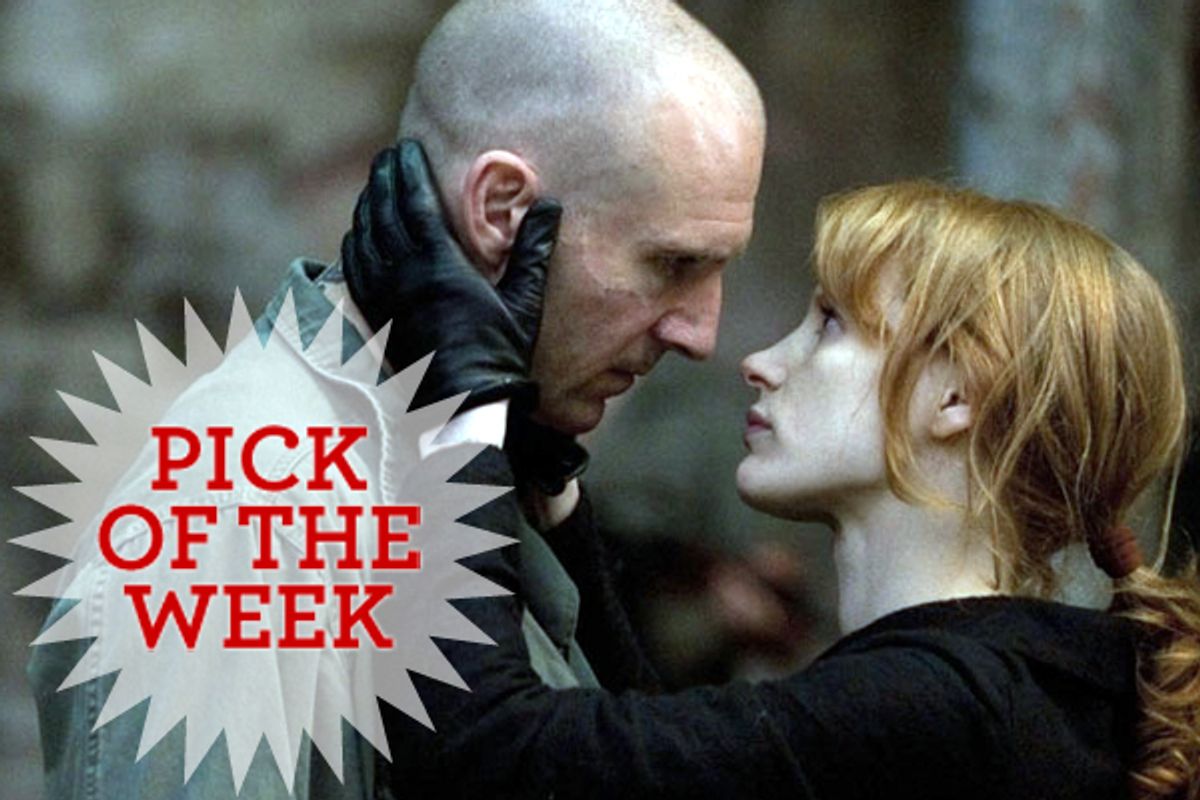 "Coriolanus" is a tough nut to crack, a violent and enigmatic puzzler that holds a special place in the hearts of Shakespeare performers, scholars and buffs. It sounds almost heretical to suggest that this brutal drama about a proud Roman general who betrays his own people might be Shakespeare's greatest play, or greatest tragedy, especially when you've got "Hamlet," "Macbeth" and "King Lear" next to it on the shelf. But T.S. Eliot, Frank Kermode and others might sign that petition. The story of Caius Martius Coriolanus, a controversial historical figure of the 5th century B.C., has been understood almost since its debut 400 years ago as a potent political allegory for times of crisis -- and when in modern political history do we not face a crisis?

When Ralph Fiennes premiered his knockout action-flick adaptation of "Coriolanus" earlier this year in Berlin -- it stars himself in the title role, along with Vanessa Redgrave, Gerard Butler, Jessica Chastain, Brian Cox and a crackling supporting cast -- some people saw echoes of the Arab Spring and Tahrir Square in its contemporary setting and its startling, witty use of technology. (Fiennes and screenwriter John Logan have staged many of the play's conversations between Roman citizens and politicians as TV talk-show chatter or panel discussions.) At the New York Film Festival in September, it was impossible not to feel the similarities to the burgeoning Occupy Wall Street movement; "Coriolanus" opens with an uprising of ordinary Roman citizens who are "resolved rather to die than to famish" and who are enraged by the patricians' domination of food and wealth. When Menenius (played by Cox), a popular politician -- let's say a beloved Democratic senator -- tries to talk the mob down from violence, one angry citizen sums up the misdeeds of the 1 percent:

They ne'er cared for us
yet: suffer us to famish, and their store-houses
crammed with grain; make edicts for usury, to
support usurers; repeal daily any wholesome act
established against the rich, and provide more
piercing statutes daily, to chain up and restrain
the poor. If the wars eat us not up, they will; and
there's all the love they bear us.

Uncanny, I know. On one hand, when Bertolt Brecht set out to do a 20th-century Marxist rewrite of "Coriolanus," he discovered that almost everything he wanted to say and do, including his famous "alienation effect," was already in the play. On the other hand, so were all the counter-arguments. It's hardly original to observe that Shakespeare had an unusual ability to present profoundly flawed heroes and contradictory points of view, but even by his standards the subtlety and complexity and bleakness of vision (to use Fiennes' own phrase) found in "Coriolanus" are remarkable. It was briefly banned by a French socialist government in the late '30s, as a work that lent aid and comfort to the fascist movement, but less than 20 years later Laurence Olivier would stage it as an anti-fascist parable, himself playing Coriolanus as Mussolini.

Fiennes' crackerjack "Coriolanus" stays true to the clever, almost mean-spirited twists and turns of the story, and preserves the authentic flavor and texture of the language. This is a Shakespearean's Shakespeare built around a cast of dazzling actors, not a Hollywoodized treatment. At the same time it's a smashing directing debut, a highly cinematic action movie with a man's man at its center. Unlike the Bard's other tragic heroes, Coriolanus is not prone to doubts or fears, or at least does not reveal them to us in soliloquy. He is at home in war but totally lost in politics and openly contemptuous of the common people; he makes decisions, never second-guesses them and lives or dies with the consequences. Is Shakespeare endorsing this model of martial, proto-fascist leadership? It's an awfully soft-boiled question; does he support Lear's parenting skills, or Hamlet's sophomoric dithering? One way of answering it is to say that Shakespeare admires Coriolanus for being true to his own nature, but also observes that those who dissemble most effectively live long and prosper.

Great actors don't always make good directors, but Fiennes has made a vivid and gripping film that engages the mind, the eye and the viscera. There's no hint of vanity in his performance as Caius Martius, who earns his famous sobriquet from the Roman Senate after vanquishing the Volscian rebels and their commander, Tullus Aufidius (Gerard Butler) in the city of Corioles. These explosive battle sequences, like the rest of the film, were shot in Serbia, and are much closer to the balls-out, brutal excitement of a war movie by Stanley Kubrick or Oliver Stone than to costume drama. Back in Rome, the newly minted war hero is an obvious choice to be elected consul, but his pride and arrogance make him a reluctant candidate at best, and he's no match for the scheming tribunes Sicinius (James Nesbitt) and Brutus (Paul Jesson), who turn populist unease to their own purposes.

If one pole of the movie is the charismatic Butler as Coriolanus' obsessed arch-nemesis, Aufidius, the other is Vanessa Redgrave's smoldering, tyrannical performance as Volumnia, one of the greatest ruthless mothers in literary or dramatic history. As she deliciously informs Coriolanus' shrinking-violet wife, Virgilia (Jessica Chastain), Volumnia takes more delight in her son's military victories than she would in a husband's sexual caresses, and she thanks the gods that he returns from war with 27 wounds, a number so impressive it ought to ensure his elevation to consul. Those who seek to read a Freudian or sexual element into Volumnia's relationship with her son do not need to dig deep; as she explains, "The breasts of Hecuba/ When she did suckle Hector, look'd not lovelier/ Than Hector's forehead when it spit forth blood/ At Grecian sword."

Restaging a Renaissance drama in modern dress with all the technological trappings of our day can sometimes seem gratuitous, but Fiennes' "Coriolanus" is a near perfect fit. It feels like the televised story of a public figure's rise and fall in some country we recognize but cannot quite identify: The uniforms and weapons look American, the voices are approximately British Commonwealth, the setting appears European but nonspecific. If the last third of the film loses potency just a little, after Coriolanus makes the radical decision to accept exile from Rome and sign up with his arch-rival Aufidius, that may be because we know -- as Shakespeare's audience knew, as everyone since the days of Livy and Plutarch knew -- that this won't end well for anyone.

Fiennes wasn't trying to make an Occupy Wall Street "Coriolanus" or a Tahrir Square "Coriolanus"; the fact is, this play is always politically relevant but isn't, at heart, about politics at all. The greatest dramatist the Western world has ever known (or will ever know, most likely) was always more interested in family psychology than in sociology or political science. Hamlet is a son first and foremost, Lear a father, Macbeth a husband. "Coriolanus" is the story of a frustrated mother and the ultra-masculine son she perversely dominates and destroys. A proto-feminist parable? Maybe that's a stretch, but that story too resonates across the centuries, and Ralph Fiennes has rendered it as an acerbic, resonant, troubling film, one of the year's very best.

"Coriolanus" opens this week in New York and Los Angeles, with national release to follow in January.