Why Coke's new can infuriated the Internet

Regular Coke in a white can? Someone forgot the lesson of New Coke -- don't mess with our soda 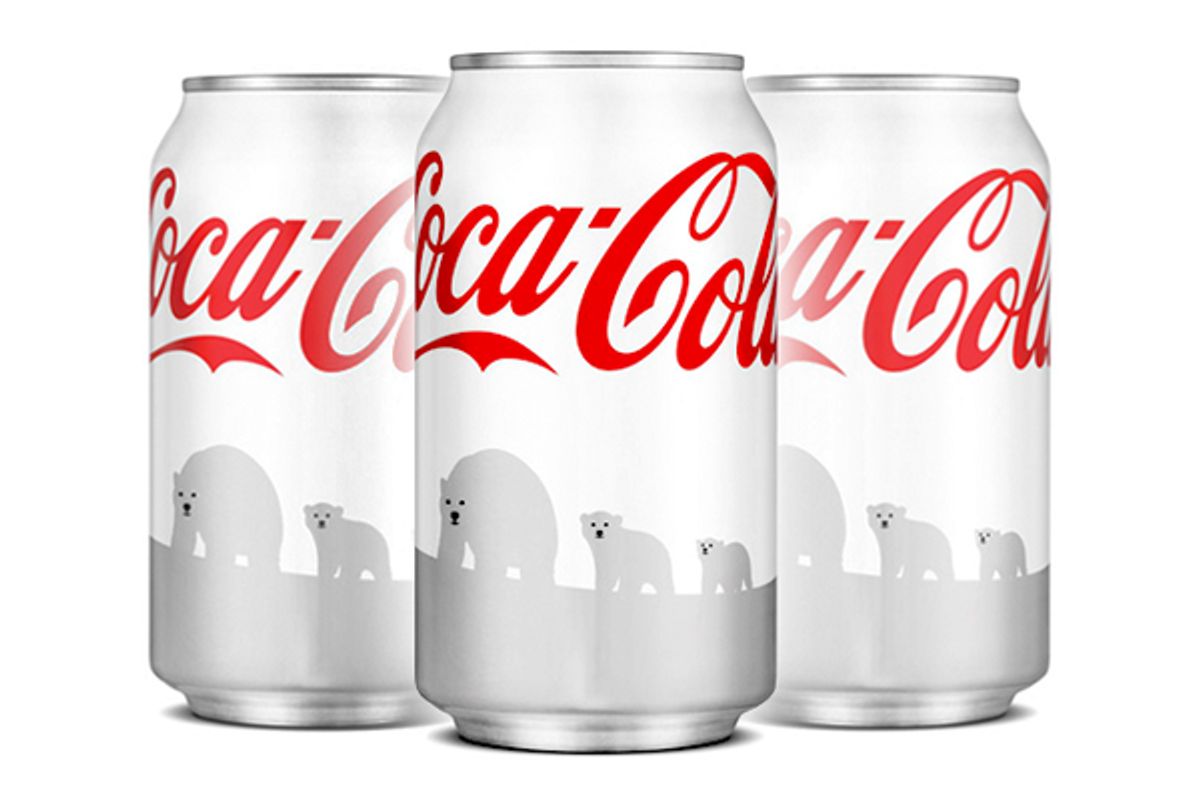 The misleading package has long been a go-to marketing move for off-brands. Who among us has not inadvertently picked up a bottle of John Adams beer in her time, or a big box of Special J cereal? Usually, it's a clever – and quite deliberate -- exploitation of our expectations. Corporations know that it's the design that sells, that our eyes beeline for the familiar. But what happens when the original messes with our heads? Customers know that a green circle means Starbucks coffee, the golden arches mean McDonald's. A red can is a Coke. Well, not so fast...

Just in time for the holidays, the cola titan recently rolled out a festive new can design -- an homage to its seasonally iconic polar bear cans, and a reminder of Coke's relationship with the World Wildlife Fund. As the Wall Street Journal reported Thursday, "the company has frequently rung in the holiday with special can designs" in the past. But this time was different. This time all hell broke loose. So let's just get a few things straight so we never have to go through anything like this again: You don't win friends with salad. Stop trying to make "fetch" happen. And regular Coke does not belong in a white can. How are we supposed to distinguish regular and diet?

It didn't take long for irate consumers to register their confusion and displeasure. A Twitter and Facebook backlash against the "blasphemy" promptly ensued. A diabetic customer in Denver told ABC News that "I purchased three six-packs because I thought they were diet," adding that "they need to make it so it is not confused." Anecdotally, a friend reports today that when she was out recently with another pal, the woman sent back a white can of Coke, assuming it was the dreaded diet version. Diet Coke, by the way, doesn't even come in a white can. It's silver. But at a glance, the polar bear version and the diet can do look mighty similar.

Of course, plenty of fans like the white cans just fine, and as one user noted on Facebook, "It is still the same great stuff on the inside!" And the contentious cans, inevitably, are now selling on eBay. Company spokesman Scott Williamson, meanwhile, told the WSJ that "The white can resonated with us because it was bold [and] attention-grabbing." But though the company insists the white can is a success, it is now rolling out red polar bear cans as well – something it hadn't mentioned when the white holiday cans first arrived weeks ago.

Sure, there's Cherry Coke, Coke Zero, Coke with lime, low-carb Coke and more. But those of us who are particular about our colas know that diet and regular Coke are two very different beasts. (And then there's Mexican Coke, the most beautiful Coke of all. But that's another story.) They are different heart and soul, outside and in. Pepsi, the "choice of a new generation" that "refreshes everything," may play fast and loose. But Coke? As in "the real thing"? As in "Coke is it"? As in "always" Coca Cola? You do not screw with that.

Companies forever refine and tweak. If they didn't, Betty Crocker would still look like Laura Bush.It may seem a trifling matter, but as we recall from the great New Coke fiasco of '85, there are some things that should not be messed with. And that's the real reason for the outcry. It's not about a lazy inability to distinguish regular from diet. It's about the potent ideal Coke itself perpetuates – solid, dependable, and goddammit, red. Coke fan Mel Cyr explained to the Journal this week, "You can't change something that's classic.'' But as Coke has learned, you can. You just can't guarantee that consumers will swallow it.