How Shakespeare got me through unemployment

I was depressed and broke, but I found inspiration in an unlikely way -- reading all of the bard\'s plays out loud 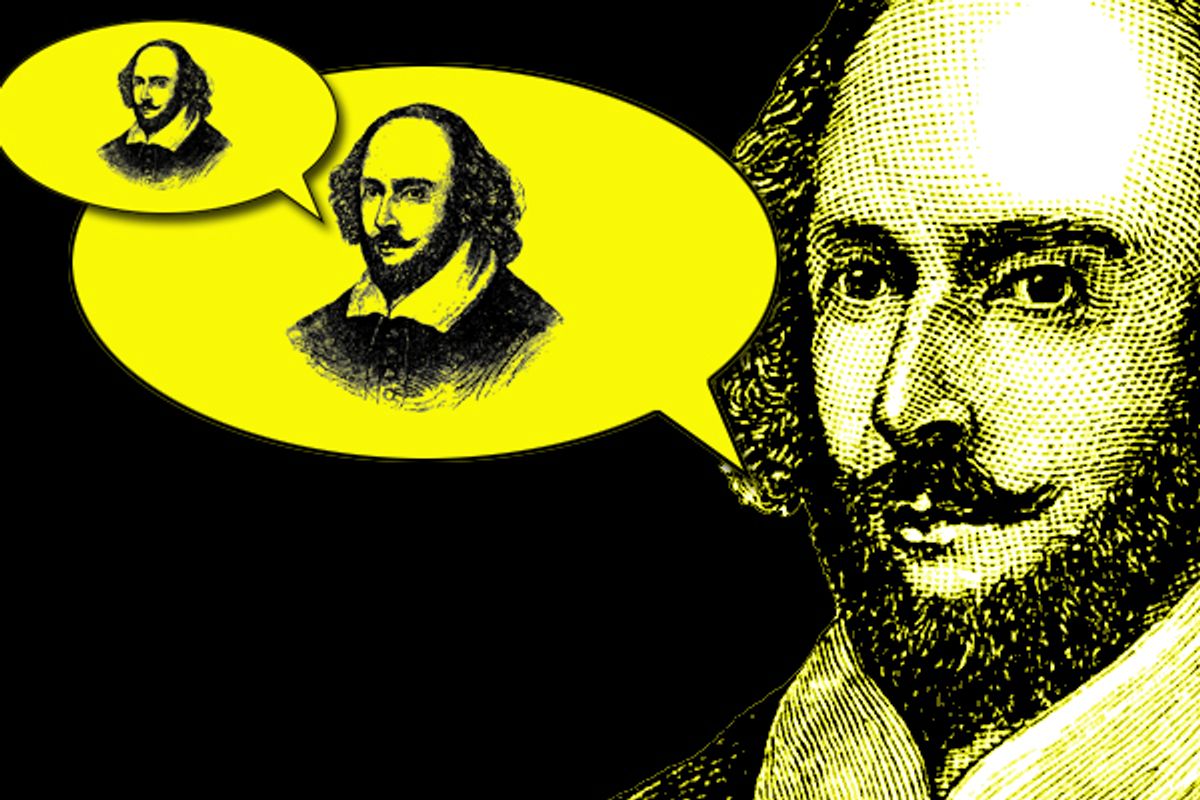 Three years ago, at one of the lowest moments of my life, I started doing something I never thought I'd do.  I'm reading every single play William Shakespeare ever wrote.  And I'm reading most of them aloud. From the three dour Henry VIs, through all of your Macbeths and Romeos and Hamlets, all the way to nutty Cymbeline and beyond.

I'm not a Shakespeare scholar. Or an actor. I read them as part of a Nashville Shakespeare Festival program called "Shakespeare Allowed!" which invites a group of strangers to gather at a giant square table in the downtown library and read one speech or line at a time, round-robin-style, regardless of gender or acting ability. (Others silently read along in the periphery, except during crowd scenes, when everyone homina homina hominas.) Over the years, people have tried to read lady parts in high voices (embarrassing) or French parts in French voices (disastrous) or ghost parts in, I don't know, ghosty voices, but it never pans out. Eventually people settle down into their normal reading voices, because it's really about the text and the simple act of reading in front of other people. It sounds as tedious as a toothache -- but it's been thrilling.

It began when I was in the midst of a particularly gruesome period of under-employment and depression, having decided to go out on my own as a freelance designer at the exact moment that the economy collapsed. It was positively, well, Shakespearean. Finding free entertainment was quite a challenge, and so one day, while flipping through an actual newspaper, I noticed an article about the Shakespeare Allowed! project and decided to go see what it was all about. I showed up at the library the first Saturday of the month and was amazed to see 40 eager people jammed into a tiny conference room, books in hand, ready to read "The Comedy of Errors." I knew within 10 minutes that I'd be busy the first Saturday of every month.

As far back as high school, Shakespeare seemed like something I could admire but never truly love or understand. Like everyone ever born, I had to memorize and recite (disastrously, in the end) Mark Antony's "Friends, Romans, countrymen" speech in English class, but that was about the extent of my Shakesperience. But here I was, in a roomful of everyday people, reading in their everyday voices, and as the lines flew by and the pages turned, I saw -- or, rather, heard -- a whole world opening up to me. Shakespeare no longer seemed impenetrable. And I had a sneaky feeling there was nothing going on in my life that he didn't have an angle on. If I showed up every month, I'd discover them all.

The first few times I hid in the corner and read along silently. It took a few months before a freakishly low turnout forced me to sit at the grown-up table and read aloud from "The Merry Wives of Windsor." At first, it wasn't exactly a natural feeling, and no matter how many times I peeked ahead to see which line I'd get, the words never quite tripped off my tongue. I mangled a lot of lines. But there was no denying the thrill I felt when I managed to get to the end of a longish speech and realized there was a grin a mile wide on my face. Suddenly I wanted all the long speeches, all the big moments. From that moment on, the library would have to be on fire for me to give up my reading chair.

My unemployment dragged on for a year, half bad economy, half lack of ambition. Twelve Shakespeare plays. The very idea of having another play to read kept me going from month to month. Sure, I might not have been able to pay my mortgage or eat anything other than spaghetti for weeks on end, but once a month I could lament the loss of my Juliet and then drink a vial of poison. Or, as Henry V, I could return to England, where ne'er from France arrived more happy men. In comparison to Romeo and Prince Hal, I didn't really have that many problems. My depression began to lift, and I started sitting at my desk more often, calling and emailing people, looking for work. Miraculously, after a few tiny freelance jobs, a client offered me a job, the one I still have today.

But still I kept going to read Shakespeare aloud. And it became clear to me that there was a debt to pay. To the Shakespeare Festival, to the library, to Shakespeare himself, for getting me through an extremely dark time. I started telling everyone within earshot about the program so that more people would come. The first year, I volunteered to work at Shakespeare in the Park over a dozen steaming Tennessee August nights (I now know "Love's Labours Lost" by heart) and worked the crowd with my donation bucket, talking my head off about reading Shakespeare aloud. People donated money and scurried away, pointing at the grinning crazy person. The second year, finally employed, I donated more money than I've ever donated to any organization in my life as thanks for providing me with so much pleasure. It was the most fun I'd ever had writing a check. I didn't even try to write it off.

The project also made me a better reader. In the beginning, I'd read and read and have no clue what I was saying; we were three-fourths of the way through "The Merchant of Venice" before I realized Shylock wasn't the Merchant of the title.  But as we worked through the canon, I found myself discovering that the whole point of the project -- to simply read the plays aloud -- got me halfway to understanding the text. It was amazing how that text seeped into me without my even knowing it. While reading "King Lear," Lear's final death speech ("Why should a dog, a horse, a rat, have life, And thou no breath at all? Thou'lt come no more, Never, never, never, never, never!") fell to me, and I had no idea I was even understanding it until I got to those five "nevers. " Shakespeare didn't give me just one to say, he gave me five. Five. Five grieving nevers, spoken by a heartbroken, dying king. To my surprise, I was in such a state of tears I almost had to pass the rest of the speech to the person next to me. After that, I was known as "the guy who cried." When, almost inevitably, Mark Antony's "Friends, Romans, countrymen ..." speech came my way, I repeated half of it from memory, having kept it stored somewhere after my fumbled high school recitation. I had no idea I still remembered it, but there I was, riding the unforgettable bicycle of Shakespeare.

We read the last play -- "The Two Noble Kinsmen" -- last month. This weekend, we'll meet at the library for catered hors d'oeuvres and we'll talk about the plays that pleased and surprised us ("Merchant" and "Pericles," which would get staged more often if people knew it was full of pirates and zombie princesses) and the ones we were puzzled by ("Timon of Athens," "All's Well That Ends Well"). We'll probably be a little sad and a lot smug. Then we'll all separate and go home and flip the calendar to January, and mark the first Saturday of the month, when Shakespeare Allowed! begins all over again with "Henry VI, Part 1." Three more years of mistaken identities, jealous rages and brooding Danes. I'll be there reading the plays again, with a funny little group of misfit toys who've all managed to find this one thing we all adore, for all different reasons. I love having a job now, but I'll never take a job that keeps me from my perpetual Saturday noon dates. Shakespeare saved my life, and I owe him that much.