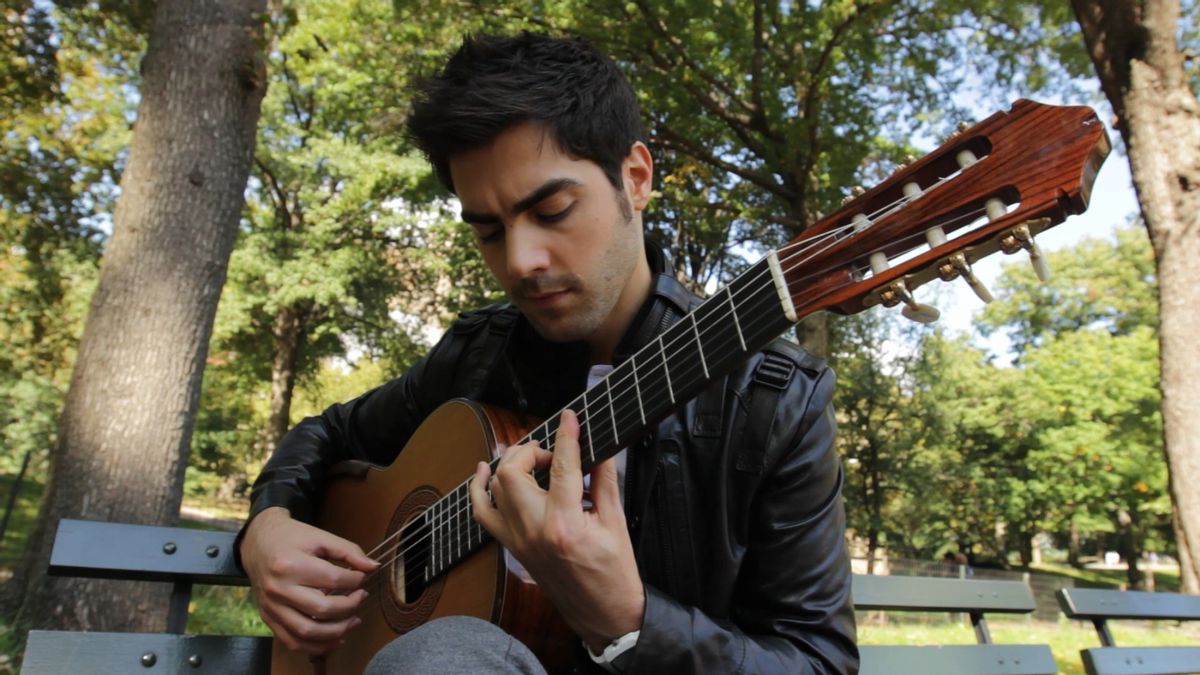 At the age of 28, guitarist Milos Karadaglic is a rising star in the classical music world -- “Young Artist of the Year,” according to the Gramophone Awards in London. Milos is an advocate for his instrument, wanting the guitar to regain its profile in the classical world. He wouldn’t mind wooing some rock audiences, too, and why not? He’s darkly handsome, charismatic, and his fingernails are as sharp as daggers.

Fresh from his Carnegie Hall debut, Milos talks with "Quick Hits" host Marco Werman about being inspired by the legendary Andres Segovia while growing up in Montenegro in the '90s during the Balkan wars. He also performs four beautiful pieces, at the nearby Klavierhaus recital hall and on a bench in Central Park.

Perhaps our favorite piece that Milos performed for us at Klavierhaus on "piano row" right around the corner from Carnegie Hall is "Recuerdos de la Alhambra" by Francisco Tarrega. It's so very Spanish, sad, melodious, and it displays Milos' incredibly fast and intricate finger work. As he says, his fingers just begin to fly.

“Prelude #1” is probably the hardest to play of all the pieces Milos performed for “Quick Hits," requiring the most concentration. At the end, he sighs "phew" and smiles in apparent relief. For fans of classical guitar, this is the show-off piece from a young man who says the guitar is his best friend.

“Oriental” by Enrique Granados is the final track on Milos Karadaglic’s debut album on Deutsche Grammophon, “Mediterraneo,” a musical tour of his interior and geographical world.

When Milos was a novice guitarist, he hoped the instrument would win him girlfriends. It was when his father played a record for him of the beloved Andres Segovia that he realized he wanted to play that kind of music for lots of people. "In my ears, and in my whole body, something happened," Milos remembers. Today, he doesn't try to make it happen. He's not in control when he plays. As in, he doesn't think about it. "When I play," says Milos, "I just play."

Watch this interview and you’ll see that Milos Karadaglic already has the composure, the confidence and the easy charm of a movie star, which may horrify classical music purists. But all you have to do is listen to him play to realize he’s more than a poster boy for the classical guitar. He’s smart, self-deprecating, funny and a sensitive, gifted musician. His fingers are fast, and his intonation is perfect.

As Milos tells “Quick Hits” reporter Marco Werman, his discovery of his musical gift coincided with the wars in the Balkans in the 1990s. Those conflicts didn't engulf his native Montenegro as much as other parts of the region. But he still came to see music as a sanctuary and as a universal language, with the power to soothe, to excite and to unite.

Watch Thursday in the Park with Milos on PBS. See more from SOUND TRACKS.

We coaxed Milos out of the recital hall to wander around in the sunlight and play for us on a park bench. The result is a short, dreamy piece, "Granada" by Isaac Albeniz, that our video producer/editor, John MacGibbon, turns into an ode to New York and Central Park.