"Actions are held to be good or bad, not on their own merits, but according to who does them" 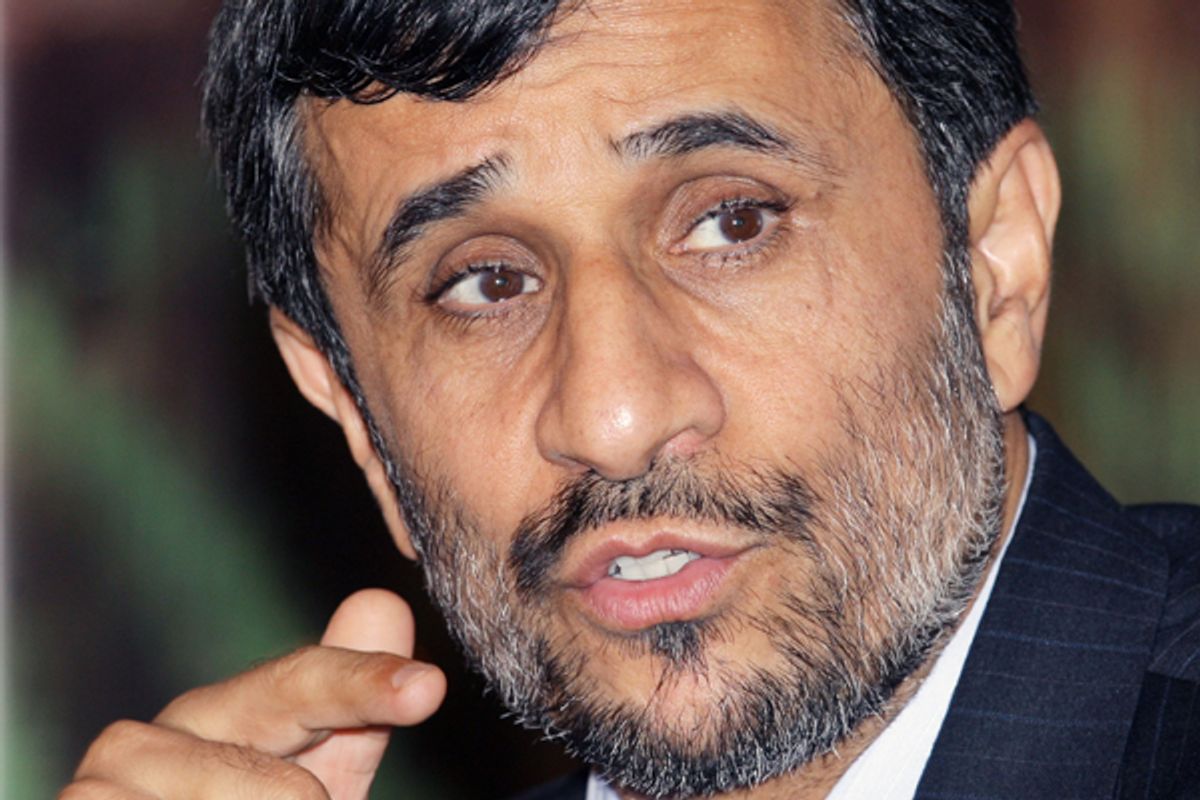 The U.S. has long had Iran virtually encircled as a result of the American occupation of Afghanistan on Iran's Eastern border, its invasion of Iraq on its Western border, its NATO ally Turkey hovering on Iran's Northwestern border, some degree of military relationship with Turkmenistan on Iran's Northeastern border, and multiple U.S. client states sitting right across the Persian Gulf (Kuwait, Saudi Arabia, the UAE, and Bahrain, where the massive U.S. Fifth Fleet is stationed). Additionally, some combination of the U.S. and Israel has bombarded Iran with multiple acts of war over the last year, including explosions on Iranian soil, the murder of numerous Iranian nuclear scientists (in which even one of their wives was shot), and sophisticated cyberattacks. Meanwhile, top American political officials from both parties are actively demanding that an Iranian revolutionary cult be removed from the list of Terrorist organizations (just coincidentally, they're all on the cult's payroll). In the past decade, the U.S. and/or Israel have invaded, air attacked, and/or occupied Afghanistan, Iraq, Pakistan, Somalia, Yemen, Libya, Lebanon, Sudan, Syria, the West Bank and the Gaza Strip (to say nothing of the creation of a worldwide torture regime, a system of "black site" prisons around the world to which people were disappeared, and a due-process-free detention camp in the middle of the Caribbean Ocean where many people remain encaged for almost a full decade without charges). During this same time period, Iran has not invaded, occupied or air attacked anyone. Iran, to be sure, is domestically oppressive, but no more so -- and in many cases less -- than the multiple regimes funded, armed and otherwise propped up by the U.S. during this period. Those are all just facts.

But -- despite all of these facts -- all Serious people in the U.S. know that Iran is the Aggressor, the Modern Nazis, a True Menace, while the U.S. and Israel are its innocent peace-loving victims. Today, Iran claims that it took down an American drone flying over its country (either by shooting it down or overtaking its control system). Iran has made similar claims before, but this time the U.S. admits it last week lost a drone flying over what it claims was Western Afghanistan (not Eastern Iran). Between the intense wall of secrecy behind which the U.S. government operates and the less-than-reliable nature of the pronouncements from both governments, we'll likely never know what happened for sure. In any event, this is yet another case of increased tensions between the two nations, and it's thus time for yet another round of Those Evil, Provocative, Aggressive Iranians (because, of course, no peace-loving nation -- such as the U.S. -- would ever dare shoot down an Iranian drone if it flew over their soil; in fact, just imagine the massive retaliatory response that would be triggered if Iran were found to be flying drones over American soil, let alone simultaneously killing U.S. scientists, causing explosions on U.S. soil, backing U.S. Terrorist groups, and launching cyber attacks on U.S. nuclear facilities, all while occupying Canada and Mexico with more than 150,000 troops). In light of these belligerent U.S. actions and threats -- along with seeing how the U.S. treats countries without a nuclear capability versus those who have one -- nothing is more rational than Iran's wanting a nuclear weapon.

Given the extensive violence and aggression the U.S. has perpetrated, and continues to perpetrate, on numerous countries in that region, one might think that not even our political culture could sustain the propagandistic myth that it is Iran that is the aggressor state and the U.S. that is its peace-loving victim. But, of course, one who thought that would be completely wrong. Not only is it a widespread belief, but it's virtually mandated orthodoxy. But none of that should be at all surprising or confusing, given that 66 years ago, George Orwell -- in his 1945 Notes on Nationalism -- explained exactly the warped form of thinking that creates this mindset:

All nationalists have the power of not seeing resemblances between similar sets of facts. A British Tory will defend self-determination in Europe and oppose it in India with no feeling of inconsistency. Actions are held to be good or bad, not on their own merits, but according to who does them, and there is almost no kind of outrage — torture, the use of hostages, forced labour, mass deportations, imprisonment without trial, forgery, assassination, the bombing of civilians — which does not change its moral colour when it is committed by ‘our’ side. . . . The nationalist not only does not disapprove of atrocities committed by his own side, but he has a remarkable capacity for not even hearing about them.

I've cited that passage before, but it really does explain so very much (and that form of thinking extends beyond nationalism to all tribal loyalties). It's how a country that has repeatedly invaded, occupied, bombed, and killed civilians in numerous other nations over the last decade can look at a country that has done little or none of that (but has been practically surrounded by all that aggression) and be convinced: they are the Evil aggressors and must be stopped at all costs.

UPDATE: One other point: whenever you dare to suggest a comparison between the United States of America and whatever country happens to be the New Hitlers of the moment, you get accused of moral relativism. That has always struck me as so bizarre, because moral relativism actually refers to precisely what Orwell described: "Actions are held to be good or bad, not on their own merits, but according to who does them, and there is almost no kind of outrage — torture, the use of hostages, forced labour, mass deportations, imprisonment without trial, forgery, assassination, the bombing of civilians — which does not change its moral colour when it is committed by ‘our’ side." As Rudy Giuliani said when asked if waterboarding is "torture": "It depends on who does it." That is moral relativism.

Two incidents that occurred on Sunday--Iran's claim of a shoot-down of a U.S. drone, and an explosion outside the British embassy in Bahrain--may have been unrelated. But they appear to add to growing evidence that an escalating covert war by the West is under way against Iran, and that Tehran is retaliating with greater intensity than ever.

Asked whether the United States, in cooperation with Israel, was now engaged in a covert war against Iran's nuclear program that may include the Stuxnet virus, the blowing-up of facilities and the assassination or kidnapping of scientists, one recently retired U.S. official privy to up-to-date intelligence would not deny it. . . . By accident or not, it's entirely possible the covert war could escalate into a real one, experts say.

Where is the legal basis to wage a covert, unauthorized war against Iran? That question, of course, matters little, because American political culture accepts that the President's power should be unfettered in these areas no matter what that old, tired, quaint, obsolete Constitution says. As John Yoo put it: such matters "are for the President alone to decide." It's just extraordinary how little concern is raised over the fact that the U.S. -- to some degree or other -- is clearly waging a covert war against Iran.