The money I poured into a religious sect

My sister said Kabbalah helped her cope with our mother's death. Would it work for me? 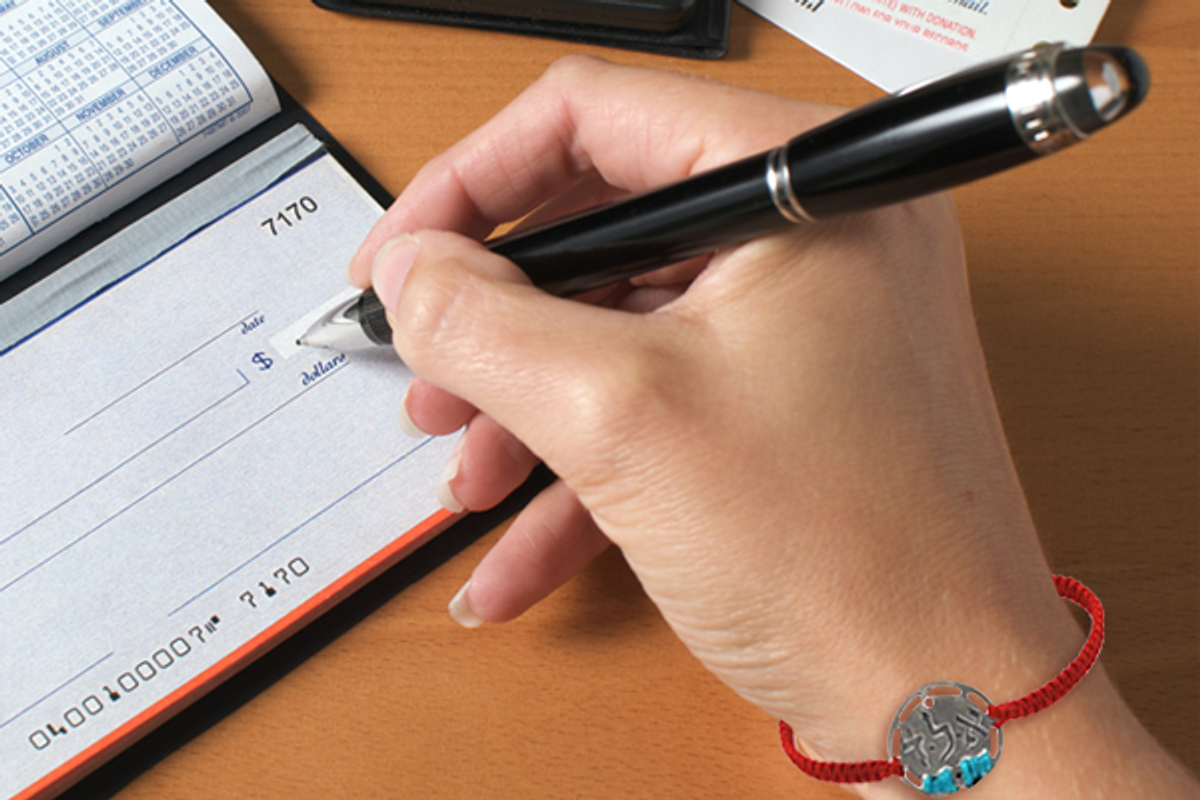 Twelve years ago, in staccato breaths, my sister came home to our bachelorette apartment and told me she’d had a breakthrough at a Kabbalah establishment in Manhattan over the loss of our mother. She’d been taking courses for a few months and, in a private meeting with the rabbi, at his suggestion, Jas simultaneously screamed and tapped her heart chakra when she heard a crack and felt a gush of pain. In that instant all her buried emotions erupted forth — things she’d never allowed herself to feel. Then she felt forgiveness, acceptance and finally peace.

It all sounded so hokey, and yet I couldn’t help feeling envious. I wanted to experience that gush of emotions. I signed up for the course, along with my brother, Greg and his soon to be wife, Lauren. Tuesday nights, we carpooled into Manhattan together, and scribbled furiously in our notebooks as Rabbi Jehudi, with his thick beard and tailored suit, explained to us — and the 60 other emotionally stunted people who’d paid a few hundred dollars for the class — that we couldn’t play “the game of life” well until we’d learned the rules.

Rabbi Jehudi instructed us to “scan” the 72 Names of God by running our finger from right to left over a photocopied chart of Hebrew letters. These letters, we were told, included all the “sequences of DNA consciousness” that provide healing, success, protection and fulfillment in every aspect of our lives.

It took yogic concentration to keep a straight face, but I somehow managed, even with Greg’s elbow jabbing at my side. With the rest of the class I ran my finger over the laminated page from right to left, blocking from my mind that I did not read Hebrew, and focusing on the idea that the physical connection was enough. Whether it was because I’d skipped dinner, or because I was less cynical than I’d thought, I can’t say, but in that instant what I can only describe as a zap of electricity coursed through me, and I was all but sold.

After a few months of taking courses, I started going to Shabbat at the rabbi’s house in Queens. The room was split in half with folding partitions. Thirty women sat on one side, 40 men on the other. The men wore all white. The women wore wigs and skirts. I was told that the separation wasn't anti-feminist; if anything, women were thought to be on a higher spiritual plane, and men were the lowly beings who sorely needed to hear the prayers — without the distraction of looking at women.

My 28th birthday I spent dipping myself into a Mikveh tub at the Manhattan complex. The room was a sort of spa, with lockers, showers and a small round pool. Jas stood at the edge with me, and scanned the prayer that was taped to the wall. We dropped our towels and immersed ourselves in the magical water, dunking our heads 20-something times, and letting the water absorb all of our negative energy. Afterward, I felt lighter, and lightheaded. I also couldn’t stop laughing. What the hell were we doing?

And yet, except for the occasional head-rearing of self-awareness, I had grown as superstitious as my fellow practitioners. The basic premises of the classes — that I needed to take responsibility for my life, and that everything is cause and effect — weighed heavily on me. What had I done to warrant locking my keys in my car during a snowstorm? What did it mean that I’d cut my finger while chopping onions? Was this rash on my arm really due to gossiping (apparently all skin conditions were)? What could I do to rid my life of chaos?

I wanted to balance my “tikkun,” or “soul’s correction” that I’d inherited from my parents and from my past lives.

For $2,000, I booked a room and meal package at the Marriot Marquis for “Rosh Hashanah Event 2000.” Thousands of people from all over the world attended, including, of course, Madonna (as well as Marla Maples, and Monica Lewinsky). As the Shofar mooed, I leaned my head back and saw a speck of blue light. It grew to the size of a nickel and began to pulse like a very large heart. Later, the "Hevrahs," full-time Kabbalah volunteers, congratulated me. Blue was healing light, and I must be on a high spiritual plane to see such light.

But was I actually feeling better? To be honest, I wasn’t sure. To know if Kabbalah was working, the rabbi had told us, just take stock of your life. Have you changed “your movie”? My movie was pretty much the same since I’d started Kabbalah. I was still far too susceptible to outside influences, although I fancied myself wiser. And that unpredictable sadness still crept in from time to time, and left me stunned. At the beach, watching a mother and daughter walk along the shore together — seeing the way their hips and calves were shaped the same, the younger and the older versions of the same woman — I lost it.

Driving to the cafe I owned one afternoon, I decided to give it my best shot. I rolled up my windows, screamed and tapped my chest. Nothing happened. Nothing cracked open. Deciding that my technique was lacking, I called the establishment and arranged a private meeting with the rabbi; he wasn’t available but his wife, Rebecca, also a teacher there, offered to see me later in the week.

Sitting at her desk, littered with picture frames of her five children, Rebecca played with a strand of her brown wig, and listened to my complaints about my mild depression with a scowl on her face. When I mentioned how I was struggling to come to terms with my mother's death, she asked why I "chose" to come down to a mother who would die. She also told me I needed to stop worrying so much about myself, and start thinking about other people.

I began “tithing.” I offered my cafe as an additional place to hold classes. The place was primarily a night spot, and so in the mornings, Rebecca ran a women's group on Tuesdays, and Rabbi Jehudi used the place for an office on the other days. I gave him the key, and the alarm code, and when he told me he really needed a laptop, I gave him my computer. A few weeks later, when he told me that the PC didn’t really have the functionality he needed, I gave him $1,100 towards a Mac.

At the establishment, I took more classes: the study of irises, auras, palms and faces. The rabbi showed photocopied faces of strangers. Could we tell which faces were humanitarians, and which were SS officers? The humanitarians had perfect symmetry to their faces. The SS officers had asymmetrical faces, and too much sclarel show — too much white showing in the eyes — a telltale sign of a murderer.

From there, I squinted and stared at unsuspecting people, at the bank — the movies, the diner — and tried to get a glimpse of their auras. (The most effective way to do this was to stare at a person as he stood against a white wall, since auras have many colors.) On dates, I studied lines on mens’ faces — as well as my own (my forehead lines showed sexual issues) — and tried to discern who would be a spiritual mate, even though Rebecca had told me that women were the spiritual pioneers in the relationship, the “vessels” to receive the “channels.”

I volunteered for Meal on Wheels, Big Brother Big Sisters and Fish, a senior citizen driving program. I mailed money orders to people anonymously, planted trees, mailed checks to any organization that asked for a donation — it was, after all “an opportunity to give” — and never walked through Manhattan without spare change and singles in my coat pockets.

One afternoon, Jas called to apologize for forgetting to leave her half of the mortgage, and told me to write the check myself from her checkbook. It was then that I realized how many, many thousands and thousands of dollars she had been giving. Seeing all those numbers back to back did not sit right with me. I called Greg and told him that I was starting to suspect that the three of us might be brainwashed.

“Starting to suspect?” He laughed, and mimicked a robot, “I Am Not Brainwashed. Must Give More Money Or My Soul Will Melt.”

The first of the three of us, he had no choice but to disentangle himself; as a struggling musician back then, he simply couldn’t afford to keep up.

I went next. The money issue was certainly a huge part of my reluctance to continue, though I have since learned that not all Kabbalah institutions charge; in fact, there are many ways to study Kabbalah for free. I just so happened to pick a place that put a great deal of emphasis on money. The bigger problem was that I had somehow lost my own voice in the process.

Sept. 11would shake me loose. On that morning as I was waiting for the Tuesday women's group to start, Rose, one of the group members, walked in and told me to turn on the radio. I did. Then I rushed to Greg’s apartment, the nearest place, to turn on the television. Dumbfounded, we sat together watching the news that afternoon, like the rest of the country.

The following week, Rebecca showed up at the cafe, and gave the women's group her take on 9/11. She told us that for some time now, New York City had been a vortex of selfishness, self-absorption and intolerance, and that everyone who died called their death into their lives. I looked around the room, and saw faces that were having a hard time accepting that interpretation. I definitely was. While I still had respect for the core principles of the study, it was time to stop deifying others and trust my own thoughts — however selfish they may be.

Heather Siegel is the author of "Out from the Underworld" (Greenpoint Press, 2015).