Who's winning the abortion war? 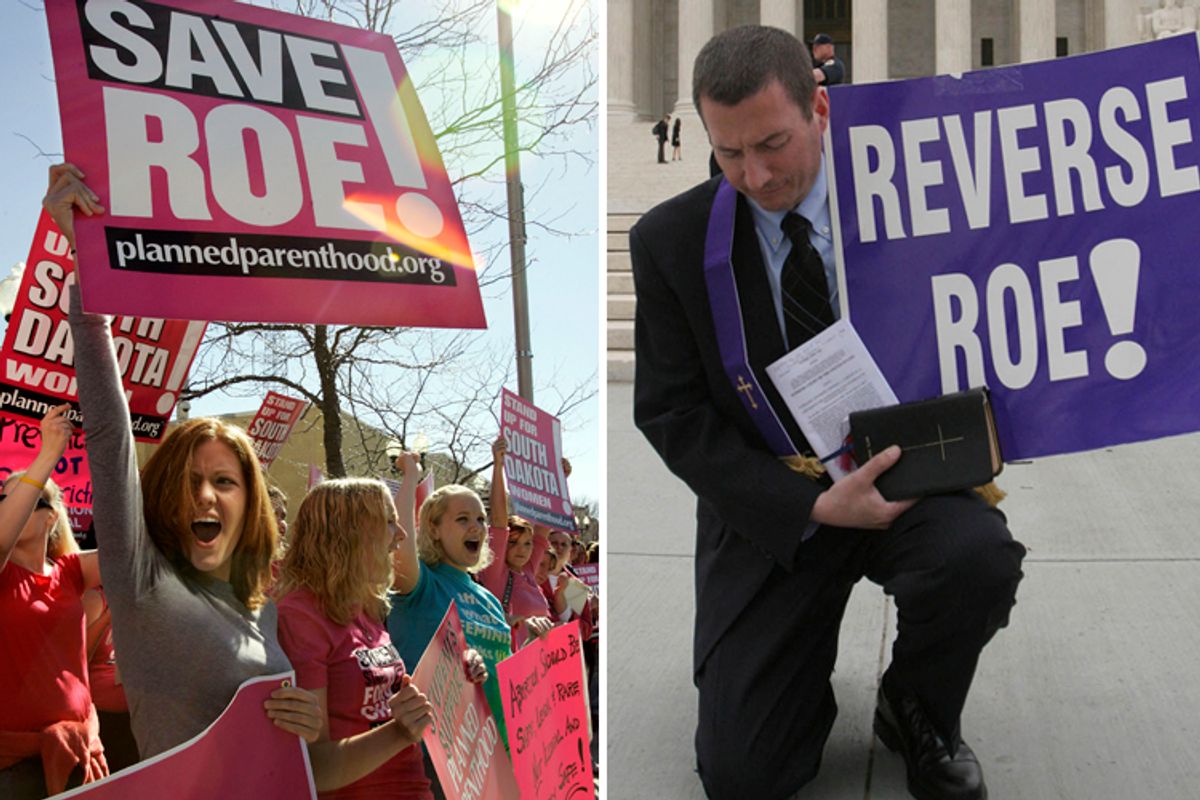 This was the year politicians and women’s groups started using “war on women” to refer to the Republican obsession with regulating uteruses. So if it’s a war, who’s winning?

The answer, frustratingly, is no one. This year saw the cementing of a consensus that neither side particularly likes: Abortion is still legal, but Republicans are doing an ever-better and more innovative job of making it as odious, expensive and shaming as possible to obtain. Although every side needs a sense of urgency to rally the troops, the good-ish news is that the federal court system helped hold back the tide on the worst laws. And for better or worse, anti-choicers got more honest than they’ve ever been about their hostility to birth control, which is used and supported by the vast majority of Americans.

Broadly speaking, the first half of the year saw Republicans in statehouses passing ever more outrageous laws -- 80 in all this year, more than double the previous record -- followed by a series of judges rolling their eyes and sending them home mostly empty-handed, for now at least.

Along the way, the pro-choice movement has made some unlikely allies. A quiz: Who recently suggested that the “Texas legislature wishes to prioritize an ideological agenda over the health and safety of women”? Judge Sam Sparks, a George H.W. Bush appointee, temporarily striking down a law that would have forced women to view ultrasounds and hear a fetal heartbeat before an abortion. Who, ruling on Nebraska’s so-called informed consent law that opened the door for suing doctors simply on the basis of a woman’s regret, scoffed that consequences and remorse are “part of the price we pay for our freedom. (Only Edith Piaf was without regret.)”? That would be Laurie Smith Camp, appointed to the federal bench by George W. Bush.

Meanwhile, a Clinton-appointed judge enjoined a particularly audacious new South Dakota law that would have imposed the longest waiting period in the country and forced women to visit religious-based crisis pregnancy centers whose explicit aim is to talk them out of an abortion. Judge Karen Schreier wrote that the last provision “humiliates and degrades [a woman] as a human being.” In those cases, both Nebraska and South Dakota, in apparent realizations that they overreached, won’t appeal.

“Judges know the score,” says Linda Greenhouse, who since retiring from the New York Times has co-edited a book and several legal articles focusing on reproductive rights. “They know that there’s a movement out there that’s going to push and push and push, which the political system in some of these states seem powerless to stop. These enactments have certainly gone beyond anything the Supreme Court has permitted.”

What the Supreme Court has permitted is not, in fact, what’s laid down in Roe. Instead, women are living under the “undue burden” standard of Planned Parenthood v. Casey, which turns 20 next year.  To put it bluntly, you’re allowed to burden a woman seeking an abortion, but only so much. Nancy Northrup, president of the Center for Reproductive Rights, says of Casey, “I think 20 years have shown that  is unworkable. What does it mean that you have a fundamental right to access abortion services but the government can make it really hard to do so?”

But given the court’s current composition, that’s the best pro-choicers have implicitly decided they can hope for – Casey’s author, Sandra Day O’Connor, has been replaced by Samuel Alito, and the last time co-author Anthony Kennedy ruled on abortion, in 2007, he sounded distinctly sympathetic to unscientific anti-choice claims. “While we find no reliable data to measure the phenomenon, it seems unexceptionable to conclude some women come to regret their choice to abort the infant life they once created and sustained,” he wrote. (Lack of reliable data has never stopped the anti-choice side before – the attorney general of South Dakota is still demanding a rehearing from the circuit court on an earlier law forcing doctors to push a phony link between abortion and suicide.)

There is also no reliable data to back the “fetal pain” rationale behind laws banning later abortions in six states, and pro-choicers have evidently decided not to push their luck with Kennedy by challenging them. Or, as Scott Lemieux, a legal scholar and blogger, puts it, “The fetal pain thing is complete bullshit, but Kennedy has already proven that he doesn’t care what the evidence is.”

In most of those states, there isn’t even a provider who performs later abortions, making the point academic. But there is at least one, Dr. LeRoy Carhart, whose name is on the last two Supreme Court decisions on abortion – including the court’s upholding of a later abortion procedure with no health-of-the-mother exception. But instead of going to court in his home state of Nebraska, which passed such a ban explicitly to prevent him from taking on the practice of his murdered friend Dr. George Tiller, he’s started commuting to a clinic he opened in Maryland. “Nothing is off the table,” he told me, but given the specificities of the case and the court’s current composition, there are no plans to challenge the laws.

Implicitly, the legal arm of the movement has decided that the status quo is the lesser evil. Rachel Maddow and Dahlia Lithwick suggested earlier this year that this was cowardly capitulation; Lithwick wrote scathingly that if Republicans kept exploiting that reluctance with ever-bolder restrictions in receptive states, “The end result is that Roe remains on the books, while for all practical purposes women can't get an abortion in Ohio, North Dakota or Florida. I suppose you can call it half a loaf, but then, having half a loaf only really works if you are sort of pregnant.” But if a challenge backfires, it could make it even harder for Carhart to take on those difficult cases while driving unpopular, little-understood later abortions back into the spotlight. (Ironically, it’s the incremental regulations that the courts have allowed, including parental notification laws, waiting periods and public funding bans, that have contributed to at least some of those later abortions, by making earlier ones harder to access.)

"I don't think we're rolling over and playing dead," Carhart says. "It's just that we need to go with a slam-dunk winner."

And if anti-choicers are paying attention, they aren’t going to push outright bans anyway, especially not after 58 percent of the electorate in deep-red Mississippi rejected a Personhood amendment that had the support of the state's political establishment. Personhood, with its no-exceptions abortion ban and at least the intent to ban popular forms of birth control and reproductive technology, proved to be the suicide death cult of the movement, validating the incremental anti-choice strategy of just chipping away at access. As Greenhouse (who calls Personhood “take your fertilized egg to the prom”) notes, “If you were on that side of the street, Mississippi would be a wakeup call to reconsider your strategy.” The fact that the country in general still wants abortion to be legal won’t be lost on the justices either.

In other words, it’s not capitulation to push back at the restrictions that affect the most women and show the anti-choice movement's opposition to any type of family planning – especially because so far the strategy’s working.

But hold off on the wild celebration of the lower courts (or Republican-appointed judges) as a bulwark of choice anyway. For one thing, it depends on federal judicial nominations, which under Obama have either been slow to come or blocked by the Senate, or both. And as Jennifer Dalven, director of the ACLU’s  Reproductive Freedom Project, points out, some of those wins weren’t even explicitly pro-choice. “A good number of the state laws have been blocked because a court found that they violated a right other than the right to reproductive choice,” she says, such as the forced ultrasound laws in Texas and North Carolina being blocked on First Amendment grounds. (Still, that might be a winning strategy before Kennedy).

And for the broader movement, says Reproductive Health Reality Check editor in chief Jodi Jacobson, “legal approaches are fundamentally necessary but they’re insufficient.” On the federal level, a Democratic Senate and the threat of a presidential veto have so far held back the wild anti-choice posturing of the House (including some Democrats), but next year, of course, is an election year.

In all of this, pro-choicers are still putting out fires. According to Guttmacher, that’s never been more true: “Legislators are proposing little in the way of proactive initiatives aimed at expanding access to reproductive health-related services; this stands in sharp contrast to recent years,” adding, “For the moment, at least, supporters of reproductive health and rights are almost uniformly playing defense at the state level.” (There was one major victory nationally, when copay-free contraception was adopted as part of the Affordable Care Act provisions, which also happened to be another moment where “pro-lifers” in office showed their disgust for birth control.)

So 2011 was a year when the consensus held: You can get an abortion, but depending on which state you live in, anti-choicers are still going to make you suffer as much as possible for it and make it as hard as possible to pay for with even private insurance. (And plenty of Democrats in Congress continue to tout the Hyde Amendment, which prevents federal funding for abortion in almost every case, as a form of ass-covering in the culture wars). That consensus combined with the state of the economy has meant terrible things for the most vulnerable women. According to recent data, unintended pregnancies continue to drop among wealthier women, but in recent years they’ve skyrocketed among poorer ones, along with, unsurprisingly, the abortion rate, which is declining generally but rising among poor women since 2000. The courts may be the most visible battle, but those disparities make up the war.