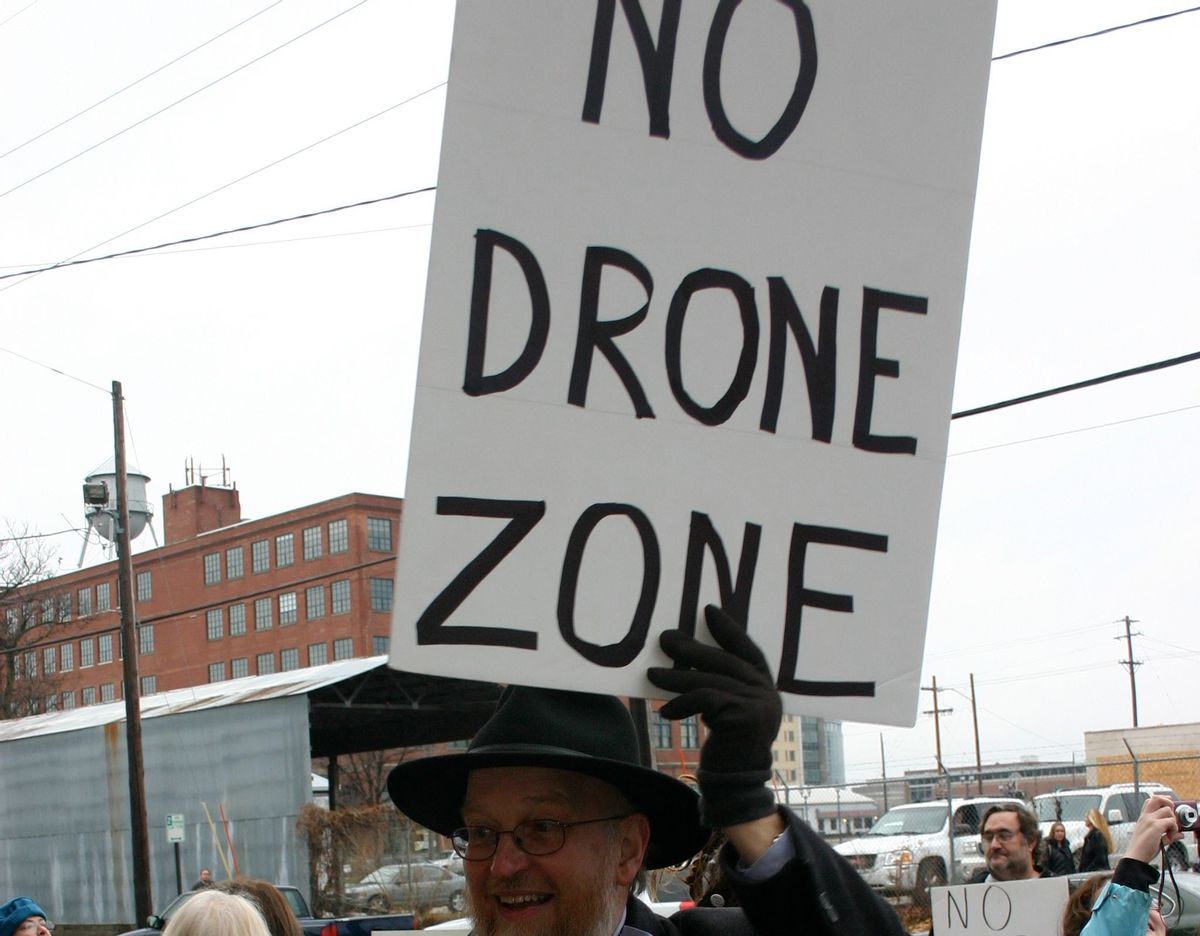 CEDAR RAPIDS, Iowa — The Cherry Building in Cedar Rapids’ revitalized New Bohemia neighborhood is a hive of artisans, small businesspeople, entrepreneurs — and soon, space for the assembly of surveillance drones.

It’s the arrival of the latter in the form of AirCover Integrated Solutions Corp. — a Northern California-founded firm— that attracted about 75 protesters Saturday afternoon from Occupy Wall Street movements across Iowa including Cedar Rapids, Des Moines, Iowa City, Dubuque and Davenport. The use of U.S.-government drone aircraft to wage war on suspected terrorists and innocent civilians from Pakistan to Gaza has become controversial as civilian deaths have mounted and civil liberties concerns have grown.

The protest lasted about an hour with the only significant verbal confrontations coming between activists and merchants in the 104,000-square-foot building  who were upset that the protest coincided with — and disrupted -- the annual Very Cherry Holiday Open House.

The Occupy argument: The drones, to be assembled by AirCover, will enable Big Brother to hover over the streets and homes of America, and serve as the handmaidens of death on foreign soil.

James Hill, president of AirCover Solutions, rejected the protesters' message. In an  interview with Salon, Hill insisted that the unmanned drones, soon to be assembled in Iowa, will save the lives of soldiers, police and rescue personnel who can use his company’s devices to enter danger zones remotely without risk of bodily injury.

What’s more, business leaders in Cedar Rapids are eager for the up to 25 tech jobs that Hill says AirCover will bring to this city of 126,000 people. Iowa’s second-largest city is still suffering from the effects of devastating floods in 2008.

The protesters gathered just after 3 p.m. outside the Cherry Building, carrying signs that said, among other things, “Are you listening?” “I want my right to privacy” and “Stop the police state now.”

“It concerns me a whole lot the kind of money that we spend on these kind of military, police state items when we don’t have enough money for our schools — enough money for health,” said Dr. Maureen McCue, who teaches in the public health department at the University of Iowa.

McCue, an Occupy supporter, said the potential abuse of the drone technology is greater than the likelihood it will be trained to peaceful, positive ends.

“These drone issues are completely buried if people don’t make a lot of noise about it,” McCue said.

Another protestor, Dr. Robert Schultes, a doctor in Cedar Rapids, held a sign that said “No Drone Zone.”

He doesn’t trust the remote-control aspect of the drones.

“If they make a mistake they kill a whole bunch of people,” Schultes said.

Hill, a former active-duty Naval reservist, said his company is led by veterans who are inspired by more than profit. His motivation, he said, is to save lives. “How do I keep this guy alive so when you see the crosses in military cemeteries they say, ‘lived a long life,’ not ‘killed in action,’” Hill said.

Hill dismissed the privacy arguments of the protesters as being out of touch with modern-day life. “Helicopters are already looking down," he said. "Everyone’s walking around with a cellphone and a camera anyway.”

Hill said AirCover would begin drone production in Cedar Rapids in early January and plans to expand, possibly elsewhere in Iowa. “We’re about job creation and jobs that are going to be right here,” Hill said.

He added, “Final assembly is to take place in Iowa and the preferred location is the Cherry Building.”

AirCover Solutions has been awarded a $175,000 grant from the Iowa Department of Economic Development. Hill said he company planned to build hundreds of the drones annually in Iowa. The drones weigh less than 5 pounds and cannot fly higher than 400 feet. Hill emphasized the potential of the drones for search-and-rescue operations, and said they are not weaponized.

David Chadima, whose family has owned the Cherry Building for 35 years, said there are about 40 small businesses on the premises, including artist studios, graphic art studios, photographers and light manufacturers.

While Chadima said he respects the Occupy movement’s right to express views, he also said AirCover's arrival is good news for the city.

“We’re thrilled that they’re going to be here,” Chadima said. “I think there’s been a lot of misrepresentation of what AirCover Solutions actually does. They make small, lightweight drones and they have a heat sensor and video equipment, and the intent of these drones is to help first responders survey dangerous situations.”

Steve Shriver, owner of an organic lip balm business  in the Cherry Building and  an Obama voter in 2008, said his sympathy for Occupy movement changed on Saturday. “I think that one of the problems is that the Occupy movement is very fragmented," he said. "So this is one group of people.'

Shriver described the Cherry Building as one of the best incubators for small businesses in the Midwest— and that Occupy was at the wrong place Saturday. "To try to drive business away from here is the biggest Wall Street move that you could make,” he said.

Doug Wagner, whose wife sells Christmas ornaments in the building, blamed the protesters for “sucking the air” out of holiday sales. “I think it’s loud, I think its obnoxious, I think it's bullying,” said Wagner, a Republican. “I don’t think it's protesting. I think that it’s mob-ocracy.”

Frank Cordaro, a Catholic worker from Des Moines and member of the Occupy movement, said a building full of artists is the last place that should build drones, which Cordaro called “the leading weapons system of the empire.”

“Sooner or later, these drones, this national security thing, is going to strangle everything, including the arts,” Cordaro said. He said people who don’t like the in-your-face tactics of the Occupy movement should take another look at the nation’s history.

“Americans have a hard time understanding what democracy really looks like,” Cordaro said. “It looks a lot like this. It’s more like this than it is by these corporate elites who buy our political parties, who own our government.”

Douglas Burns is a columnist for the Daily Times Herald in Carroll, Iowa.