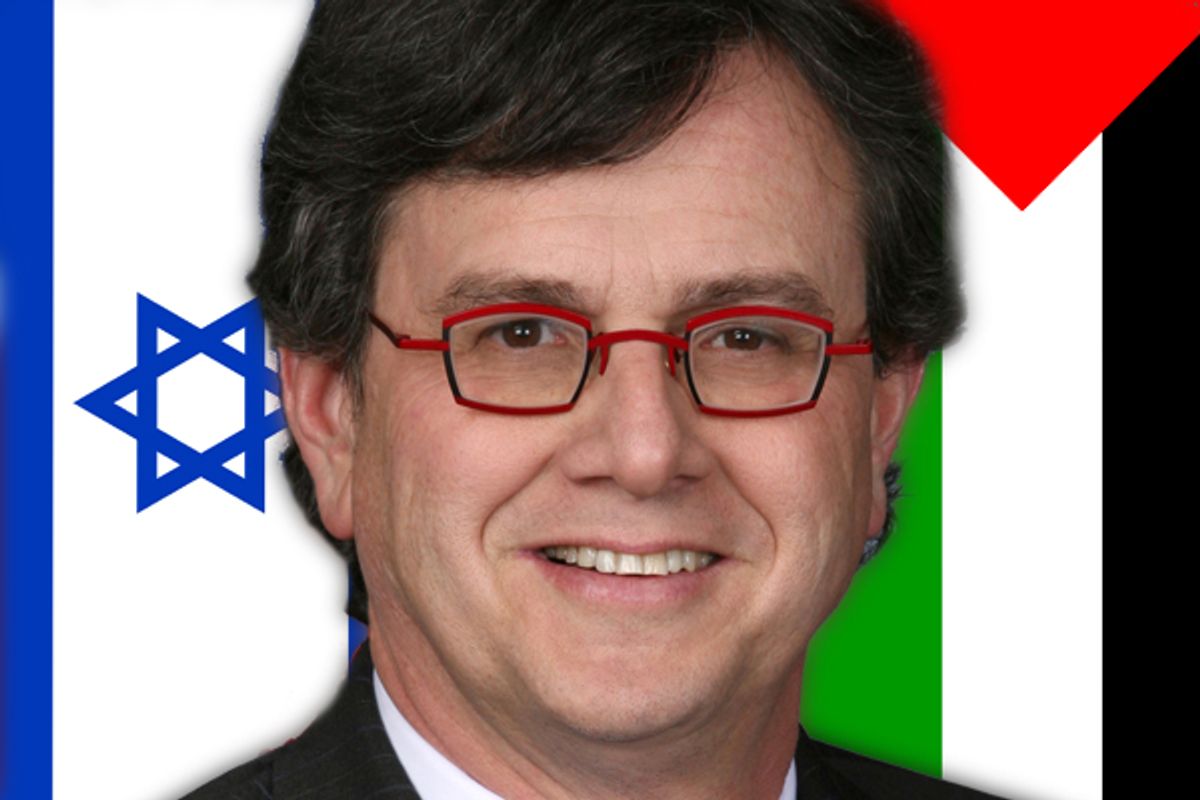 The U.S. ambassador to Belgium, Howard Gutman, is facing an intense campaign by hard-line pro-Israel voices in the U.S. who want him fired over remarks he made about anti-Semitism late last month.

Gutman, an Obama fundraiser turned ambassador, as well as a Jew and child of a Holocaust survivor, was addressing a Brussels conference devoted to combating anti-Semitism in Europe last month when he launched into a discussion of the relationship between the Israel-Palestine conflict and tensions between Muslims and Jews.

The first thing to note about the Gutman affair – which has now prompted Mitt Romney and Newt Gingrich, as well as pundits at Commentary and elsewhere to call for his firing – is that the initial reaction was based on a woefully inaccurate account of his remarks.

Gutman was paraphrased by the Israeli news outlet Ynet as saying, “A distinction should be made between traditional anti-Semitism, which should be condemned, and Muslim hatred for Jews, which stems from the ongoing conflict between Israel and the Palestinians.” The clear suggestion is that Gutman was engaging in apologetics for certain forms of Jew hatred.

The Israeli newspaper Haaretz then put that line in quotation marks even though no such words had passed Gutman’s lips.  In fact, a reading of his real remarks shows that he explicitly repudiated the idea that any anti-Semitism should be tolerated, rather than condemned.

It’s worth quoting Gutman at length. He did make a distinction between anti-Semitisms, referring to the risk of “oversimplifying and of lumping together diverse phenomena.”

He then described what might be called classical anti-Semitism:

There is and has long been some amount of anti-Semitism, of hatred and violence against Jews, from a small sector of the population who hate others who may be different or perceived to be different, largely for the sake of hating. Those anti-Semites are people who hate not only Jews, but Muslims, gays, gypsies, and likely any who can be described as minorities or different. That hatred is of course pernicious and it must be combated. We can never take our eye off it or just dismiss it as fringe elements or the work of crazy people, because we have seen in the past how it can foment and grow.

This type of anti-Semitism, he said, rears its head from time to time, but does not appear to be growing.

But there is another phenomenon, Gutman argued, that is on the rise.

It is the problem within Europe of tension, hatred and sometimes even violence between some members of Muslim communities or Arab immigrant groups and Jews. It is a tension and perhaps hatred largely born of and reflecting the tension between Israel, the Palestinian Territories and neighboring Arab states in the Middle East over the continuing Israeli-Palestinian problem.

Then – contrary to the right-wing portrayals of his remarks, such as Romney’s description of them as “rationalizing and downplaying anti-Semitism”  – Gutman explicitly called this phenomenon unacceptable:

But this second problem is in my opinion different in many respects than the classic bigotry – hatred against those who are different and against minorities generally -- the type of anti-Semitism that I discussed above. It is more complex and requiring much more thought and analysis. This second form of what is labeled “growing anti-Semitism” produces strange phenomena and results.

He then goes on to explore how this problem might be addressed, including by a resolution to the Israel-Palestine conflict.

The core point that has so many pundits on the right upset is the link between the Israel-Palestine conflict and anti-Semitism. On this, Adam Serwer at Mother Jones makes the crucial point:  “Gutman's suggestion that anti-Semitism would subside if a solution to the Israeli-Palestinian conflict could be reached isn't the same as saying Israelis or Jews are ‘responsible’ for anti-Semitism.”

As it turns out, there is rigorous research that backs up Gutman’s point — that of, in his words, “tension, hatred and sometimes even violence between some members of Muslim communities or Arab immigrant groups and Jews … largely born of and reflecting the tension between Israel, the Palestinian Territories and neighboring Arab states in the Middle East over the continuing Israeli-Palestinian problem.”

The Community Service Trust is a thoroughly mainstream British organization that specializes in the study of anti-Semitism and providing security for Jews. The group publishes an annual survey on anti-Semitic incidents in the U.K., and its most recent study (.pdf) would seem to vindicate Gutman.

It notes what happened after the IDF killed nine pro-Palestinian activists on a flotilla to break the Gaza blockade in May 2010:

The only significant trigger event in 2010 occurred when Israeli forces boarded a flotilla of ships bearing pro-Palestinian activists who were trying to break the Israeli naval blockade of Gaza; nine activists were killed during the subsequent on-board clashes. Reactions to this episode led to a monthly total of 81 antisemitic incidents in the UK in June 2010, compared to 49 in June 2009, when there was no comparable trigger event.

And it also discusses the number of anti-Semitic incidents in 2009, the year of the Israeli bombing campaign in Gaza:

The record total [of anti-Semitic incidents] in 2009 was triggered by reactions to the Gaza conflict in January of that year, which led to record numbers of incidents in January and February 2009.

Those two points show a correlation between flare-ups in the Middle East and anti-Semitism. But what about causation?

The report explores this complicated question:

Clearly, it would not be acceptable to define all anti-Israel activity as antisemitic; but it cannot be ignored that much contemporary antisemitism takes place in the context of, or is motivated by, extreme feelings over the Israel/Palestine issue. Drawing out these distinctions, and deciding on where the dividing lines lie, is one of the most difficult areas of CST’s work in recording and analysing hate crime.

This point by Community Service Trust echoes Gutman’s sentiments almost exactly. And it shows the Gutman affair is more about driving a particular narrative about tensions between the Obama administration and Israel than it is about any supposedly controversial remarks.

UPDATE 12/7/11: J.J. Goldberg at the Forward finds the IDF has expressed much the same views as Gutman. And Lara Friedman finds still more confirmation for his point from the Tel Aviv University Institute for the Study of Contemporary Antisemitism and Racism. Commentary has an opposing view here.