Did Mitt just fall into a tax cut trap? 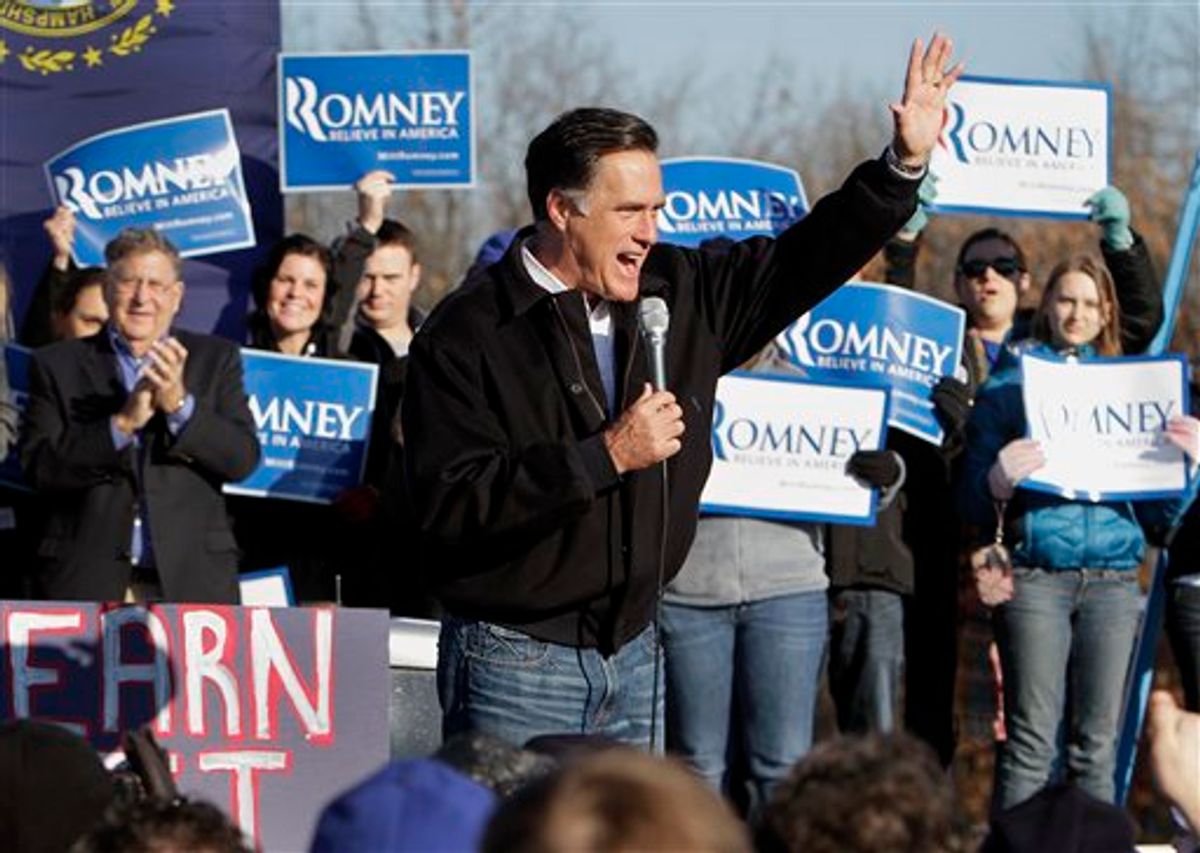 What makes the looming expiration of the payroll tax cut enacted last year so fascinating is that it's the rare major domestic economic issue of the Obama era on which Republicans are not speaking with one clear voice. To the extent a dividing line can be discerned, it's this: Those who are most concerned with how they and/or their party will fare next November seem most interested in extending the cut for another year; while those who don't have to worry as much about next November tend to be more hostile to the idea.

This helps explain why Mitt Romney, who more than any GOP White House candidate has been running with one eye on the general election, endorsed an extension in an interview with conservative radio host Michael Medved Monday evening.  "I would like to see the payroll tax cut extended because I know that working families are really feeling the pinch right now," he said. "Middle-class Americans are having a hard time."

This is consistent with Romney's recent rhetorical emphasis on middle-class tax relief, which itself seems rooted in general election thinking. It's no secret that if he's the Republican nominee, Democrats will seek to portray Romney as an out-of-touch plutocrat who's mainly interested in protecting his super-affluent friends. Given the current political climate -- thanks in part to the Occupy Wall Street movement, real attention is now being paid to income inequality and and the ways in which Washington pampers the top 1 percent -- and Romney's own corporate image, this could be a fertile line of attack. Thus, Romney has taken to stressing that "[m]y intent and my passion is not saying, 'How can I lower the burden paid by the wealthiest?' I'm not looking to do that. I'm looking to keep that the same, and instead to say, 'How can I get relief to middle-income Americans?'"

In broadly endorsing the payroll tax cut extension, Romney does have company in the GOP. Senate Minority Leader Mitch McConnell, for instance, has said he's committed to reaching an agreement with Democrats before the lower rate expires at the end of the year. Like Romney, McConnell is thinking about next November: Republicans are within striking distance of winning back the Senate, but their hopes will be severely complicated if they end up being blamed for what would amount to an average tax hike of $1,000 for millions of middle-class families.

But the Tea Party era has brought with it a host of incentives for influential Republicans to thumb their noses at general election considerations. Egged on by conservative opinion leaders, the GOP's base has been engaged in a two-front war since November 2008, one against Barack Obama and the other against compromise-friendly Republican "insiders" -- those who, in the Tea Party's view, betrayed conservatism in the aughts and enabled Obama's rise. The 2010 primary season, in which several Tea Party-aligned candidates won high-profile contests against brand-name Republicans, has made Republicans in the current Congress ultra-sensitive to the Tea Party mentality; no one wants to be the next Mike Castle or Bob Inglis.

This makes the politics of the payroll tax cut within the GOP very complicated. While coming to terms on an extension is clearly in the party's overall interests for the '12 campaign, every conceivable path to a deal could expose Republican elected officials to the "RINO" label that is so poisonous in today's GOP.

For instance, while the right has long embraced the idea of tax cutting, this particular tax cut is Obama's baby -- he insisted on it as part of a deal last December to extend the GOP's beloved Bush tax cuts for two more years -- and conservatives have had no appetite for deal-making with this president, even when he's proposed terms that are quite favorable to them. The simple act of giving Obama something he wants could provoke a serious backlash on the right.

Plus, Democrats are proposing that the payroll tax rate be lowered further in 2012 (from the current 4.2 percent to 3.1 percent) and paid for through a surcharge on incomes over $1 million. But this idea is poisonous to today's conservatives, who have come to treat "millionaires" and "job-creators" as synonymous terms and are likely to regard any such deal as a "job-killing tax hike." Who wants to defend that in a Republican primary? Nor is simply passing an extension without offsetting the cost a practical option for Republicans, even if Democrats would agree to it in a minute -- not with Rep. Paul Ryan, one of the premier Tea Party voices in today's GOP, already declaring that this would "simply exacerbate our debt problem."

This is why the GOP is not yet speaking with one voice on this issue. Party leaders on Capitol Hill and general election-minded elected officials and candidates like Romney fear that their party will pay a price at the ballot if the cuts aren't extended. But plenty of Tea Party purists don't like the idea of an extension at all, which leaves more pragmatic Republicans torn between conflicting general election and primary season imperatives.

There's a real risk here for Romney, and a potential opportunity for Gingrich, who has surged ahead of him in national and key early state polls. If the payroll tax cut extension becomes defined within the Republican universe as a battle between"pure" Tea Party types and the weak-kneed establishment, it could reinforce the GOP base's doubts about Romney at the absolute worst time for him, with the Iowa caucuses coming about 72 hours after the cuts are due to expire.

It may not come to this, of course. Romney did leave himself some wiggle room with his answer to Medved; if he decides it's vital to oppose a specific extension plan, he probably has room to do so. And Gingrich has yet to weigh in, although he did acknowledge in September that "it's very hard not to keep the payroll tax cut in this economy." But it's worth remembering that no one in modern Republican politics is quite as good at fomenting and milking an intraparty tax fight as Gingrich. A pivotal moment in his rise to power in the House came when he led a rebellion against an anti-deficit tax hike package that George H.W. Bush hashed out with bipartisan congressional leaders in 1990. If the opportunity presents itself in the next few weeks, here's betting that Gingrich will try for an encore.