Newt Gingrich will babble his way to the White House

If he can silence Glenn Beck, he can handle Barack Obama in a debate, right? 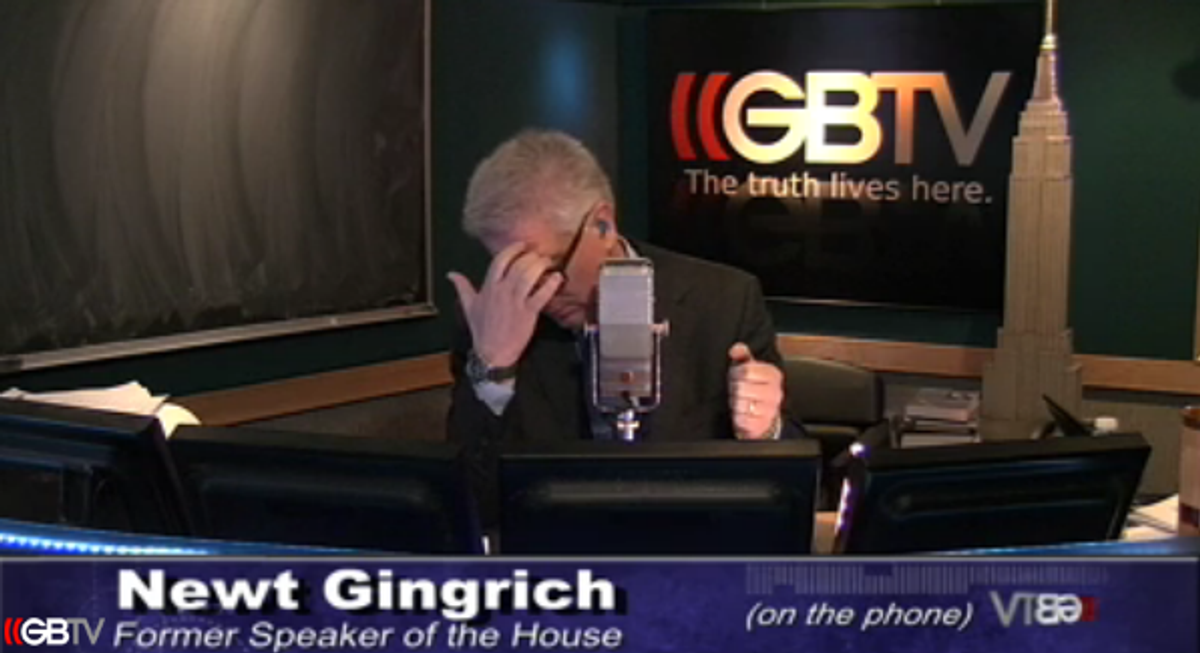 While it's easy to pick through any Newt Gingrich interview and conclude that he comes out looking silly, because he is silly, I have to agree with Dave Weigel that Gingrich handily won his encounter with streaming Internet talk show host Glenn Beck. Look at the excerpts Weigel quotes: It's typical word-salad nonsense from Gingrich, but those responses successfully cow Beck into changing the subject.

Just watch the first couple of minutes of this and watch Beck sit there, dumbstruck, as the disembodied voice of Gingrich rambles about Upton Sinclair's "The Jungle," the Wright Brothers, and Alexander Hamilton's Report on Manufactures (which Gingrich incorrectly refers to as his "First Report on Manufacturing" -- such shoddiness from Freddie Mac's historian in residence!).

This isn't just because Gingrich is smarter than Beck, though he is.

There's a reason Glenn Beck's show generally featured monologues: The guy doesn't do interviews very well. He's easily filibustered. Remember him looking completely lost and dejected while attempting to get anything worthwhile out of a babbling Eric Massa?

And Gingrich, who'd agree to sit down for a day-long "Lincoln-Douglas-style debate" with a Teddy Ruxpin doll, is selling himself as a candidate based in large part on his ability to talk. Republicans think Obama talked his way into the White House, mesmerizing voters with his fancy words and soothing tone. And certain conservatives are itching for Gingrich to face Obama in a talking contest. They think Gingrich would destroy him. And they base this impression on the sight of Gingrich dominating interviews with morons like Glenn Beck.

What Newt is good at -- and it's the exact thing Romney is awful at -- is defending himself against charges of apostasy. Gingrich has been all over the political spectrum during his career, but when you try to nail him on some sort of offense against conservative orthodoxy, he talks his way out of it. Glenn Beck says Gingrich compared himself to Teddy Roosevelt, lately a "Progressive" villain. Gingrich responds with a history lesson and a defense of very basic public safety regulations that no one would argue with. Beck criticizes Gingrich's support for ethanol subsidies, Gingrich responds with crowd-pleasing nationalism about competitiveness with Saudi Arabia and Venezuela and a bit of Obama-bashing.

When directly confronted with his attack on Paul Ryan's Medicare plan, an attack that almost ended his campaign before it began, Gingrich defended himself by saying that he was right and also he'd vote for Ryan's plan.

GINGRICH: Well, let’s go back to what I just said. What I was asked was if a program is unpopular, should the Republicans impose it anyway. We can go back and we can listen to exactly what I was asked on that show and what I said I stand by, which is in a free society, you don’t elect officials to impose on you things that you disagree with. We just went through this slide over ObamaCare.

Now, I also, ironically, I would implement the Medicare reforms that Paul Ryan wants, I would implement them next year as an optional choice and I would allow people to have the option to choose premium support and then have freedom to negotiate with their doctor or their hospital in a way that would increase their ability to manage costs without being involved, you know ‑‑ but I wouldn’t impose it on everybody across the board. I think that’s a very large scale experiment. But I think you could migrate people toward it. I’m proposing the same thing on Social Security. I think young people ought to have the right to choose a personal Social Security insurance savings account plan and the Social Security actuary estimates that 95% of young people would pick a personal Social Security savings account over the current system but they would do so voluntarily because we would empower them to make a choice. We wouldn’t impose it on them. That’s a question of how do you think you can get this country to move more rapidly toward reform, and I think you can get it to move toward reform faster.

GINGRICH: By giving people the right to choose.

Gingrich even successfully spins his longtime vocal support of government action to reverse climate change by saying he was talking about tax credits for nuclear power and besides he never liked Al Gore and thought cap-and-trade was an attempt to establish government control over the private sector.

A Gingrich-Obama debate would certainly be more fun than a Romney-Obama debate, but I can't imagine it'd be as easy for Gingrich as outwitting Sean Hannity and Greta Van Susteren.