Rove v. Trump: the unlikely war for soul of GOP 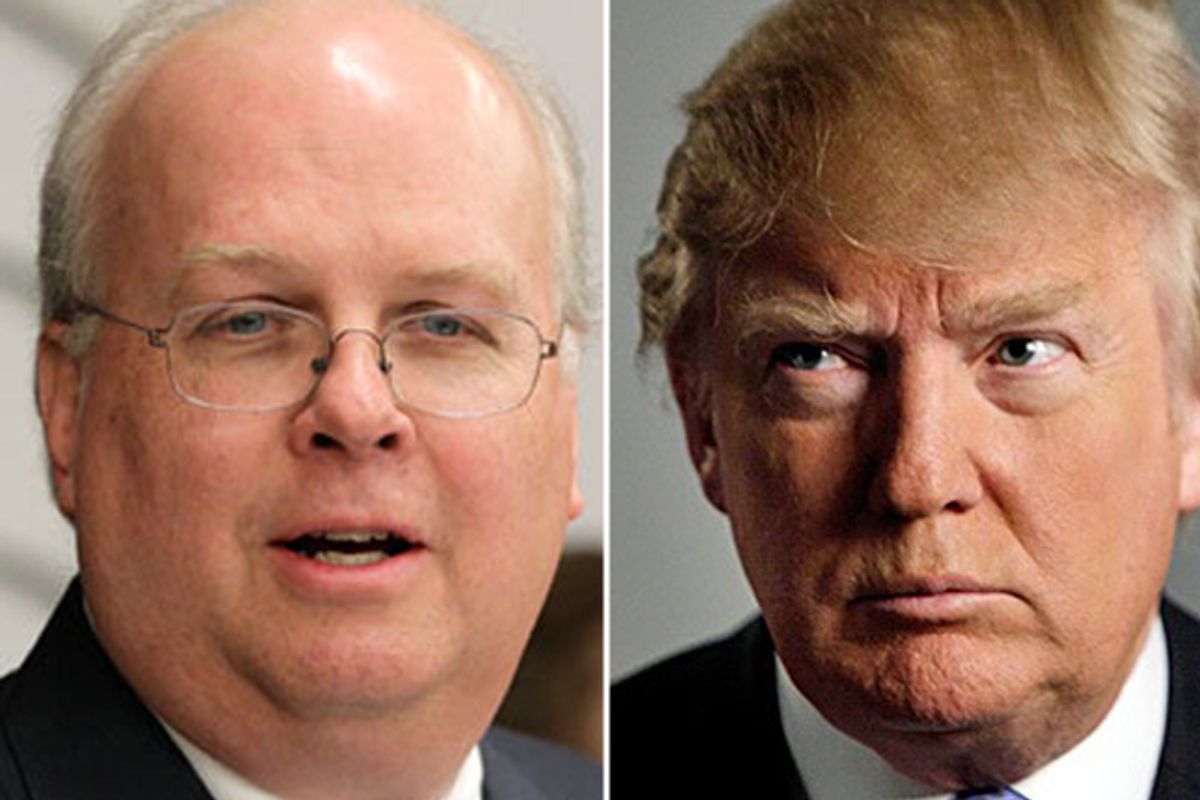 Newsmax, a nutritional supplement sales organization and expensive email list with a right-wing news website attached, is hosting a Republican presidential debate, "moderated" by fictional television clown tycoon Donald Trump, set to air on a television channel you probably don't actually know you have that spends most of the broadcast day airing paid programming. Historical fiction author Newt Gingrich -- a disgraced serial adulterer with a still-unexplained $500,000 credit line at Tiffany and Co. who is also for some reason the current frontrunner for the party's nomination -- could not be happier. For some crazy reason, Republican campaign strategist Karl Rove is not particularly thrilled with all of this.

Rove, see, is operating from the outmoded idea that the Republican party should attempt to appeal to anyone not currently already old, angry, and skeptical of the president's citizenship. From Karl Rove's perspective, a man universally regarded as an unserious ass should not be hosting a major party's presidential candidates and then selecting one of them, reality show-style, as his endorsee, live on television. For Rove, the fact that polls show associating with Trump is a net negative even among GOP voters is worrying, and not, as it is for the rest of us, hilarious.

On Fox yesterday, Rove encouraged the RNC to step in and fix this, which is unlikely to happen, because what power does the RNC have over any of these clowns?

"More importantly, what the heck are the Republican candidates doing showing up at a debate [whose moderator] says, 'I may run for president next year as an Independent'? I think the Republican National [Committee] chairman [Reince Priebus] should step in and say, 'We strongly discourage every candidate from appearing in a debate moderated by somebody who's gonna run for president,' " he said.

Hah, so Trump is unacceptable because... he might pretend to run for president again, and not because he's an idiotic unrepentant birther who constantly uses barely veiled racist tropes to criticize the president. Just checking!

Though the day Karl Rove objects to a Republican candidate for attempting to drum up support with bigoted dog-whistles is the day Rove accuses someone else of being incapable of feeling shame.

The point is that while everyone else is out, in glorious free market fashion, solely to make a buck (Trump has a book out! Newt has eight books out!), Rove is interested in the state of the party, and he would like to perhaps help the party to win some elections next year. The problem for him, right now, is that the actual people in his party seem to strongly prefer charlatans to proper candidates. Poor Karl Rove! The permanent Republican majority is basically becoming an angry elderly minority, convinced that it represents 100 percent of the only America that should count. (Which is not to say that this angry minority doesn't have a good shot at taking both houses of Congress and the White House next year, so Rove should relax and continue raising hundreds of millions of dollars in anonymous money.)