Sometimes a purse is just a purse

Try telling that to TSA. And introducing the American Hysteria Hall of Shame 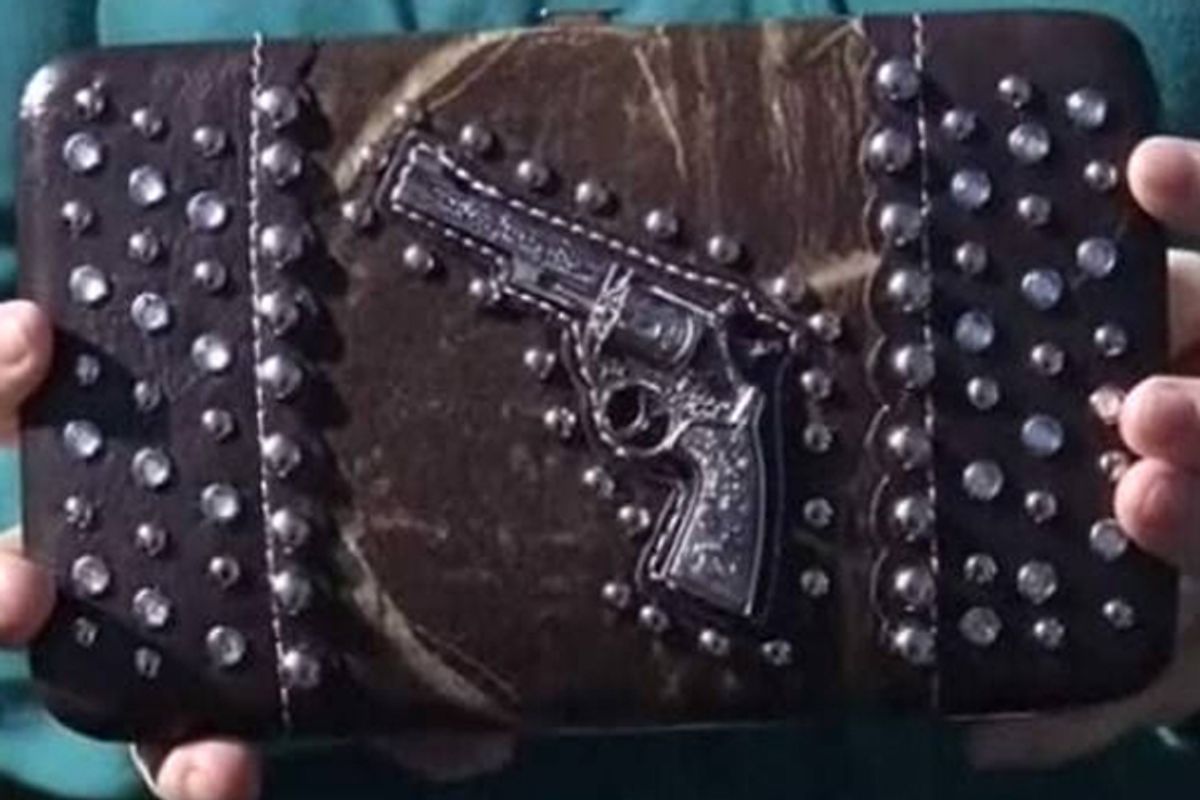 That's the thing with airport security and TSA. There is always something funny to write about.

And in place of "something funny" you may substitute the words "exasperating" or "troubling" or "a national embarrassment."

The latest from the Department of You Can't Make This Up involves a teenage girl who was not allowed to carry a purse onto a flight in Norfolk, Va., because it was embroidered with the design of a handgun.

That's right, embroidered. According to reports, 17-year-old Virginia Gibbs was told by Transportation Security Administration that bringing such a purse through the checkpoint constitutes a federal offense. She was given the option of giving up the purse or sending it along as checked luggage.

TSA says the problem is that such designs can be mistaken by scanners for the real thing, resulting in checkpoint closures and delays. On the one hand that is not unreasonable (though it does make us think that if you can't tell the difference between a purse and a gun, how good is this technology at identifying explosives?). On the other, more logical hand, once they saw and realized it was a purse, what would the harm have been in giving it back to the girl and letting her through? If there was going to be a closure or a delay, it already happened. Confiscating the bag no longer served a purpose.

A ban on replica weapons makes sense. We get it. But this wasn't a replica weapon. It was a purse. There is nothing remotely dangerous about what is essentially a drawing of a firearm, and TSA should not be able to deny the carriage of harmless private property.

Meanwhile, what bothers me about the CNN.com story is that it implies this is all OK. "Flying fashionistas with a thing for the Second Amendment," it begins, "may want to leave their gun-themed purses and other paraphernalia at home, lest they be flagged as a security risk and miss their flights." Rather than worrying about the Second Amendment, where is the more urgent concern over security run amok? And things like this aren't just silly or intrusive. They waste time, they waste money and they draw valuable security resources away from more useful deployment. In other words, they're making us less safe, not more safe.

I think the time has come to put together what I'm calling the American Hysteria Hall of Shame, a compilation of our more ludicrous overreactions since the terror attacks of 2001. It's hard to say which incident belongs at the top. Up there with Danger Purse is the story of the pilot and the butter knife, and the one about the 57-year-old man who accidentally walked through an emergency exit door at Kennedy Airport, causing the entire terminal to be evacuated and getting himself arrested.

And let's not forget my personal favorite, Operation Barf Bag: In 2004, on board a United Airlines 747 flying from Sydney to Los Angeles, a discarded airsickness bag was found in a lavatory with the letters "BOB" scrawled across it. For reasons that defy explanation, somebody decided that the letters stood for "Bomb On Board," and the plane went all the way back to Sydney for a precautionary landing, jettisoning thousands of gallons of fuel in the process. Never mind that there was no precedent to suspect "BOB" referred to anything aside from a person's name; we were asked to believe that terrorists would actually advertise the imminent detonation of an explosive device by means of a cryptic acronym scrawled on a barf bag.

Our Hall of Shame needs a logo too. I'm imagining an intoxicated eagle clutching a shredded Bill of Rights -- half in its beak, the other half in its talons -- above some frightened-looking Americans draped with a flag. At the bottom it should have some words -- a motto. How do you say, "The Terrorists Have Won" in Latin?

Thanks for bearing with me through last week's Hüsker Dü column. Most of the feedback I received was positive.

To those of you who complained and who don't enjoy my music diversions, stop provoking me or you're going to get more of them. How would you like a five-screen story on the Jazz Butcher Conspiracy, or an article called "Fifty Reasons Why Billy Bragg Was Better Than Bob Dylan." Don't make me do it!

And one small sequel to the whole Hüsker Dü thing, which I meant to include with last week's column. It's a contest, actually.

Here's the question: The liner notes to the "Zen Arcade" album contain a mistake. What is it?

The first emailer with the correct answer gets his or her choice of an Ask the Pilot baseball cap (autographed under the brim, MLB player-style), or one of my few remaining ATP T-shirts (so long as you can fit into a size small or medium, since that's all I've got left).