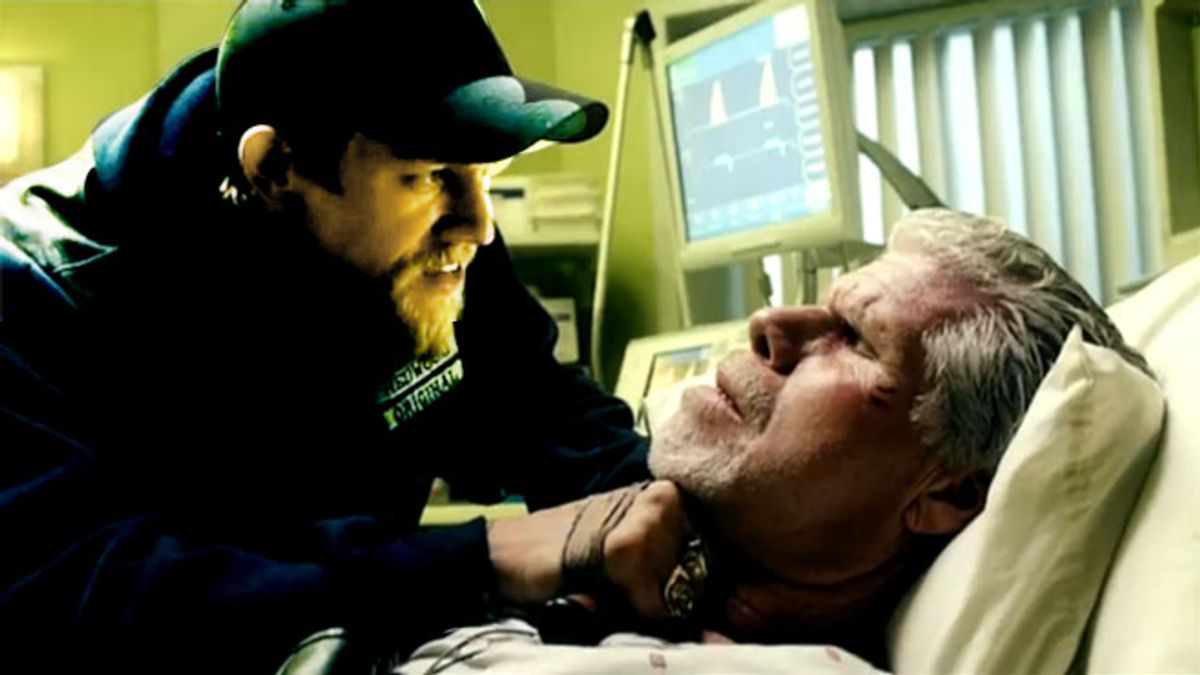 My old friend David Dixon coined a phrase that popped into my head several times during the fourth-season finale of "Sons of Anarchy" -- maximum ludicrosity. It means just what you think it means: an already ludicrous story piles on twists so blazingly nutty that it hits a giddy new peak and becomes, in its way, sublime. This episode, which was written by series creator Kurt Sutter and Chris Collins and directed by Sutter, hit that point the second that the combined federal-local bust of the Sons of Anarchy, the Irish Kings and the Gallindo Cartel was preceded by two supposed members of the latter clan flashing CIA badges at assistant U.S. District Attorney Lincoln Potter. At first I thought it was a scam and wondered why Linc didn't tell them to take their thumbs off the ID photos on those "real" badges. But no: It turns out they were spooks all along!

On the plus side, you can't say that Sutter didn't pave the way for this. Romero "Romeo" Parada seemed awfully black ops for a biker, a soldier in more than the metaphoric sense -- and a reader points out that they were in the Mexican Army before joining the cartel. He and his colleagues often seemed to possess knowledge, even foreknowledge, of key events that felt a tad Tom Clancy-ish. But on the minus side, well, this was just wild. They might as well have gone all the way and had Danny Trejo peel back the skin of his forearm to expose circuitry and tell Linc, in an Austrian accent, "Now listen to me very carefully ..."

It was ultimately no sillier, though, than anything else on "Sons of Anarchy," a testosterone-addled soap-opera fairy tale that also happens to be one of TV's most consistently well-constructed, confident, entertaining shows. Juice getting handed the jacket with the racially incriminating info and being told he could tear it up himself; Linc righting the cosmic scales after the bust's collapse by dumping that box-load of sex toys at the city council meeting to keep the mayor and chief developer from suburbanizing Charming; almost all the stuff related to the Irish Kings, the Sons and the Cartel: The show was a deus ex machina jamboree.

The twists all worked, I think, because their goal wasn't to neutralize existing season-four plot developments, but kick things up a notch and pave the way for Season 5, which looks as though it's going to find all these characters bound together even more tightly than they were before: cops and criminals, bikers and biker mamas, combatants and civilians, middle-aged parents and the adult children who are finally pushing them aside and seizing power. The universe has been reconfigured. Juice no longer has the threat of government blackmail hanging over his head, but he owes Linc and the sheriff a huge favor. The mayor and the business community now have reason to actively despise Linc. Jax is running things now, but Clay still has a vote. Given the rampant sewing-circle bitchery that defined Season 4 of "Sons," I can't imagine that the new power dynamics will go down entirely smoothly, and that the club's veteran members won't resent being marginalized as "elder statesmen."

And although your mileage will surely vary, I like that they're keeping Clay around at the behest of the CIA, to ensure that the deal with the Irish Kings goes through. This is much less cliched than the standard "You killed my dad and now I will avenge him!" scenario. It also fits with the "keep your friends close and your enemies closer" ethos, and it gives Jax no choice but to accept his destiny and become the biker version of Michael Corleone or Hamlet, assuming control of a troubled kingdom that he was always fated to run anyway. (The title of this season-closing two-parter was "To Be.") Keeping Clay alive also forces Tara, whose surgery career was ended by Parada's (CIA?) goons anyway, a compelling reason to embrace her own dark destiny. They're the club's new power couple, usurping Clay and Gemma -- and neither Clay nor Gemma will be too happy about that, I'm sure. (A side note: There was something oddly intimate and personal about the scene with Jax sitting by his father's grave and putting those rings on his hand. It occurred to me that this was the episode in which Sutter, who learned his craft as a writer-producer on FX's "The Shield," made the transition from upstart show runner to elder statesman, and I laughed out loud at that shot of "The Shield" playing on the TV in Juice's jail cell. Way to make it official, Sutter.)

The final 10 minutes of the episode -- an almost wordless series of slow zooms set to a customized version of "House of the Rising Sun," leading to Jax's first use of the gavel -- were damn near perfect, oddly combining a parable/horror movie sensibility and a voluptuously mournful Sergio Leone sense of rhythm. (The episode could have been called "Once Upon a Time in Charming.") The climax also drove home -- as if we need any reminders by this point -- precisely what sort of show we're watching. In a sense, the central locale of Charming, Calif., is not unlike the Harlan, Ky., of FX's more laid-back "Justified" or the neo-noir Los Angeles of "The Shield" or -- for that matter -- the island on "Gilligan's Island," or Leone's version of the 19th century West. It's several degrees removed from recognizable reality. It's set in a mostly metaphoric space. What's plausible is whatever feels right -- and most of the twists in last night's episode felt right to me. A couple of months ago, I was joking that with this season's emphasis on succession -- and characters getting forcibly cast in social roles they didn't want but couldn't escape from -- "Sons of Anarchy" was starting to remind me of that final reveal in "The Shining," which suggested that the most recent caretaker of the Hotel Overlook had not just reenacted the fate of his predecessor, but in some sense truly was that guy. Viewers might have gotten this without Sutter superimposing the now-iconic black-and-white photo of Jax's mom and dad over the shot of the newly ascended Jax and his now-committed-to-the-lifestyle wife, Tara, but no matter. On "Sons of Anarchy," "on the nose" is often exactly right.