Charlize Theron and Patton Oswalt are terrific, but the forced, weird \"Young Adult\" is painful in the wrong way 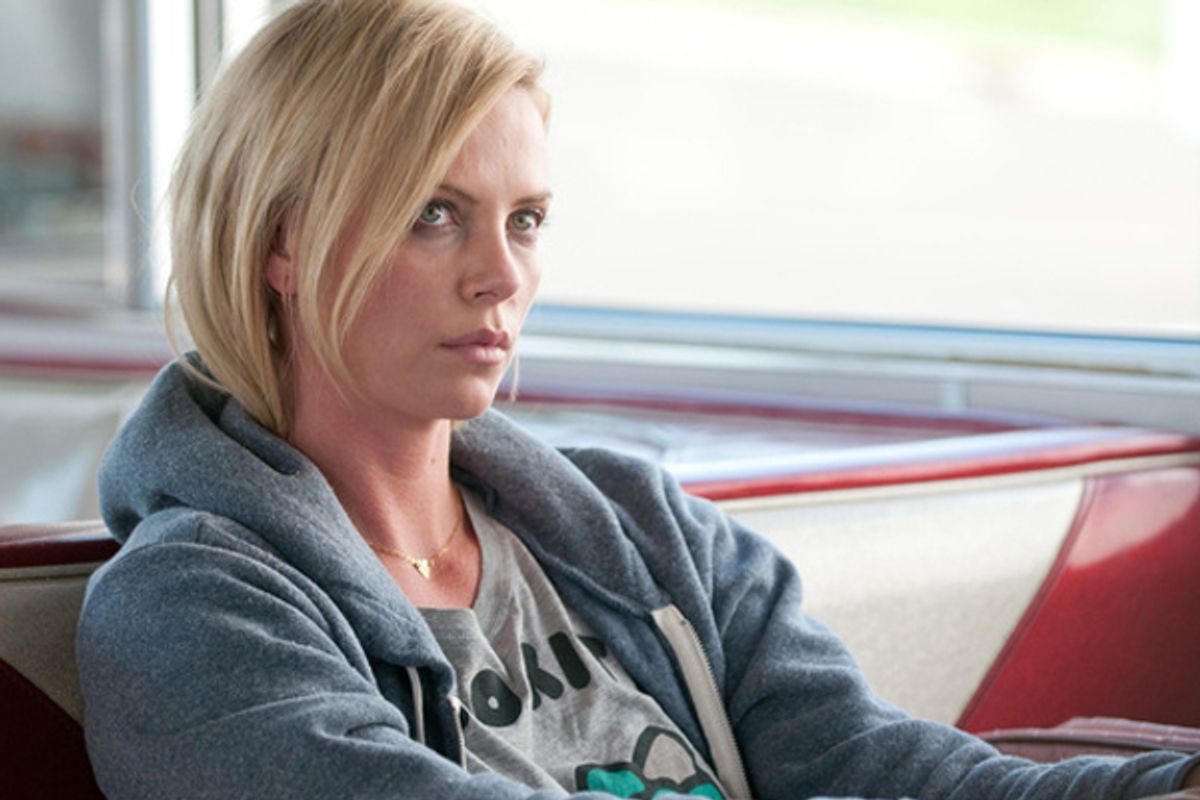 Screenwriting is one of those things nobody really understands, and I have long suspected that those who actually do it don't understand it much better than the ordinary moviegoer. It was two-time Oscar-winning writer William Goldman, after all, who once supplied the supreme nugget of Hollywood wisdom: "Nobody knows anything."

Robert McKee's lectures and seminars on story structure have made him rich, to cite the most obvious example -- but McKee himself has never written a credited screenplay for a feature film, and by his own admission is handing down elemental Aristotelian wisdom about narrative that was commonplace in the early days of Hollywood. His claim to have instructed at least 36 Oscar winners and 160-odd Emmy winners leads to a tautological retort: Since virtually every aspiring screenwriter has taken his course or read his books, that's not such an impressive ratio. Personally, I suspect that imbibing cocktails at the Beverly Hills Hotel's poolside bar leads to winning an Oscar -- I mean, the correlation is amazing! (Bonus essay question: Is McKee's real pop-culture legacy his formulaic approach to screenplay, or his appearance as a character played by Brian Cox in "Adaptation," itself the career apogee of the ultimate anti-McKee screenwriter, Charlie Kaufman?)

A good screenplay, it seems to me, is a mysterious, alchemical combination of ingredients both familiar and unfamiliar. There are almost no general rules about screenplays that apply across the board, no matter what McKee or anyone else tells you. But if we're talking about American movies aimed at a more or less mainstream audience, they almost always involve the application of a highly idiosyncratic voice to a formulaic structure. That exact combination is what elevated Diablo Cody to celebrity status with her screenplay for "Juno" in 2007, along with the fact -- let's check reality here, people -- that she was an attractive and funny ex-stripper female-type person in a field dominated by ugly, hairy guys.

I didn't love "Juno," overall, but it was definitely crisp, humorous, unusual writing. What has happened to Cody since then is exactly what happens to every innovative screenwriter in the entertainment biz. She became a brand name and something close to a star in her own right, someone who will get multiple chances to succeed or fail, whether she writes crap or "Great Expectations." And she already stands out a whole lot less than she did at first, because any number of other writers have figured out what she's doing and sought to imitate it, to greater or lesser effect.

While Cody was writing the Megan Fox megaflop "Jennifer's Body" -- not as bad as its reputation, perhaps, but that's not much of an endorsement -- and crafting the TV series "United States of Tara," other writers have been cranking out Cody-like scripts loaded with self-aware, overly verbose characters and post-Tarantino cultural shtick. She didn't write "Horrible Bosses" or "The Change-Up" or "Crazy, Stupid, Love." or "Going the Distance" or countless other bromancey, rom-commy movies of the 2008-11 epoch, but she might as well have. The Diablo virus has infected pretty much all of Hollywood comedy, both in its XX and XY-chromosome varieties. I was about to say that Cody's lone distinguishing characteristic at this point is the fact that she's a woman writing mercilessly about female characters, but then I got a telegram from Kristen Wiig and Annie Mumolo over at the "Bridesmaids II" production office. (And I have to say it smelled kind of gross.)

That brings us to "Young Adult," which stars Charlize Theron as a memorably mean and bitter character -- as it happens, a frustrated, drunken and slutty writer whose fame is not nearly what she wishes it were -- and reunites Cody with "Juno" director Jason Reitman, presumably in hopes of rekindling their 2007 magic. And here's the thing: If you didn't know, going in, that this was a Diablo Cody movie and hence was supposed to possess an extra frisson of wit or daring or edge or whatever, I don't think it would ever strike you that way. Humor is notoriously subjective, of course, but I didn't find "Young Adult" especially funny. It's an intermittently engaging fable of American homecoming that's both intentionally and unintentionally awkward, and flavored from bitter to sour all the way through.

Theron is terrific, exuding a powerful, black-hole sexual chemistry as the boozy, unprincipled and profoundly unhappy Mavis Gary, who has apparently graduated from being the belle of her rural Minnesota high school to ghostwriting a failing series of young-adult novels. She lives alone in a trashed Minneapolis high-rise apartment with her yappy little dog, drinking too much and hammering prescription medication and wearing stick-on false boobs and waking up next to guys she doesn't know. It's a fearless performance, but beyond sheer voyeurism Reitman and Cody never give us a reason to pay attention to Mavis, let alone give three-quarters of a crap about what becomes of her.

Mavis is way behind on a deadline and for muddled reasons becomes fixated on a long-ago boyfriend, Buddy (Patrick Wilson), who is still back in Mercury, Minn., with a wife and a baby and a 21st-century version of the suburban lifestyle that seems half satirical and half idealized. As with a lot of "Young Adult," I can appreciate what Cody and Reitman are trying to get at here, or at least what I think they're trying to get at. Mavis may be flamin' hot, especially by the modest standards of Mercury, but she's also rootless and utterly nuts, not to mention completely incapable of noticing that Buddy and his low-key, vaguely hip wife, Beth (Elizabeth Reaser), feel sorry for her, rather than in awe of her. But the story also feels schematic and unconvincing, as if assembled from fragmentary Diablo Cody ideas: What if the cutest girl from high school became a writer? And a delusional narcissist? What if her old boyfriend was completely insensible to her efforts to lure him back? (Has Cody discussed this scenario with any actual, you know, men?) And what if she hooked up with the most unlikely possible person from her past?

That would not be Buddy, who is attractive enough (if as dull as the Minnesota summer day is long) but rather Matt Freehauf, a portly, disabled loser whom Mavis claims not to remember, even though they had adjacent lockers. Patton Oswalt gives the movie's most heartfelt and generous performance, by far, but Matt's character is also pushed beyond the point of grotesquerie. He's still suffering from crippling and entirely too intimate injuries he received during a vicious high school gay-bashing (and, no, he's not even gay); he lives with his sister and spends his leisure hours mashing up action figures and repainting them. As he tells Mavis when she complains about someone calling her a zombie, "I'm a fat nerd. I know what a zombie is." But that's not even an especially funny joke, and the whole idea that Mavis would be drawn to Matt -- because they're both broken and desperate or whatever -- lies at the outermost vector of screenplay plausibility.

There are plenty of sharp aperçus and poignant character moments in "Young Adult," to be sure, but it's hard to tell where the movie's awkward comic knife edge slides away into clunkiness. I never found Mavis' relationships with Buddy and Beth and the rest of Mercury's inhabitants remotely convincing in human terms, and as "Young Adult" went on I had to struggle ever harder to resist interpreting it as a severely messed-up work of self-analysis or autobiography.

As a general rule, I'm delighted to encounter movies that resist the American tendency to deliver redemption or healing (or, still worse, instruction) in the final act; we all know damn well life doesn't work that way. But after staging a big and pretty satisfying all-character explosion, Cody ends this story with a flat, irresolute non-twist that's meant to be subversive but just feels mean and a little sick. It's one thing to write a black-comic tale about an utterly obnoxious character, and quite another to make apologies for her and send her back to her despicable life, leaving us profoundly grateful that we never have to spend time with her again.