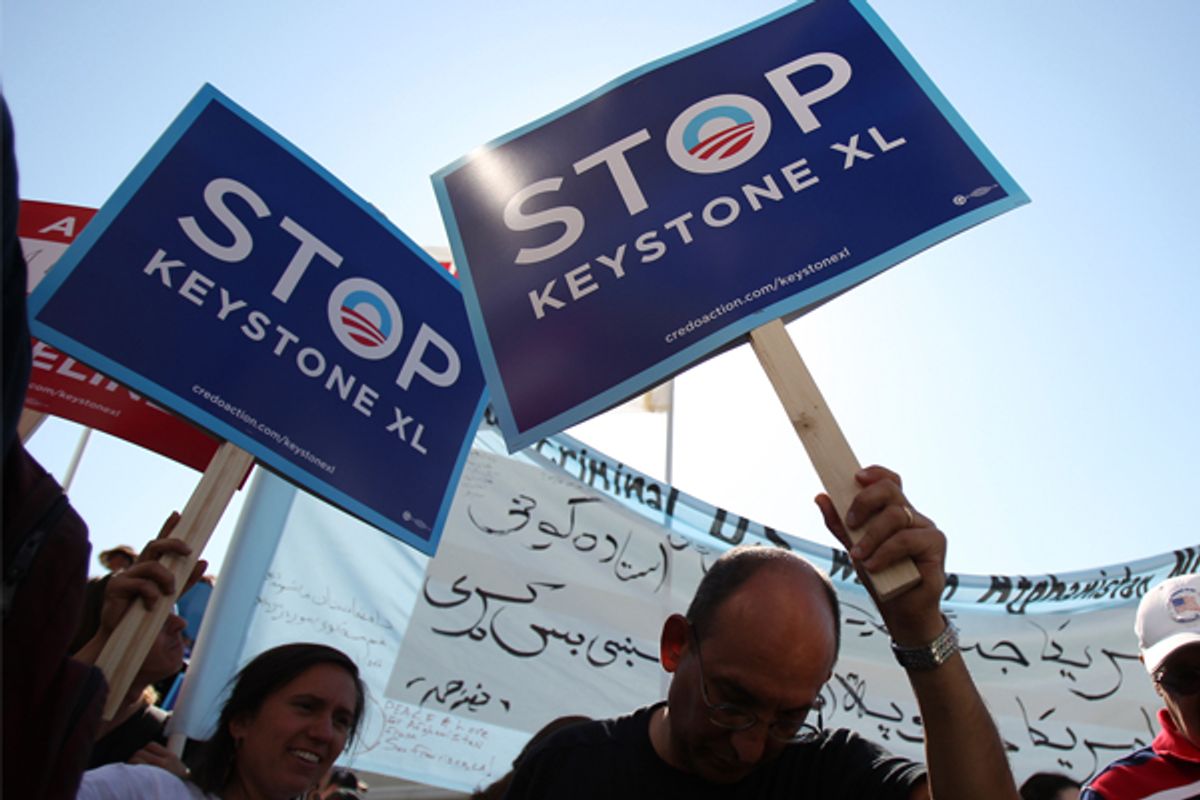 Ever since the Obama administration announced it would delay its final decision on the controversial Keystone XL pipeline until 2013, Republicans in Congress have been plotting ways to get around the lengthier review process ordered by the president, which would include a rigorous assessment of health and environmental impacts by the State Department.

Last Wednesday, a group of Republican senators, including Nebraska Sen. Mike Johanns, co-sponsored a bill that would fast-track the pipeline, requiring President Obama to issue a decision on the pipeline within the next 60 days and precluding a more in-depth review of its impacts. Now, Nebraska Rep. Lee Terry, with support from House Speaker John Boehner, is seeking to attach a provision that would force a quick decision on the pipeline to a bill designed to extend unemployment benefits and payroll tax cuts, which are currently set to expire Jan. 1 of next year.

The proposal to extend unemployment benefits and the payroll tax cut has divided the Republican Party, with some arguing that the measures are too costly and will create little economic benefit, while others are reluctant to oppose measures that would provide relief to tens of millions of American workers. Sensing advantage, President Obama and the Democrats are pressing hard for approval of the extension of the benefits and the payroll tax cut.

Boehner recently described his payroll tax proposal as turning “chicken shit into chicken salad,” indicating that he’s going to make Democrats pay for any legislative victory. He knows that a bill proposing to hasten the Keystone review process would never make it through Congress on its own, and is hoping to keep the pipeline’s adversaries from scuttling the proposal by attaching the quick review to popular legislation that Democrats are determined to pass.

Terry’s proposal would transfer decision-making authority from the State Department to the Federal Energy Regulatory Commission (FERC) and would require FERC to issue a ruling on the pipeline almost immediately, within 30 days of receiving a permit application -- despite the fact that, as George Zornick points out, “FERC has not been involved in the Keystone process whatsoever,” and has no prior experience with similar projects.

Environmental groups claim the strategy is simply an attempt to evade a public debate about the pipeline: Environmental leader Bill McKibben described the negotiations as going on “behind closed doors in money-filled rooms." Kim Huynh, a dirty fuels campaigner at Friends of the Earth, called the House GOP strategy an attempt to slip the Keystone decision “under the radar of the U.S. public, limiting the ability for real debate.”

While Huynh called the bill a “really long shot” for congressional approval, Friends of the Earth and other environmental groups have mobilized to block it with a petition signed by a hundred thousand people asking Senate Majority leader Harry Reid and House Minority Leader Nancy Pelosi not to give in to Republican pressure. Becky Bond, the political director of CREDO Action,  which organized the petition, said that the group is only asking that Democrats stick to their guns, saying that people are “sick of being thrown under the bus to appease Republicans” in what she described as a “game of chicken” between the two parties.

In an open letter to Reid, a group of five Democratic senators, including Bernie Sanders, I-Vt., Sheldon Whitehouse, D-R.I., Patrick Leahy, D-Vt., Ron Wyden, D-Ore., and Frank Lautenberg, D-N.J., called the attempt to seek legislative go-ahead for the pipeline “completely inappropriate,” warning that removing the State Department from the process of making decisions about cross-border projects would “set a troubling precedent.” After meeting with Canadian Prime Minister Stephen Harper on Wednesday afternoon, Obama said, “Any effort to try to tie Keystone to the payroll tax cut, I will reject.”

Still, while this particular attempt to get the Keystone pipeline approved is unlikely to succeed, it is only one of several environment-related riders the GOP is seeking to sneak into various pieces of upcoming spending legislation, including proposals that would block the EPA from regulating agricultural runoff and limiting toxic air pollution from cement kilns.