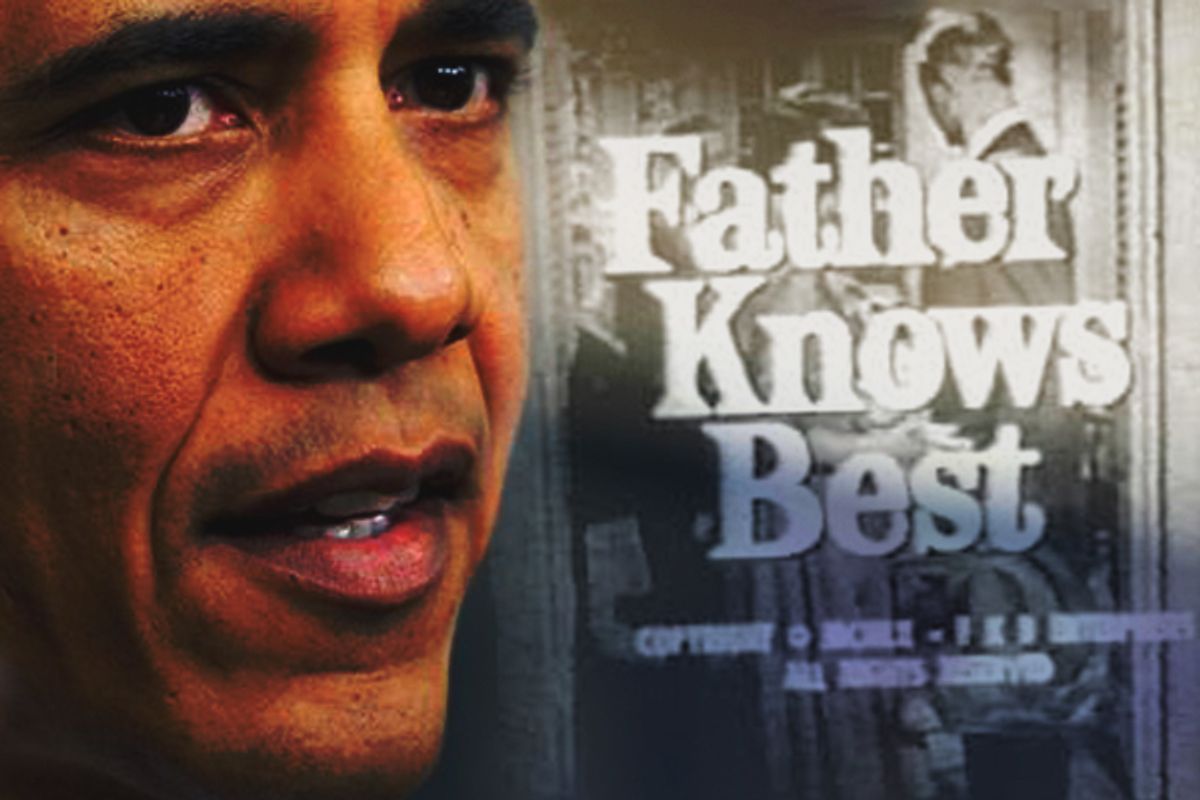 When will Barack Obama learn how to talk thoughtfully about women, women’s health and women’s rights?

On Wednesday, Health and Human Services Secretary Kathleen Sebelius unexpectedly overruled the Food and Drug Administration’s recommendation that emergency contraception be sold on drugstore shelves and made available without a prescription to women under the age of 17. The move came as a surprise blow to healthcare and women’s rights activists, the kinds of people regularly counted as supporters of the Obama administration.

Today, Obama doubled down on his disregard for the concerns of these groups, claiming that while Sebelius made her decision without his counsel, he agreed with it. Obama pooh-poohed the findings of the FDA, which had concluded that Plan B pills posed no medical hazard and supported Sebelius’ official argument, citing a lack of confidence that “a 10-year-old or 11-year-old going to a drugstore would be able to, alongside bubble gum or batteries, be able to buy a medication that potentially if not used properly can have an adverse effect.” The logic expressed today by the president, and yesterday by Sebelius, is ludicrous: Medicines like Tylenol – which have been proven to have adverse effects in high doses – are available by the truckload on drugstore shelves, at prices far cheaper than the $30 to $50 it would cost a preteen to purchase just one dose of Plan B, let alone go wild with it.

But part of what was most disturbing about Obama’s statement was his reliance on language that reveals his paternalistic approach to women and their health.

“As the father of two daughters,” Obama told reporters, “I think it is important for us to make sure that we apply some common sense to various rules when it comes to over-the-counter medicine.”

First of all, the president was not talking about “various rules.” He was supporting a very specific rule, one that prevents young women from easily obtaining a drug that can help them control their reproductive lives, at an age when their economic, educational, familial and professional futures are perhaps most at risk of being derailed by an unplanned pregnancy. “As the father of two daughters,” Obama might want to reconsider his position on preventing young women from being able to exercise this form of responsibility over their own bodies and lives.

But as an American, I think it is important for my president not to turn to paternalistic claptrap and enfeebling references to the imagined ineptitude and irresponsibility of his daughters – and young women around the country – to justify a curtailment of access to medically safe contraceptives. The notion that in aggressively conscribing women’s abilities to protect themselves against unplanned pregnancy Obama is just laying down some Olde Fashioned Dad Sense diminishes an issue of gender equality, sexual health and medical access. Recasting this debate as an episode of "Father Knows Best" reaffirms hoary attitudes about young women and sex that had their repressive heyday in the era whence that program sprang.

A question of who should be allowed access to a safe form of contraception is at its root a question of how badly we want to, or believe that we can, police young women’s sexuality. When Obama is talking about his daughters, we know he’s not really basing his opinion on an anxiety that they might suffer the adverse effects of drinking a whole jug of Pepto-Bismol or swallowing 50 Advil, things that any 11-year-old who walks into a CVS with a wad of cash could theoretically do. When he says that he wants to “apply common sense” to questions of young women’s access to emergency contraception, he is telegraphing his discomfort with the idea of young women’s sexual agency, or more simply, with the idea of them having sex lives at all. This discomfort might be  comprehensible from an emotional, parental point of view. But these are not familial discussions; this is a public-health policy debate, and at a time when “16 and Pregnant” airs on MTV, the fact that a daddy feels funny about his little girls becoming grown-ups has no place in a discussion of healthcare options for America’s young women. It is also nearly impossible to imagine a similar use of language or logic to justify a ban of condom sales.

Moreover, Obama’s invocation of his role as a father is an insult to the commitments and priorities of those on the other side of this issue. Are we to believe that those who support the increased availability of emergency contraception do not have daughters? That if they do, they care less about those daughters than Barack Obama does about his? And that if they do not, they cannot possibly know better than a father of daughters what is best for young women? Why should we be asked to believe that Obama’s paternity imbues him with more moral authority on the subject of women’s health and reproductive lives than the investments of doctors, researchers and advocates who – regardless of their parental status – have dedicated their lives to working on behalf of increased reproductive health options. This line of argument is no better than the Mama Grizzly argument developed by Sarah Palin during 2010's midterm elections, in which she asserted that her band of super-conservative mothers were qualified for office because "moms just know when there's something wrong."

Barack Obama has long had a tin ear for language that has anything to do with women and even more specifically with women’s rights. While on the campaign trail for president in 2008, he waved off a female reporter who asked a question about the future of the auto industry, referring to her diminutively as “sweetie.” The same year, attempting to play both sides on the issue of reproductive freedom, he gave an interview with a religious magazine in which he asserted his support for states’ restrictions on late-term abortions as long as there was an exception for the health of the mother, but added that he didn’t “think that ‘mental distress’ qualifies as the health of the mother.” Attempting to recover from that line and reassert his pro-choice bona fides, Obama later clarified that of course he believed in a medical exemption for “serious clinical mental health diseases,” just not when seeking a late-term abortion is “a matter of feeling blue,” perpetuating a wildly irresponsible vision of the rare and difficult late-term abortion as a moody impulse-buy.

Today also isn’t the first time he’s used references to members of his family to make a larger offensive point about women. Back in 2009, when charges that his officially female-friendly administration included some boys’ club tendencies hit the front of the New York Times, Obama dismissed the claims as “bunk.” Reporter Mark Leibovich noted at the time that the president “often points out that he is surrounded by strong females at home,” an argument that not only mimics an old saw about how being henpecked by women is equivalent to respecting them, but reflects a dynamic as old as patriarchal power itself and sidesteps the question of how strong females are treated at work. In 2010, while appearing on "The View," Obama made a creaky Take-My-Wife-Please joke about how he wanted to appear on “a show that Michelle actually watched” as opposed to the news shows she usually flips past. The joke being that his missus, the one he met when she mentored him at a high-powered law firm, just doesn’t have a head for news delivered by anyone other than Elisabeth Hasselbeck.

It should no longer come as a surprise that the president of the United States is, on perhaps an unconscious level, an old-school patriarch. What’s startling is the degree to which Obama seems not to have learned from any of his past gaffes, how no one seems to have told him – or told him in a way that he’s absorbed – that the best way to address a question of women’s health and rights is probably not by making it about his role as a father.

This might be an especially valuable chat to have with the president as he moves into 2012 and toward an election in which he is going to be relying on the support of people he has just managed to anger, offend and speak down to -- women. The least he could do is learn to address them with respect.