"We Need to Talk About Kevin": A mother-son horror film

Don\'t call it a school-shooting movie! \"We Need to Talk About Kevin\" is a haunting tale of a family\'s implosion 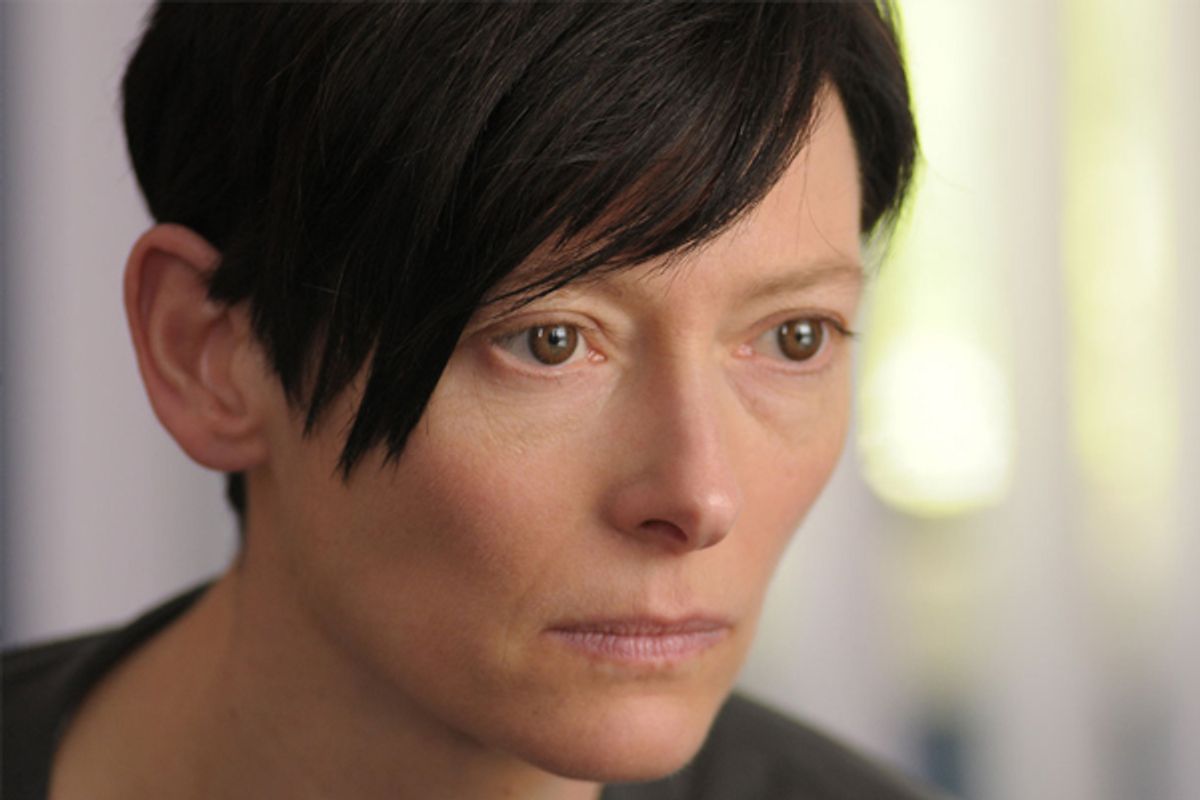 Tilda Swinton in "We Need to Talk About Kevin"
--

When two youngish guys in suits with briefcases show up at the front door of Eva, a scraggly-haired, anorexic-thin New York suburbanite played by Tilda Swinton in “We Need to Talk About Kevin,” she has plenty of reasons to be alarmed. After all, Eva is a target in her town: People smash eggs in her supermarket cart, assault her in parking lots, splatter red paint across the front of her decrepit rented bungalow. So when it turns out that these guys want to talk to her about the afterlife, Eva laughs with relief. She already knows about that, she tells them. “I’m going straight to hell. Eternal damnation, the whole thing.”

That might be the only real laugh line in Scottish director Lynne Ramsay’s masterfully crafted but unrelentingly bleak film, which was adapted from the much-discussed novel by Lionel Shriver. But as Swinton often insists in talking about her role, there are scattered elements of comedy in "We Need to Talk About Kevin," and it is first and foremost a love story, albeit one any parent may find it painful and difficult to sit through. But Eva’s not cracking a joke with those missionaries. She might as well have told those guys she’s already in hell — none of the torments imagined by Dante could exceed what she’s already lived through.

“We Need to Talk About Kevin” is a lot of things: A visual essay on the color red, a triumph of sound design and musical-visual counterpoint, a chronologically disordered, collage-style portrait of a family’s disintegration; a character study of a woman who surrendered her urbanity and her independence for her family life, and who reaps the whirlwind from those seeds of bitterness. It’s also a European director’s movie about the soullessness of American suburbia, which bothers me a little because it’s such a hackneyed target, but would bother me a lot more if it weren’t so convincingly rendered. But when you break it down to essentials, "We Need to Talk About Kevin" is a horror movie aimed at parents, and especially at mothers. All discussion of its craft and subtlety (which are considerable) or about how great or how evil it may be are constrained by that fact.

The monster isn’t Eva, although she may have some doubts about that. The monster is her lithe and handsome teenage son Kevin (played by Ezra Miller in the present tense, and even more unnervingly by Jasper Newell as a younger child), who has, we gather, committed an unspeakable, headline-grabbing crime. We know that from the beginning of the movie, by the way; Ramsay hopscotches compulsively backward and forward through time, frequently alighting on the night when Eva must push her way through a crowd of stricken onlookers and emergency vehicles surrounding her son’s high school. It’s the scale of Kevin’s monstrous act, and its tangled prehistory, that are gradually revealed. (The screenplay is by Ramsay and her partner Rory Stewart Kinnear.)

But Ramsay isn't particularly interested in a realistic story about a Columbine-type event, and both she and Swinton have sought to distance this film from that genre. "We Need to Talk About Kevin" is far more psychological and symbolic in nature than that setting suggests, unleashing a potent flow of dreamlike images that seek to drill through your brain and down into the unconscious. It's barely at all about the what or how of Kevin's crime, and all about the enormous, insoluble mystery of why, found in the enigmatic relationship between mother and son. As she showed in her earlier films “Morvern Callar” and “Ratcatcher,” Ramsay has an extraordinary cinematic gift, and for the first half-hour or so “Kevin” is more like a brilliant, avant-garde sound-and-vision construction than a conventional film, a series of postcards delivered from Eva’s disordered psyche.

Indeed, there are so many great things happening on almost every level of this movie, from Swinton’s haunting, magnetic and tremendously vulnerable performance, which is absolutely free of condescension to the suburban American wife-ness of her character, to the many unsettling individual moments. There’s the way Kevin puts way too much jam on his white-bread sandwich, and the way Eva drifts hollow-eyed through the empty aisles of a supermarket. There’s the world’s most depressing holiday party, complete with random lechery and the upbeat bogosity of Wham! singing “Last Christmas”; there’s the oddly powerful disjunction of hearing Buddy Holly's “Every Day” while Eva drives through a menacing crowd of Halloween revelers. (If you like to count such things, Ramsay may be offering a nightmarish tribute to the famous Halloween sequence in Vincente Minnelli's "Meet Me in St. Louis.") There's John C. Reilly, nearly stealing the whole show in his low-key, terrifying performance as a well-intentioned dad who just wants to reassure both Kevin and Eva that everybody loves everybody and it will all be fine.

On first viewing the film last spring at Cannes, I frankly found it a little hard to take. Let's make that a lot hard to take; I recommend this movie to other parents only with a major asterisk attached. It could definitely prove a powerful therapeutic or cathartic exercise, but give yourself time to decompress afterward and have an adult beverage (or three) with someone you trust. But odds are your relationship with your kids will look awesome next to the post-Oedipal horror show between Eva and Kevin. In my initial review, I wrote that Ramsay seemed devoted to scaring the crap out of us with the highly original observation that sometimes bad things happen for no reason, and suggested that this was the movie Michael Haneke and Lars von Trier would make together, if they started out with a whole bunch of Quaaludes and cough syrup.

I'm walking that judgment partway back now, partly because Haneke and Von Trier are guys and this film definitely reflects a woman's point of view on Eva's life choices and indifferent mothering. Even beyond that, the subject of "We Need to Talk About Kevin" may precisely be our fatal need to seek causality and comprehension in a chaotic universe. Was Kevin just a demon seed from day one, a baby so colicky his mommy took him out into Manhattan traffic, next to a road-construction site, just to drown out the noise? (Sound designer Paul Davies has filled this picture with all sorts of disconcerting audio effects, but that screaming baby — Jesus!) As a child, he’s a malicious, canny, power-hungry creature, deliberately crapping in his pants at age eight, vandalizing his mother’s room, refusing to answer simple questions politely. “Before you were born, Mommy used to be happy!” Eva tells him in one memorable scene. “Now Mommy wakes up every day and wishes she were in France!”

After all that, of course, Eva can’t shake the sense that her own ambivalence about motherhood poisoned the well. That predates Kevin and his bad attitude; we see her in pregnancy yoga class, where she was the only expecting mom not to flaunt her enormous belly. Now, if half-assed parenting produced psychopathic killers, we’d have a whole lot more of them, but anybody who’s had kids can grasp the underlying terror. Maybe the scariest thing in “We Need to Talk About Kevin” is that Eva understands that she and Kevin have a connection, and that his coldness and viciousness toward her are his special way of showing affection. Only she can see him as he really is, while his father (Reilly) and little sister (Ashley Gerasimovich) are confused onlookers, whom he can easily mislead. Whatever made him into what he is, it’s also in her, and his violent acts are a return gift in kind.

"We Need to Talk About Kevin" opens Dec. 9 for a one-week Oscar-qualifying run at the Angelika Film Center in New York and the Cinefamily in Los Angeles, with wider release to follow beginning Jan. 27.