When a Democratic dream turns into a nightmare 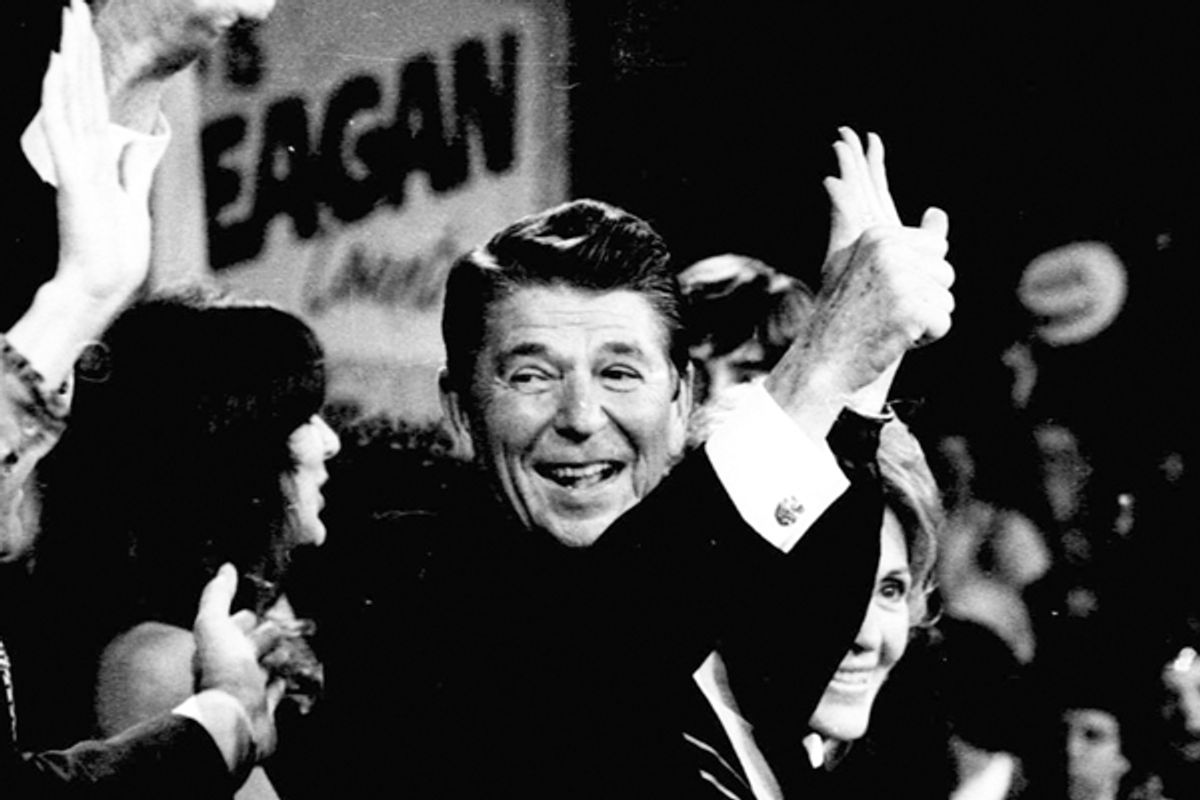 Ronald Reagan gives the thumbs-up sign as he leaves the podium after addressing supporters at his Los Angeles election headquarters on Nov. 5, 1980. (AP)
--

The most pleasant political development of 2011 for the Obama White House and its allies has undoubtedly been the sudden surge of Newt Gingrich in the Republican presidential race. With less than a month to go until the Iowa caucuses, the 68-year-old Georgian has opened leads that are somewhere between sizable and massive in national polls and in three of the four key early states -- and in the fourth state, New Hampshire, he's cut deeply into Mitt Romney's once-formidable advantage and is threatening to vie for first place. It is no longer absurd to treat Newt as a serious threat to win the nomination.

Which explains the jubilation on the left. If Republicans actually pick Gingrich, "he would be the best thing to happen to the Democratic Party since Barry Goldwater," Rep. Barney Frank proclaimed last week, while Sen. Tom Harkin offered that the one-time House speaker's nomination would be a "heaven-sent" development for Obama and commentator Mark Shields predicted that with Gingrich leading the GOP ticket "it will not be a competitive race. It will be a landslide."

It's certainly possible, even likely, that this giddiness is well-placed. After all, the last time Gingrich commanded the national spotlight -- when he was House speaker from 1995 to 1998 -- his thin-skinned arrogance, erratic style, and inflammatory and overly combative rhetoric produced some of the most miserable poll numbers ever recorded by a congressional leader. To Democratic candidates up and down the ballot in the 1996 and 1998 elections, he was the gift that wouldn't stop giving. With all of this history, all of these self-destructive tendencies, and all of the personal and professional baggage he's taken on since being pushed out as speaker, it's hardly unreasonable to conclude that Gingrich would perform substantially worse against Obama than a generic Republican presidential candidate.

There's just one thing: The last time an embattled Democratic White House and its allies got excited like this, things didn't quite work out like they expected.

This was back in 1980, when Jimmy Carter was well on his way to beating back a primary challenge from Ted Kennedy and the president's team began to plan for the general election. They liked what they saw: Republicans were on the verge of nominating the standard-bearer of the same conservative movement that 16 years earlier had nominated Goldwater -- whose provocative, far-right views terrified swing voters outside the South and helped Lyndon Johnson administer one of the most thorough general election beatings in history.

Carter was in far rougher shape than LBJ had been; steep inflation and interest rates, the Iran hostage crisis, and a divided Democratic Party had conspired to bring his approval ratings to the low-30s -- generally lethal territory for an incumbent. But he and his team believed that Ronald Reagan would be easy to portray as a trigger-happy right-wing ideologue and that this image would scare away swing voters just like it had in '64.

As the primary season wound down in the spring of '80, there was reason to think they were right. Reagan, who had nearly toppled Gerald Ford in a 1976 primary challenge, came to the race as the clear front-runner, but the nominating process nonetheless proved draining to him, with the party's moderate and liberal voices (they existed in real numbers back then) frantically warning GOP voters that Reagan would be a risky general election candidate. Two candidates running to his left, George H.W. Bush and John Anderson, took turns highlighting his ideological extremism, each emerging briefly as a serious contender for the nomination. When Anderson wounded Reagan with a series of strong showings in New England, Ford even spoke up to question Reagan's electability and to make himself available for a last-minute draft.

A solid victory in Illinois steadied Reagan's campaign and ended the Anderson boomlet and Ford chatter, but an ABC News poll starkly illustrated the damage that had been done: Against Carter and his dismal approval ratings, the survey showed Reagan losing by 18 points. (By comparison, Ford ran 10 points ahead of Carter in the same poll.) That Reagan would end up extending the Carter presidency for another term became conventional wisdom. Typical was this March '80 column from Joseph C. Harsch, the longtime writer for the Christian Science Monitor:

And Mr. Carter's chances for re-election go up every time another vigorous and moderate Republican like Sen. Howard Baker or a vigorous, modern, decisive, and experienced Republican like John Connally has to withdraw from lack of support.

There once was a possibility that some Republican would come along who could contest the middle ground of politics with Mr. Carter and give him a real run in the November elections. Suppose the Republicans had been capable of putting together Jerry Ford and John Anderson as their candidates. A Ford-Anderson ticket would have had an excellent chance of winning out over the expectable Carter- Mondale ticket, and perhaps even of reconverting the Republican Party from a class to a national party.

But such a prospect has gone glimmering now. The Republican Party is determined to have Mr. Carter's favorite Republican as their candidate. Every time Mr. Reagan wins another primary the White House cheers, on the assumption that Mr. Reagan is the easiest Republican for Mr. Carter to defeat in November.

From there, you know the rest. As the spring and summer wore on, the GOP closed ranks around Reagan (it helped that he added Bush to the ticket), while Anderson went off to run a third-party campaign that, because of his own liberalism, threatened Carter as much as Reagan. Meanwhile, with stagflation and the hostage crisis persisting, Carter's own approval ratings never budged. And as general election candidate, Reagan proved to be far warmer and more reassuring than his intraparty critics had feared and Democrats had hoped. He opened a large lead over Carter in the summer months, saw it tighten around Labor Day after the Democratic convention, then pulled away late and cruised to a 44-state romp on Election Day. Over and over, Carter pleaded with voters to reject Reagan's extremism, but they simply tuned him out.

Does this mean that history is bound to repeat itself if Newt walks away with the nomination? Not necessarily. Obama isn't in as bad shape as Carter was, while Gingrich, as Lloyd Bentsen might say, is no Ronald Reagan. Gingrich may simply be the Goldwater that everyone thought Reagan was back in 1980.

Then again, when voters are motivated enough to throw out an incumbent, the bar for the opposition party isn't that high. Reagan's triumph showed this. Had he been the nominee in '76, when voters were still angry with Republicans for Watergate and Carter was just a refreshing outsider from Georgia, all of the general election attacks on Reagan that fizzled in '80 would have had a very different impact. Which is another way of saying that when the climate is just right, very strange things can happen.