When Amazon took my gold medal away

A novelist was thrilled when her debut made Amazon's mid-year best-of list. Then the new Jeffrey Eugenides arrived 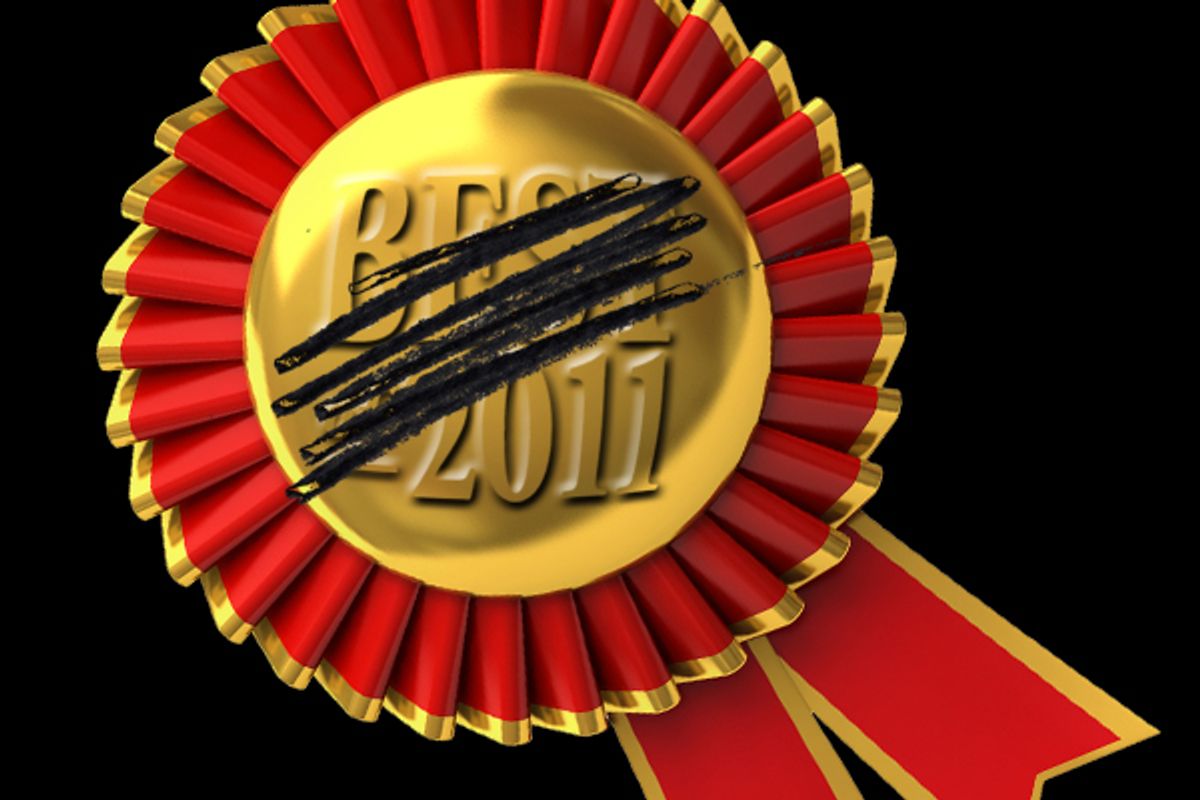 Congrats! You're the best. For now. That's the essence of an email I got back in June, when my novel "The Adults" was listed as an Amazon Best Book of 2011 … So Far. You haven’t heard of this list? Two weeks ago, I would have directed you to my Amazon page, where you’d see the gold badge on my book. It was inscribed Best Book of 2011, and then in small print, “So Far.”

It was enough of an honor for me. The shiny addition to my Web page would boost sales, regardless of what was written inside it. A gold badge plastered to a rock would help it sell, even if what was written on the badge was, “This Rock Sucks.” It draws attention to the rock, makes you at least consider its worth.

As a debut novelist, that is all I had hoped for. So I properly celebrated, meaning, I posted the news on Facebook, drank some champagne with friends, who were very enthusiastic, shouting, “That’s the coolest thing ever” and “Wow, I shop on Amazon!”

Then I called my parents. Talking to parents is always easier when drinking champagne, and drinking champagne is more fun when it’s because of your achievement. Even if that achievement is offered with a possible expiration date -- December, the month that the final best books lists start to emerge. As the phone rang, I tried to savor the honor, ignored its ephemeral nature, and Harold Camping's prediction that the world would end on Oct. 21, before the year-end lists. That didn't seem like the worst thing in the world.

“So far?” my mother said through the phone. “What do they mean, so far?”

Yes, I explained. Amazon likes "The Adults," but can’t commit to declaring it the best, because the year is not yet over, and surely something much better will come out, especially closer to the holidays when the big names are published.

My mother didn't think it made sense to honor something and hedge your bets at the same time. And the more she pointed out the absurdity of the “So Far” on the bottom of the badge, the more it became the smudge on my contact. I put my finger over the two words, imagined what it’d look like if it were gone by December. My mother was right. A gold badge is not quite a gold badge if it’s halfhearted. Even if it’s shiny-looking, the doubt is there -- especially when it's written right within its border.

“You don’t have to be diplomatic. Not with me, sweetheart,” my mother said.

Months passed. The world, for better or worse, did not end. December arrived. The best books lists came out, and I did not make Amazon's final cut. My halfhearted gold badge was removed from my page. My friends came over again, and this time we drank Jameson.

“Imagine,” a friend said, “a teacher giving you a gold star on your elementary school essay. Congrats! You’re the best! And then you look closer, and you see ‘So Far’ inscribed in the middle of it. So mean.”

Another friend said, “At the very least, you are still kind of Buzz Aldrin.”

“At least you were invited to the party,” another offered. “I didn’t get sort of celebrated for anything this year.”

That was how I felt; at least I was invited to the party. That was how I always felt, in high school, if an invitation found its way to my locker. Me? Out of all these hundreds of people in our school? You want me to come and stand by your bag of potato chips and Twizzlers and tell stories about my slightly feral cat?

I always arrived too early to those parties, which might explain why I am always late now. When you are the first to show up, you stand around with the other early birds. Usually the only thing I had in common with the early birds is that we were early, and we are desperately waiting for everyone else to show up.

In the meantime, I started talking to a boy from my math class. He liked my earrings. I said, "Thanks." We had math together. We started making fun of our math teacher. Turned out we had more in common. We both disliked our math teacher and agreed that her skirt made her look like a Fisher Price toy. Soon, we were laughing. I liked him. Who would have thought, this early into a party, already finding an interesting conversation? But he was still looking over his shoulder, waiting for the others, and so was I, even though I was pretty sure were both enjoying the conversation. Because all around us people were arriving and new conversations were forming. The room was loud with new laughter. Better laughter. Louder and fresher laughter. It had to be, because isn’t that the point of a civilization, that we advance with time, and the party gets better as the night goes on?

The cool kids were not even here yet; they showed up the latest, of course. I looked at my watch. Turned out, I wasn’t wearing a watch. But I could feel time passing, the room changing as it filled, and I suddenly wanted to go back to the time when I arrived, when it was just me and the nice boy from my math class, enjoying our small but surprising conversation. Looking over his shoulder was tiring, but I couldn’t help myself. I needed to see who was coming through the door, and figure out how they might change everything. I prayed the cool kids would get lost, that the world would end. No more cool kids, no more better books, no more lists.

And the cool kids came, except this time in the form of Russell Banks, Haruki Murakami, Jeffrey Eugenides and others who made Amazon's recently released Best Books of 2011 list. This would be upsetting, except who is outraged when outdone by these three giants of fiction? Who gets upset when they are cut alongside Teju Cole’s "Open City" or Arthur Phillips' "The Tragedy of Arthur"?  It was an honor to be noticed. I was grateful for those months on Amazon with a gold badge, the sales it garnered. Just like I was grateful for those minutes with the boy from my math class who surprised me with his humor, even if he did walk away shortly after to go talk to the girl with the loud laugh from my bio class.

I wouldn't want their job anyway. It’s impossible for me to declare that something is absolutely the best, confidently, and with no conditions attached. I’m the most indecisive person I know. Well, probably. Diners terrify me with their book-length menus, married couples impress me with their lifelong contracts. I envy the people who, when online banking, chose the security questions: Who is your favorite painter? What is your favorite book? What is your favorite color? To think that this is even possible, one part of the rainbow being better than another? That someone logs onto their checking account in one year, two years, three years, and still confidently answers: Oh, Pollock. Because I can’t even make a list for various blogs that ask me to select the top 10 books of 2011. I can’t even choose one book when asked about this year’s best, and I don’t think I want to. I don’t want to pretend blue is so obviously the best anymore. My only honest response is to say, “The one I’m reading.” So far.

Alison Espach is the author of the novel "The Adults."