Can a big coordinated effort save Occupy? 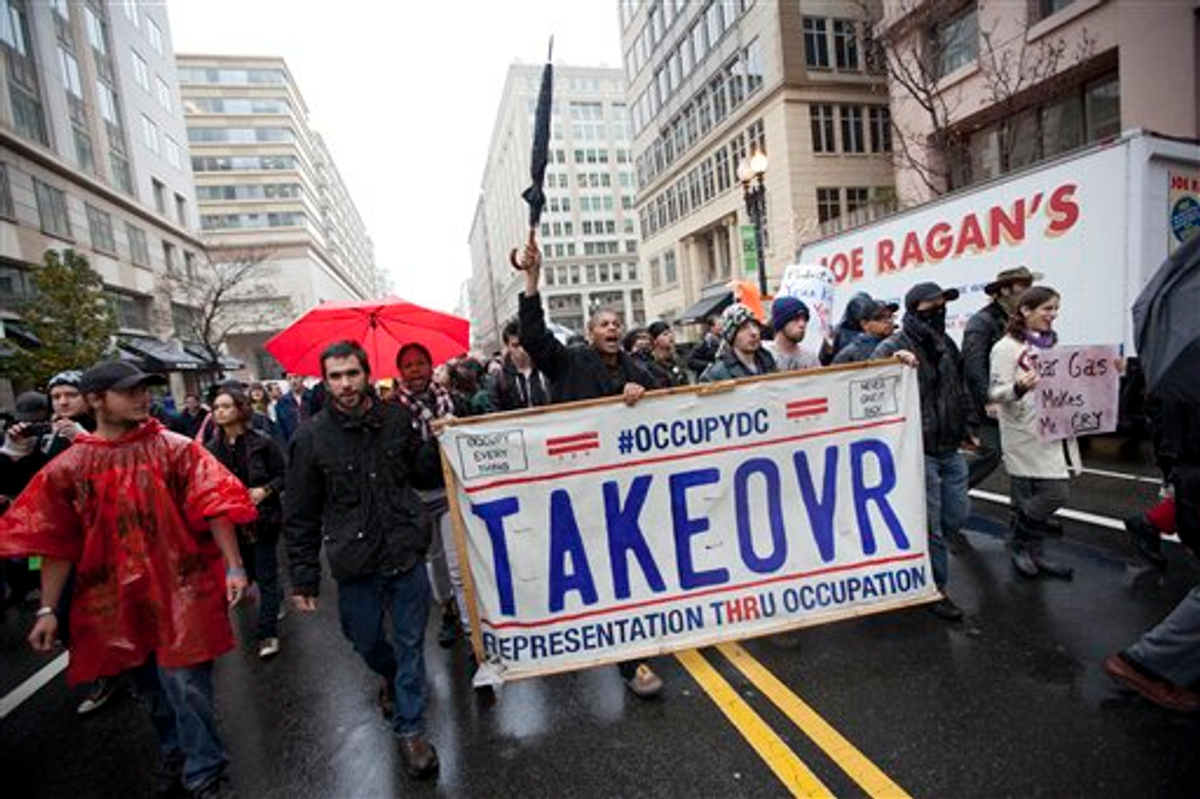 OAKLAND — As anti-Wall Street protesters attempt to regroup and settle in for winter after a series of police raids that stripped much of the movement of its signature camps, protesters on the West Coast are staging a comeback.

On Dec. 12, Occupy movements from Seattle to San Diego say they will shut down their local ports, temporarily stopping the flow of capital on the West Coast. Organizers say they aim to disrupt the business of the “1 percent” — in this case, the corporations that own shipping terminals and do business at the ports.

If successful, shutting down the West Coast port system would be a massive show of power for a movement that in some cities seems to have lost some of its momentum along with the camps. It would also mark the first time the loosely organized and very decentralized Occupy movements have coordinated in a major way.

The action comes at a pivotal moment for the two-month-old movement, with protesters facing down a chill both from dropping temperatures and authorities who are increasingly losing patience with tents outside City Hall.

In recent weeks, police have cleared large encampments in New York, Los Angeles, San Francisco, Philadelphia and elsewhere. In Boston, protesters were ordered Thursday to clear out by midnight, although the deadline passed and police did not evict them.

“It’s a really incredible opportunity to build infrastructure for communication between the different movements,” said Jed Johnson, a 26-year-old baker and barista who attended a recent port-shutdown planning meeting in Oakland.

“There’s a little bit of a lull right now,” he added. “Stuff like this is important to keep people out here.”

The move has also galvanized Occupy movements in other cities. Texas occupiers have called for protesters to gather in Houston and march on that city's port. Even landlocked Denver is trying to get in on the action, with plans to protest at a local Wal-Mart distribution center.

In Oakland, protesters like Johnson are hoping for a repeat of Nov. 2, when tens of thousands converged en masse on the Port of Oakland, successfully stopping the flow of goods overnight.

It could be more complicated this time. The powerful International Longshore and Warehouse Union, which represents most of the port workers whom protesters say they are supporting, has publicly rejected the blockade effort.

“It appears here that outside groups intent on driving their own agendas outside of the ILWU and the Coast Longshore Division are attempting to co-opt the Union,” ILWU leaders wrote in a Nov. 21 memo to union locals.

Some protesters say they believe the rank-and-file port workers are with them and that union leaders are simply being careful to avoid legal problems that could arise if it appeared they were endorsing the shutdown.

Others are taking pains to avoid potential conflicts they worry could strain the warm relationship Occupy has shared with labor groups so far.

In Vancouver, Canada, Occupy member Mya Mayhem said protesters are still talking with local ILWU members and haven’t decided whether their demonstration that day will include attempting to halt port business.

“It is definitely our plan to send as much of a message as we can to union busters and environmental polluters but (we) are striving to maintain a good working relationship with our unions at the same time,” Mayhem wrote in an email.

“As soon as we find out what method will best represent the 99 percent we will go ahead,” Mayhem added.

In Oakland, officials are taking the threat of a second shutdown seriously. Port commissioners recently took out a full-page ad in local papers, reading in part:

“Shutting down the Port of Oakland is a bad idea. Another shutdown will only make things worse — diverting cargo, tax revenue, and jobs to other communities. It will hurt working people and harm our community.”

To bring port traffic to a standstill, protesters need to have enough people blocking terminal entrances so that a local arbitrator declares the situation a health and safety hazard, which will effectively stop port activity until the crowds dissipate or are cleared away.

In Oakland, it remains unclear whether protesters can mobilize those numbers the way they did on Nov. 2, when massive crowds streamed into the port and easily shut it down.

Unlike on Nov. 2, these days there is no camp outside City Hall. A small number of protesters — including at least one "tree-sitter" perched in a Sycamore — have been maintaining a vigil at the quiet plaza. But the space no longer provides the sense of community and visible reminder of the movement’s existence it did when there were 180 tents in it.

“There is a sense of loss,” said Lucas, a member of Occupy Oakland’s finance committee who, like many protesters, gave only his first name. “What the camp did was provide a sense of place.”

But Lucas said he has faith that protesters will carry on without their tents. “The fact that the camp is not here does not change that we are living in a time of the most radical increase in inequality in history,” he said.

In economically hard-hit California, the movement does appear to have traction with the public. A recent Field Poll of 1,000 Californians found that 58 percent agree with the underlying reasons for the protest. A little less than half — 46 percent — said they personally identify with the movement.

For now, the toughest challenge may be simply building enough momentum to get through the winter, when protest activities — especially those by campus groups — are generally expected to quiet down.

And for those holdout cities still maintaining camps, the dropping temperatures pose a major obstacle.

Reached by phone earlier this week, Occupy Denver member Jeannie Hartley said she had more immediate concerns than her group’s involvement in the port shutdown day — mainly the roughly 50-75 people, a mix of homeless and activists, she said, who remain outside in record-cold temperatures.

“It’s going to be minus-6 degrees tonight,” Hartley said, “and we’ve got people camping.”