In the Dec. 12 port shutdown campaign, the rank and file are leading organized labor, not the other way around 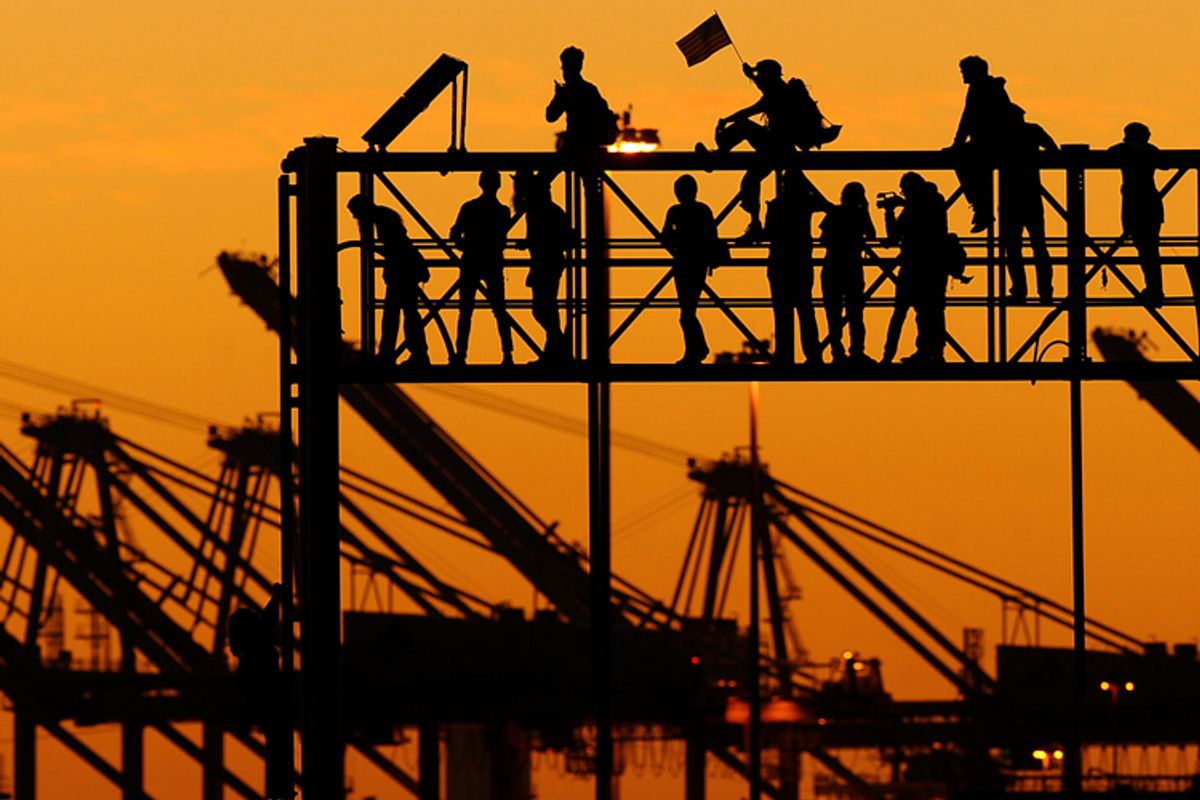 As Occupy Wall Street groups stretching from San Diego to Anchorage mobilize for a multi-port shutdown of the North American West Coast, union members are finding the mobilization offers more than just support against union busting and unfair contracts. Activists and rank-and-file workers say the movement is teaching them what the bureaucratic infrastructure of organized labor has made them forget: collective power.

On Dec. 12, general assemblies (the decentralized governing bodies of OWS) in Los Angeles, Oakland, Calif., Tacoma, Wash., Santa Barbara, Calif., Portland, Ore., Seattle, Longview, Wash., San Diego, Anchorage, California's Port Hueneme region, and dozens of smaller camps plan to blockade ports and halt commerce for a day. There is a combined Dallas-Houston effort to demonstrate at the port in Houston. Japanese rail workers, who are sympathetic to longshoremen, who work a partner company of Bunge -- the company Occupy is protesting -- will be demonstrating in Japan.

Farther inland, Denver will try to shut down a Walmart distribution center. Occupy Bellingham may block coal trains; and landlocked California occupiers will bus to the coast. According to the Journal of Commerce, the “West Coast ports handle more than 50 percent of the U.S. containerized trade, including 70 percent of U.S. imports from Asia.” The demonstration is in solidarity with Longview longshoremen who say their jurisdiction is being threatened by multinational grain exporter EGT, as well as port truckers who have been prevented from unionizing in Los Angeles. (Their little-known plight was exposed by Salon in October.)

The campaign to shut down what some call "the Wall Street of the Waterfront" is consistent with the general Occupy Wall Street message on the distribution of power and wealth. Yet, the effort faces opposition from the union bureaucracy’s upper echelons, precisely because of the conflict with EGT. Last week officials of the International Longshore and Warehouse Union (ILWU ) sent out a memo reminding its members:

“To be clear, the ILWU, the Coast Longshore Division, and Local 21 are not coordinating independently or in conjunction with any self-proclaimed organization or group to shut down any port or terminal, particularly as it relates to our dispute with EGT in Longview." (emphasis added).

So, paradoxically , where labor conflict is starkest, the union leaders reject outside support, and when Occupy Oakland acts to support the union's members, the union itself resists. That's why Dec. 12 looms not just as a test of strength for the Occupy movement. The port shutdown is also shaking up Big Labor.

The idea of a port shutdown was born out of an Occupy L.A. plan to demonstrate in solidarity with local port truckers. L.A.’s intentions exploded into a large-scale mobilization to shut down the ports along the entire coast.

Shrugging off tent removal, tear gas and rubber bullets, Occupy Oakland has become the nucleus of coordination, holding inter-Occupy conference calls; brainstorming budgets to provide camps with everything from porta-potties to bullhorns; and using union networks to connect rank-and-file members with general assemblies on the West Coast.

Hundreds of Oakland citizens are leafletting commuter trains, staging rush-hour banner drops, reaching out to non-unionized workers, and sending out bilingual teams to ethnic boroughs to help populate the blockade. Other local organizations are independently working for the event. For example, the International Socialist Organization immediately began contacting branches in relevant cities while the East Bay Interfaith Committee for Worker Justice will be hosting a pre-march teach-in about the plight of longshoremen and port truckers.

As for the possibility of future police action, the occupiers do not have to speculate. The City of Oakland and the Oakland Police Department will be working together to keep port operations running on Dec. 12. Though Oakland is no stranger to police violence at port shutdowns the police presence may actually help the protesters.

A police blockade, says one union member and shutdown organizer, is enough reason to prevent longshoremen from unloading ships. Though the longshoremen could technically ask the police to escort them across the picket line, historically, they have not done so. Such a standoff would protect the ILWU from litigation and enable it to respect-- as it usually does -- a community picket.

The labor battle in Longview highlights Big Labor's awkward position of resisting a popular movement against corporate power. Longshoremen have been protesting EGT’s decision to contract with another union whose members are paid lower wages than the ILWU’s.

EGT is an export grain facility owned, in part, by agribusiness holding company Bunge Ltd., and has employed ILWU workers on the ports for years. Bunge extracts billions of dollars a year in profits, but has a tarnished international reputation. It was expelled from Argentina this year for accusations of evading taxes. Environmentalists charge Bunge with undermining ecological recovery through intensive sugar cane and soybean-growing in Brazil. It has also resisted South American union demands for workers’ rights.) But in the United States, the company’s name doesn’t make much news outside of stock reports and longshoremen activist sites.

The ILWU's problem is that no-strike clauses in contracts require union leaders to foreswear labor action and distance themselves from independent action. Throughout the protests, including those at the Nov. 2 general strike and shutdown of the Oakland port, most unions did not officially sanction the strike, though they all supported it materially and in marching feet. The president of Local 21 of ILWU, for example, was a keynote speaker of the Nov. 19 march.

But resistance endures at the top of the unions. In a recent meeting, the Alameda County labor council not only refused to endorse the port shutdown, but actually considered a public rejection of the action. The proposal was eventually tabled, but the whole debate was arguably a consequence of the entanglement of big business and labor: specifically, of the labor council’s executive treasurer-secretary and a port commissioner.

“The fear of getting sued that haunts the union leadership is unfortunate,” said Barucha, a young anarchist with Occupy Oakland.

“It’s not our job to rail against union leadership," she said. "We don’t have to come out and criticize union leadership, because we’re leading by example. The occupation movement being able to provide a better framework of getting the rank-and-file working class’s needs met. [It] exposes the recuperation of the union institution by political parties.”

For years, members of certain -- not all -- unions say their bosses have compromised their collective power in back-door agreements and concessions. Some resent the “team concept,” a labor term for the working relationship between union bosses and CEOs, which places efficiency and profits over workers’ needs, according to disgruntled members. There is similar sentiment regarding the unions’ long-standing relationship with the Democratic Party -- an institution also married to big business.

“The Occupy movement struck a chord,” explained Stan Woods, a member of the Transport Workers Solidarity Committee, a multi-union rank-and-file organization made up of ILWU members, teamsters, city train drivers and other similar blue-collars workers. “The union leadership doesn’t want to be left out, but they are hamstrung by their relationship with the Democrats, mayors and other politicians. They’re caught in a quandary.”

Barucha says the democratization paradigm of the leaderless occupation movement is proving to be a model for workers unhappy with the status quo.

“This is the first time there has been an exemplary movement that is encouraging and teaching people to self-organize.” The occupation, she said, allows union members to act as individual community participants and create community pickets, alongside the unemployed, the non-unionized working class, the homeless and any other supportive neighbors that share the same material needs.

One Bay Area couple who belong to another big local union, the United Food and Commercial Workers, said they and some other grocers chose to organize after watching their contracts being written up behind closed doors. The couple, who asked not to be identified, said the UFCW leaders negotiated a pension concession that they could opt out of by accepting other concessions.

“The union and the company decided all of this without employees being aware of it," said one grocer. "They kept sending out sugarcoated letters but never once said, 'Prepare yourself because there’s going to be drastic changes.'"

After attending Occupy Oakland's general strike, they heard socialist and union activist John Reimann speak to the crowd. They approached him and asked for help. Out of their concerns, and those of others who had joined the strike, they formed the Grocery Workers’ 99% Club, a group of UFCW members who “have created a sort of rank and file caucus of members who want to fight to make their union do what it is supposed to do: fight for the members,” said Reimann.

“We’re not trying to break the union,” said the anonymous grocer. “We just want our voice back so we can make decisions about our contracts. That’s what we thought the unions were supposed to be about.”

And that desire is an oft-missed message of the West Coast occupation movement, often overshadowed in media coverage focused on sanitation issues and simplistic debates on violence. The occupation movement is proactive as well as reactive, offering new paradigms that transcend binary choices such as unions vs. corporations, Democrat vs. Republican, and leaders vs. followers. Just as the 1 percent now has to listen to the 99 percent. Big Labor has to listen to the rank and file. Dec. 12 marks a step in the evolution of the movement from a collection of improvised tent-villages to a national network of empowered, community-conscious problem-solvers.