Pick of the week: Gary Oldman hunts a Soviet mole in the grim but mesmerizing "Tinker Tailor Soldier Spy" 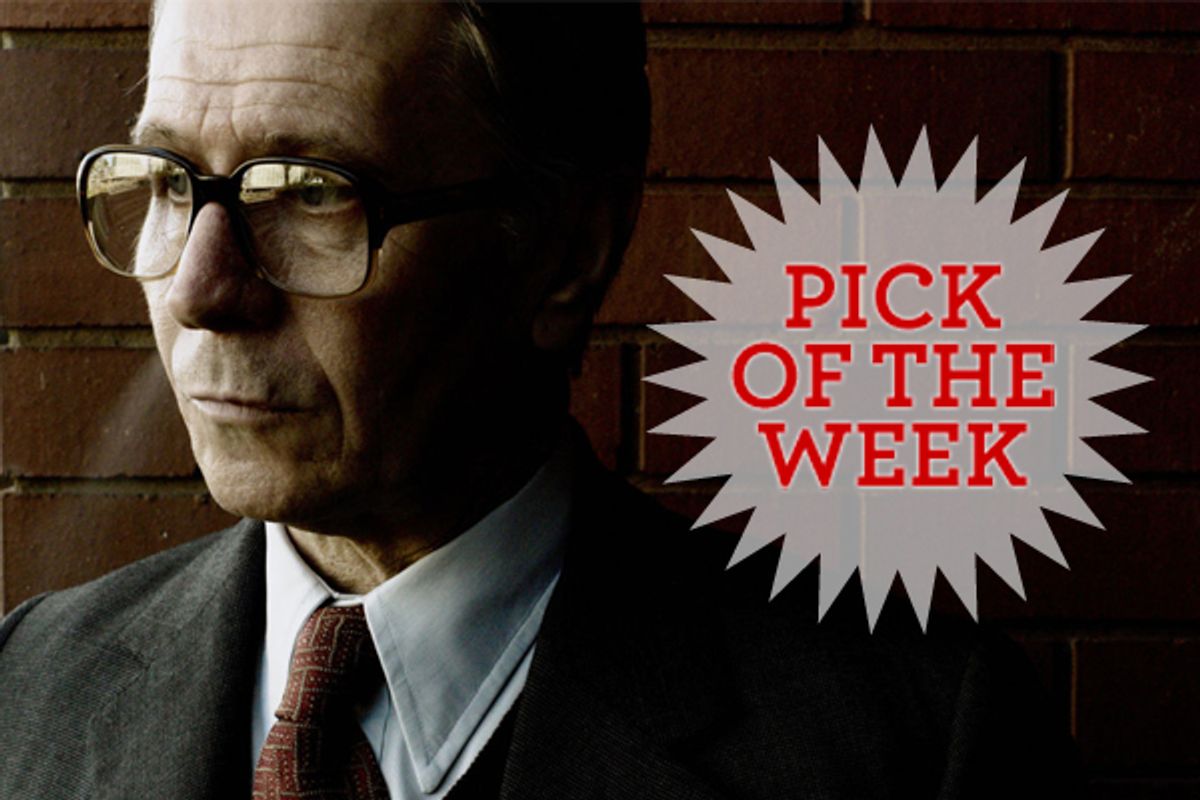 "Tinker Tailor Soldier Spy" takes place long ago in a kingdom far, far away -- the economically depressed and socially divided Britain of the early 1970s, during an especially dank and stagnant portion of the Cold War. Swedish director Tomas Alfredson (who also made the vampire cult hit "Let the Right One In") fills in just enough background detail to let us know that this era is ancestral to our own, showing the back streets of London populated with pot-smoking hippies and multicultural recent immigrants. But the story of John le Carré's legendary espionage novel (adapted here by Bridget O'Connor and Peter Straughan) is largely about a group of aging men who are already out of place in post-swinging, pre-punk London, intelligence officers fighting a clandestine war whose moral coordinates, if it ever had any, have long since become obscured.

What contemporary relevance you may find in Alfredson's chilly, marvelously acted and gorgeously composed new film of "Tinker Tailor Soldier Spy" -- whose widescreen, modernist compositions of lines and angles are by cinematographer Hoyte van Hoytema -- is a highly individual question. (For the record, the novel, like the legendary 1979 BBC miniseries starring Alec Guinness, spells the title with commas; this new movie does not.) For many viewers, it may simply be an exotic period drama that's half nostalgia and half horror-show, recalling the age when the Soviet Union was widely seen as a many-tentacled but obscure monstrosity, working behind the scenes to squeeze the life out of Western democracy. But even though communism per se is long dead (and mourned only by zealots), the movie may be hitting at a moment when the capitalist world faces a crisis of self-doubt every bit as agonizing as that of the '70s.

If you've read le Carré's books or watched the memorably claustrophobic, purposefully baffling miniseries, you're way ahead of the game, and O'Connor and Straughan have reduced the difficulty level by dispensing with some of the most incomprehensible spy-world jargon. If you haven't, a brief primer may be helpful. In "Tinker Tailor," Gary Oldman plays the unflappable and nearly expressionless George Smiley, a senior spy in late middle age who's been but out to pasture at "the Circus" -- Britain's foreign intelligence service, better known as the SIS or MI6 -- after a British agent is shot during a botched mission behind the Iron Curtain. Smiley goes swimming (with his spectacles on) in one of those frigid outdoor ponds the English love, and retires to the sofa with a cup of tea, to watch telly while clad in an impeccable tweed vest. Then the spymasters unexpectedly summon him back, to look into the persistent rumors left behind by his former boss, a boozy, chain-smoking war hero known only as Control (John Hurt): There may be a mole, or Soviet double agent, somewhere near the tip-top of the Circus.

As heroes of spy thrillers go, Smiley is utterly lacking in charisma or sympathetic qualities. If anything, Oldman humanizes the character even less than Alec Guinness did in his mild, owlish late '70s performance; this Smiley makes no small talk, appears to have no friends or lovers and behaves with thoroughgoing ruthlessness in all directions. His only weakness, as he is well aware, is a grave one for a spy: His marriage has gone bad and his wife cheats on him with impunity, but he will apparently forgive her anything. (Unlike in the BBC version, Ann Smiley never appears here as a character, and is only glimpsed in long shots.) Indeed, this version of the story goes right to the edge of making Smiley not heroic at all. He's a man doing a job, and it's not at all clear what he believes about anything. As Smiley observes at one point, the Achilles' heel he discerns in Karla, the mysterious head of "Moscow Centre," is that he's a true believer in the Soviet cause. That suggests, perhaps, that a successful professional hews to no ideology.

Smiley's investigation of the Circus moves both forward and backward in time, through the romantic Istanbul anecdotes of a renegade, roughneck spy named Ricki Tarr (a show-stopping performance by Tom Hardy) and flashbacks to the Control era, including a drunken, hilarious Christmas party that features someone simultaneously dressed as Lenin and Santa Claus leading a chorus of the Soviet national anthem. (They're spies; they've all studied graduate-level Russian; of course they know the words.) It's exactly the kind of brilliant, bravura sequence that justifies translating this clammy fable to the big screen, and in a few seconds it encompasses all the themes -- courage and cynicism and pointlessness and betrayal -- on which le Carré expends thousands of words. As Her Majesty's spooks raise their voices in mocking tribute to the Soviet fatherland (excepting, of course, the one man in the room who isn't joking), Smiley gazes out the window at his wife sucking face with one of his colleagues, who is eagerly pawing her ass.

There are lots of other terrific moments in Alfredson's staging, many of them small. In one scene, Smiley is riding in a crowded car through the countryside with two confederates, after recruiting a retired Special Branch man from his life of retirement beekeeping. One of the man's bees has gotten into the car, and the two other guys spend several seconds trying to swat it or repel it. With no wasted motion, Smiley rolls down his window and watches the bee depart; the common sense and decency (perhaps) in that moment are highly reassuring. Later, Smiley tells his lieutenant, Peter Guillam (Benedict Cumberbatch), about his one and only meeting with Karla in an Indian prison cell, acting it out as if Karla were sitting there, and revealing himself more to us, and to the Russian superspy, than at any other time.

As for the mole, a servant of Karla's who is running a mind-boggling triple game involving a purported top-level secret source at the Soviet embassy in London, it could be the unctuous Scotsman Percy Alleline (Toby Jones), Control's longtime rival who has now taken control of the Circus. But it could also be Bill Haydon (Colin Firth), a schoolboy type with an eye for the ladies and a perpetually injured demeanor, or one-time Eastern-bloc refugee Toby Esterhase (David Dencik), or the suave Roy Bland (Ciarán Hinds), who affects a working-class demeanor. As Smiley figures out, Control had assigned all those men code names drawn from the nursery rhyme of the title, and had reserved one of them for Smiley himself, his most trusted lieutenant. There are limits to the epistemological murk of "Tinker Tailor," and Smiley does not seem to entertain the possibility that he might be the mole without realizing it. (Though he might appreciate Don DeLillo's thriller "The Names," in which something similar occurs.)

Of course I won't tell you who it is, but arguably the whodunit element of "Tinker Tailor" isn't the point. Many viewers will already know, and many more will figure it out before Smiley does. Indeed, what you already know about the movie, if you've read this far, contains a significant clue. Le Carré's novel is partly based on his own experiences working as an SIS agent in the '50s and '60s, when a nest of Soviet moles inside British intelligence (eventually known as the Cambridge Five, although that number is not precise) was revealed. But on a philosophical level, the book is also a tipping point in le Carré's work, reflecting his growing conviction that the Cold War had flattened out any moral distinctions between West and East, reducing both sides to cruelty, torture and cynical games of short-term strategy. As the mole eventually tells Smiley, working for the Russians was an aesthetic choice as much as anything else: "The West has become so very ugly." In the book, he adds that he was motivated by profound anti-American sentiment, a feeling le Carré seems to share that goes unmentioned in the movie.

I don't think John le Carré or much of anyone else laments the demise of Soviet communism, and all the spies of the Circus and the CIA and whatever the KGB now calls itself have kept right on going without it. But the question of whether Western democracy has recovered from its Cold War hangover, from its addiction to secrets and spying and the erosion of both rights and liberties, certainly remains topical. In the end what makes George Smiley seem honorable in spite of all that, as this grim but exciting film moves from Hungary to Turkey to the English countryside to the drafty, horizontal spaces of the Circus to the lonely bourgeois comfort of his Islington home, is his almost doglike loyalty. He remains true to queen and country and the corruption-infested spy service that has cast him out not because of any faith but because it's his nature, and ours. Sticking with the tribe, it's what we do.