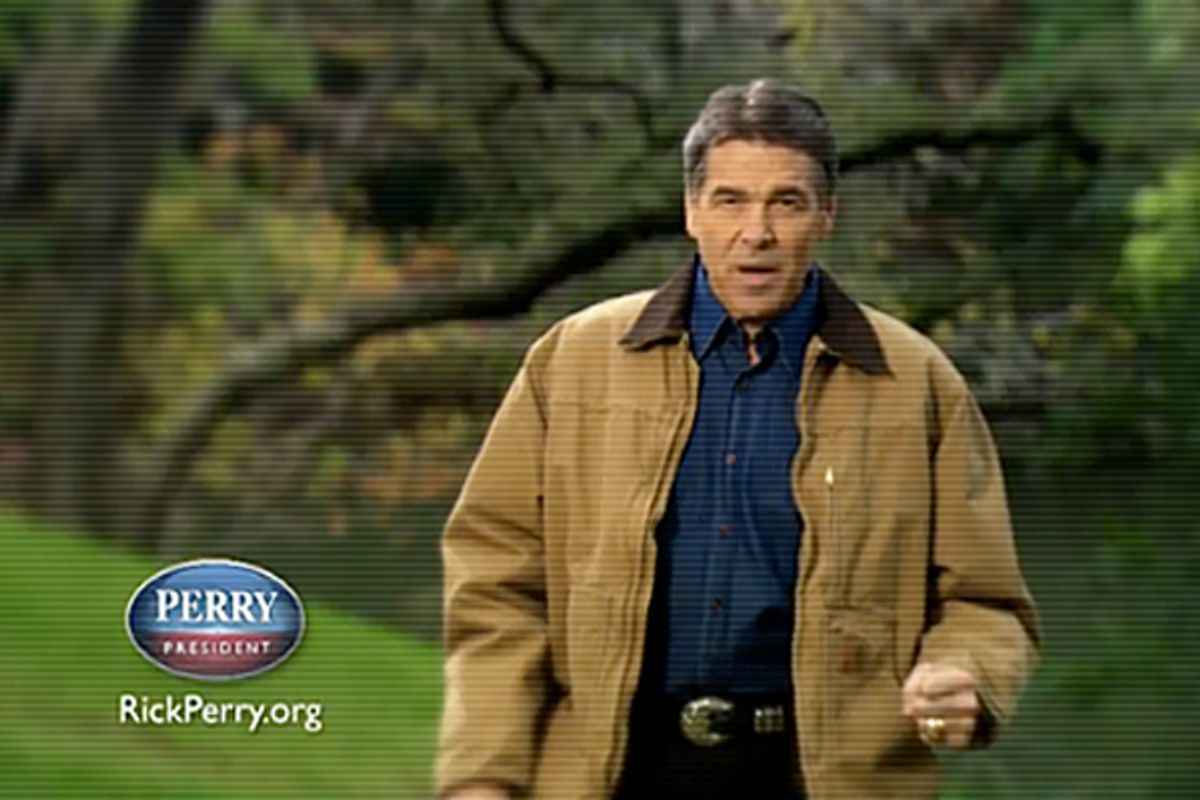 Which FTD Thank You bouquet do you think John Pike sent Rick Perry this week? Did he go for the "Sweet Splendor" or the "Because You're Special"? Maybe he opted for the Hickory Farms sausage and cheese box? He must have done something grand, because who else but Rick Perry could have provided the Internet with the most funny-horrible thing since Pepper Spray Cop?

You've seen the "Strong" video by now. Your friends have posted it all over Facebook, usually with a string of LOLs underneath. In a campaign ad that, unfortunately for Perry, strongly evokes both Heath Ledger's tormented performance and his sartorial leanings in "Brokeback Mountain," the man who uproariously still believes he has a shot at the White House says, "I'm not ashamed to admit that I'm a Christian, but you don't need to be in the pew every Sunday to know there's something wrong in this country when gays can serve openly in the military but our kids can't openly celebrate Christmas or pray in school." He goes on to promise, "As president, I'll end Obama's war on religion. And I'll fight against liberal attacks on our religious heritage." (Perry staffers are already distancing themselves from responsibility, with his top pollster calling the ad "nuts.")

To Perry's credit, he does manage to get through the entire 30 seconds without once losing his train of thought or laughing like he's auditioning to be the villain in the next Muppets movie. Sure, he comes off like a man whose barrel is full of bullet-riddled fish when he declares he's not ashamed to be a Christian. The Republican presidential field is otherwise littered with Muslims, Jews and atheists, I guess.

What Perry can't do, however, is prove his mind makes logical associations – something that's a pretty important qualification for our nation's highest office. Perry's prickly disdain for men and women who are serving their country would, by itself, be hateful and ignorant. But his assertion that there's a "war on religion" interfering with Christmas celebrations? If kids can't openly celebrate Christmas, I hope nobody tells all the tykes waiting to see Santa at the mall. But it's that combination of those two vastly unrelated ideas that really makes the "Strong" clip pure gold. Is Perry somehow suggesting that if we can just push  homosexuals back into the closet, we can then teach how Jesus fought the dinosaurs in the public schools? OK, you gays openly serving in the military! President Perry is going to mind-wipe everyone you've come out to! And then he's going to put a Nativity scene in every classroom! Because that's what the Founding Fathers would have wanted.

Excuse me, I have to go wipe these copious tears of derisive laughter off my cheeks.

It didn't take long for Perry's video – as brilliantly painful a piece of performance art as any of Katie Roiphe's recent Slate columns -- to become a viral sensation. It's racked up nearly 3 million YouTube views. And though the campaign has disabled comments – no doubt in anticipation of a more critical response – on Friday the video was heading toward a half-million "dislikes," a new YouTube record. The newly unseated "dislikes" champion, Rebecca Black, also owes someone an Edible Arrangement today.

Meanwhile, over on Facebook, Perry's official page has drowned in thousands of comments, mostly expressing disdain. "Sure, I'll share it," wrote one woman. "I want EVERYONE to see 'How to sink a campaign in 30 seconds or less.'" My personal favorite is from the person who congratulates Perry "on making Ron Paul the sane one."

Elsewhere on the Internet, the Tumblr of Perry's "unpopular opinions" and a cavalcade of parody videos have sprung up with the inevitability of hairy chests at a bears convention. Second City's Andy Cobb was quick with a look-alike clip, noting that "The gay and atheist presidents didn't get us into the war in Iraq, the financial crisis or turn your mortgage into toilet paper. It took some God-fearing vagina penetrators to do that."

It's likely we can enjoy the dreadfulness of Perry's video – even as it disgusts us – because it's evident his campaign is now as worthless as your 401K. There's a degree of safety in this gasbag's harmlessness, kind of like your racist uncle's Thanksgiving rants. Offensive? Yeah. Effective? Uh, no. Yet even as we point and laugh -- repeatedly -- it's sobering to remember that the sentiments Perry awkwardly expresses aren't just the ramblings of one demented Texan. The guy did manage to get relatively far in American politics with Jesus and homophobia by his side. And though the outpouring of giddy contempt for his incompetence is encouraging, just imagine – had he been a more coherent candidate, that over the top "Strong" ad wouldn't be funny at all.