The slick shtick of Americans Elect 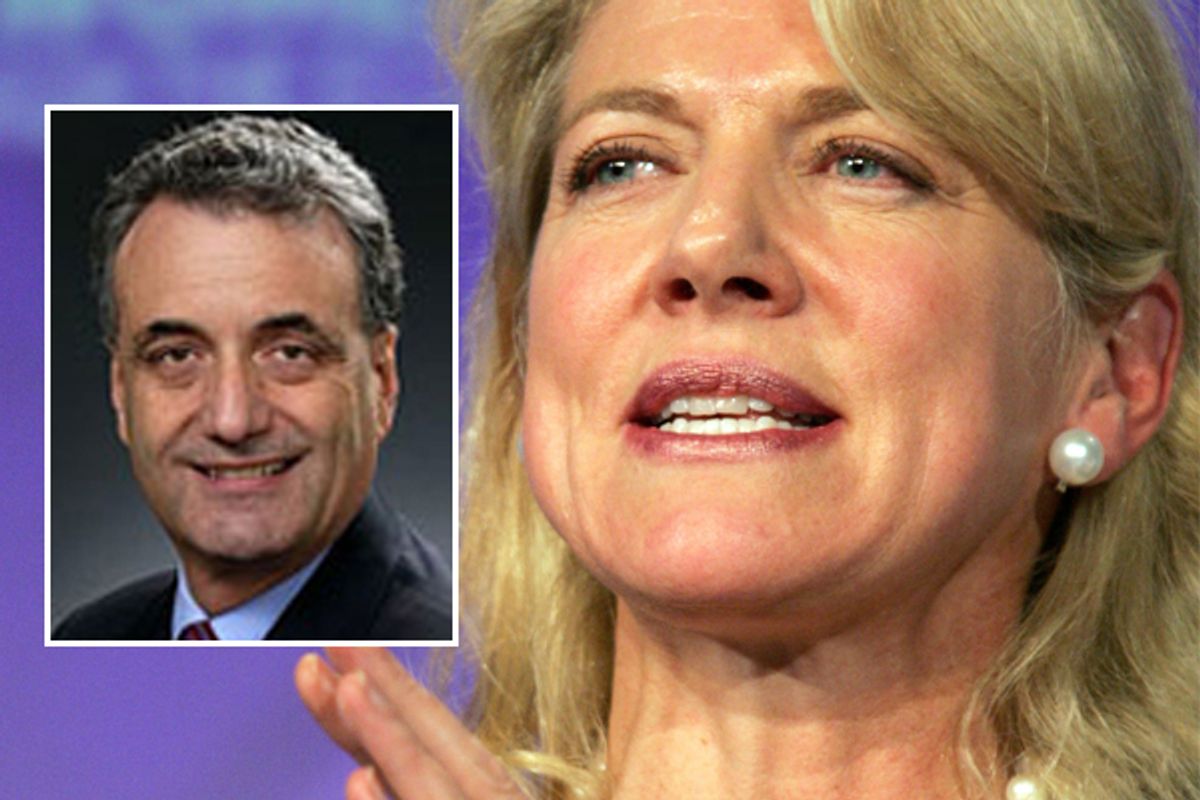 There’s an increasing amount of buzz around Americans Elect, a peculiar Internet-based effort to shake up presidential politics. But dig a bit beneath the surface and there’s reason to be deeply skeptical of the endeavor.

The basic pitch of Americans Elect goes like this: We’ll go through the expensive and time-consuming process of getting ballot access in all 50 states. Then we’ll hold an online convention in June in which any registered voter can participate. Participants will nominate a presidential ticket including one Democrat and one Republican who will then enter the general election fray.

Here’s what the group is not so upfront about: It’s fueled by millions of dollars of secret money, there is a group of wealthy, well-connected board members who have control over Americans Elect's nominating process, and the group has myriad links to Wall Street.

Americans Elect has been getting periodic bursts of support from prominent commentators.

“What Amazon.com did to books, what the blogosphere did to newspapers, what the iPod did to music, what drugstore.com did to pharmacies, Americans Elect plans to do to the two-party duopoly that has dominated American political life — remove the barriers to real competition, flatten the incumbents and let the people in,” wrote Thomas Friedman in July.

And in a Huffington Post column this week titled “2012: The year of the Independent?” Jon Huntsman bundler Lynn Forester de Rothschild hailed the group for offering a “revolutionary new way to nominate a bipartisan ticket to occupy the White House.” Rothschild is also on the group’s board.

There is little doubt that these kinds of hosannas will intensify as the election heats up. Americans Elect's brand of third way-ism tends to be irresistible to newspaper editorial boards. So here are some facts about the group to keep in mind.

The group is hoping to raise $30 million for its effort. It has already raised an impressive $22 million as of last month. So where is all that money coming from? Americans Elect won’t say. In fact, the group changed how it is organized under the tax code last year in order to shield the identity of donors. It is now a 501(c)(4) “social welfare” group whose contributors are not reported publicly.

What we do know about the donors, largely through news reports citing anonymous sources, suggests they are a handful of super-rich Americans who made fortunes in the finance industry. (More on this below.) But it’s impossible to fully assess the donors’ motives and examine their backgrounds and entanglements – important parts of the democratic process – while their identities and the size of their donations remain secret.

In response to critics, Americans Elect official Darry Sragow argues that the donors fear there will be a backlash if their names are public. “Cross those who hold power and you are banished to political Siberia, or targeted not by the Molotov cocktails conjured up by the professor, but by unresponsive or hostile government actions,” he wrote in a recent column.

Americans Elect officials often tout their “revolutionary” online nominating convention, which will be open to any registered voter. But there’s a big catch. Any ticket picked by participants will have to be approved by a Candidate Certification Committee, according to the group’s bylaws.

Among other things this committee will need to certify a “balanced ticket obligation”  -- that the ticket consists of persons who are “responsive to the vast majority of citizens while remaining independent of special interests and the partisan interests of either major political party,” according to the current draft of Americans Elect rules. Making these sorts of assessments is, of course, purely subjective.

And who appoints the members of the Candidate Certification Committee? The board members of Americans Elect. About whom I’ll have more to say in a moment.

“It’s probably headed by wealthy, well-meaning centrists who want to set up an alternative to the two major parties but they’re afraid of the process getting hijacked. So they’ve reserved for themselves the power to overrule it,” says Rick Hasen, a professor at UC Irvine law school and author of a lengthy critique of the group.

In response, Americans Elect’s Sragow has written that some of these rules are still subject to change. And he has defended the board, comparing them to the Founding Fathers. “While we don’t mean to put the board in the company of the Founding Fathers, we’d point out that nobody picked the Founding Fathers, either,” Sragow argues. “They took it upon themselves to turn a popular dream into a shared reality. And they, too, had debates over how much control should be centralized. They knew that too much power in the hands of too few isn’t real democracy, but that power too diffuse is anarchy.”

So who is on the Americans Elect board, and where is the money coming from?

Thomas Friedman reported over the summer that the group is “financed with some serious hedge-fund money,” which has paid for, among other things, prime office space in New York and Washington. A spokeswoman for the group did not respond to a request for comment about Friedman’s report.

At one point over the summer, the group was claiming that none of its funding comes from “special interests” – a difficult-to-define term that, if it has any meaning at all, would have to include the hedge fund industry.

We do know that Peter Ackerman, chairman of the board of Americans Elect, has given over a million dollars to the group. A wealthy investment banker, he has been a donor to both President Obama and Republicans over the years. He was also on the board of the CATO Institute’s Social Security Choice project, which advocated for a Bush-style scheme to dismantle and privatize social security.

According to the Guardian, other funders include Melvin Andrews of Lakeside Capital Partners and Kirk Rostron of an investment firm called the Mt. Vernon Group. Rostron formerly worked as a director at Merrill Lynch’s hedge fund group. Another reported funder is Jim Holbrook, chairman of the Promotion Marketing Association, the trade association for the marketing industry.

And the list of political operatives who have signed on to the effort – including former McCain aide Mark McKinnon, Will Marshall of the Progressive Policy Institute, former New Jersey governor Christine Todd Whitman, and Bloomberg pollster Douglas Schoen  -- suggest the group will promote a kind of pro-establishment, “why can’t we just all get along by agreeing to dismantle Social Security”-style centrism.

The blog Irregular Times has been providing very close coverage of Americans Elect, so keep an eye over there as the group continues its rise to prominence.