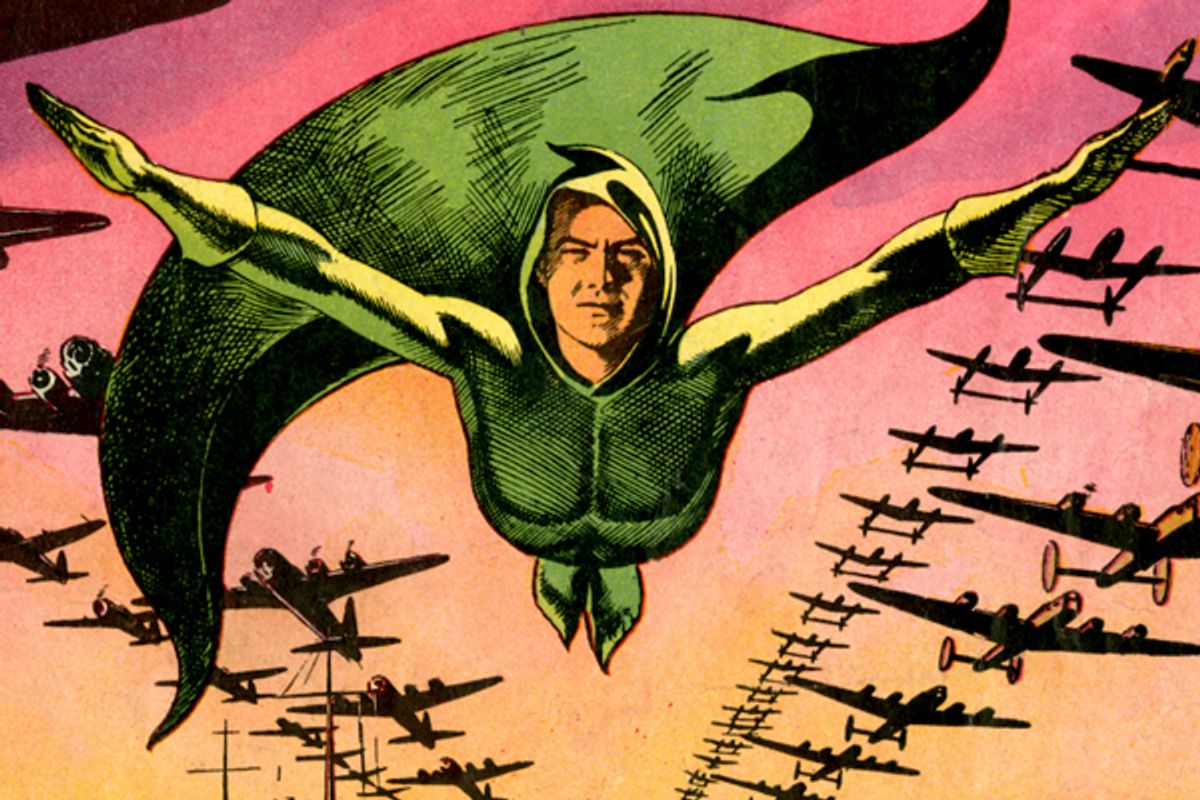 Which Himalayan country has had guest-starring gigs in some of the century's most popular comics? If you guessed Tibet -- a safe choice based on this interview's headline -- you're spot on.

A new exhibition at New York City's Rubin Museum (an institution wholly dedicated to the art of the Himalayas) will show you "the most complete collection of comics related to Tibet ever assembled." A number of them may already be familiar to you; as curator Martin Brauen explained to me this week, popular comic figures like Donald Duck, Lara Croft and Tintin all make appearances. All the comics -- from the obscure and frivolous to the overtly political -- capture Tibet as it has been perceived by artists and readers at different points over the course of past several decades.

Click through the following slideshow for some truly remarkable images from the exhibition.

Why did you decide to do this exhibition now?

Well, soon the movie of "Tintin" is coming out, so it's perfect timing ... But that was not known to me when I planned this exhibition about two years ago. I had actually done a similar exhibition a long time ago [at the Ethnographic Museum of the University of Zurich]; it was a larger one, called "Dreamworld Tibet," made up of all these strange, funny unknown pictures or imaginations regarding Tibet, from novels, Hollywood movies -- and, among other things, also comics. When I came to the Rubin about three years ago, I [decided] to do an exhibition here only about the comics, which makes sense because, as you know, comics are considered nowadays more and more as "art." And since I've chosen about 50 comics related specifically to Tibet, it fits into the Rubin's general subject of Himalayan art.

I like to explore new subjects; I also think very often things like comics are considered as something that should not be represented in a museum. I remember when I applied for a grant for my studies regarding the "Dreamworld Tibet" exhibition, I applied for money from a well-known institution called the Goethe Institute. They wrote me back and said something like: "We are not financing research about trivial culture because the result would also be trivial." That reflects the opinion of quite a number of people. With this, I wanted to show that actually, it's really interesting to go deeper into this subject of comics -- and we can learn a lot.

How did you originally notice that Tibet was such a powerful theme in comic-book literature? Do you think this is something that people who read lots of comics will already be familiar with? Or will it be surprising, even to comic fans?

I think for most people it will be quite a surprise to see so many comics related to Tibet. Most of the visitors might know "Tintin in Tibet" or might know that Lara Croft once went to Tibet to find a so-called "Black Mandala." Some might also know that Dr. Strange was in touch with a guy who stayed in Tibet, and he got a lot of teachings from him. But [the sheer number of] characters from the comic world who have been in Tibet is really quite surprising; there's Mickey Mouse, Donald Duck, Uncle Scrooge, Lara Croft, Dr. Strange, Bugs Bunny -- and even other, less well-known ones ... In the earliest comics we are showing, from 1944 and 1945, the star is the so-called "Green Lama," who seemed to be quite popular in his time. He's now almost forgotten.

Are there any specific stereotypes or generalizations about Tibet we find repeated in these comics?

Since this is an exhibition related to Tibet, of course the stereotypes relate to Tibet. But if you study comics related to somewhere else -- Africa, maybe -- I'm sure you'll find similar stereotypes related to that country. For Africa, "Tintin in Congo" is a good example; it's often criticized [for being] racist. Whereas "Tintin in Tibet" doesn't contain any racism. But you do find some sorts of stereotypes: For instance, the "levitating monk" appears in "Tintin" as well as many other comics, and also of course this creation of the Yeti, the abominable snowman.

I realized when I went deeper into these comics that certain personalities have influenced our view of Tibet quite strongly, although most of us are not aware of it. For example, early missionaries were fascinated with all the pomp and grandeur of Tibetan Buddhism; they compared it with Christianity, with Catholicism, and they felt that there must be some relationship between the religions. Because of that, I think -- although I can't prove it -- that the missionaries were quite in favor of Tibetan Buddhism ... They were fascinated by the Dalai Lama, whom they compared with the pope; they were fascinated by the Potala, the winter residence of the Dalai Lamas -- and all this you can find in comics and in novels and in Hollywood movies about Tibet. What appears again and again is this hierarchy, with the Dalai Lamas on top, and then below, some monks and other normal people.

Another person who influenced our notion of Tibet very much was a half-Russian lady called Helena Blavatsky. She was the founder of the Theosophical Society, and she had quite weird ideas about Tibet (for instance, she claimed she had been in Tibet, which is quite clearly not true). She said she had telepathic relationships with two so-called Mahatmas -- sages living in Tibet -- and and that they would tell her what to do. Interestingly, these two Mahatmas were not Tibetans, but were Indians of Aryan origin. This is a subject that comes up in many comics again: a superhero or a "lama" who is very powerful, but in most cases -- actually in all cases -- is not Tibetan but white.

For example there's a novel by James Hilton called "Lost Horizon"; it was a bestseller that sold many many millions of copies in the 1930s, '40s and '50s. Hilton invented the idea of Shangri-La, this place somewhere in Tibet where a sort of brotherhood resides. This idea is taken up in some of the comics. But this brotherhood is again full of white people -- no Tibetans.

In general, as long as you don't think "This is actually Tibet," it's fun! These are fairy tales; they're entertaining, but a lot of things which are depicted are, of course, wrong.

For Westerners, what is the connection between the supernatural and the East?

It's a good question, because Westerners have a way of seeing Tibetan events as somehow special or magical. For example, these "levitating monks," or monks who can appear and disappear. Now, this is not only a Western notion; that's the interesting part of the whole thing -- because if you go to Tibet and if you read the stories, you very often read lot of these things there, too ... I would compare quite a number of these comics to fairy tales -- I mean, in fairy tales you find similar things: miraculous activities, miraculous events, etc. But in this case, sometimes they are taken from Tibetan stories.

The exhibition also contains some biographical comics; one particular one is about a Tibetan saint called Milarepa. Milarepa, for Tibetans, is known as a very magical person, who can do things normal people can't do; this is depicted in the two comics we are showing in the exhibition. In the show, we juxtapose traditional Tibetan paintings of Milarepa ... with examples of how Dutch comic art has depicted the same scenes, so you can compare the Tibetan way -- the traditional way of depicting the saint's life -- and with the ways Dutch comic art has depicted the saint.

"Hero, Villain, Yeti: Tibet in Comics" is on display at the Rubin Museum of Art in New York City through June 11, 2012.