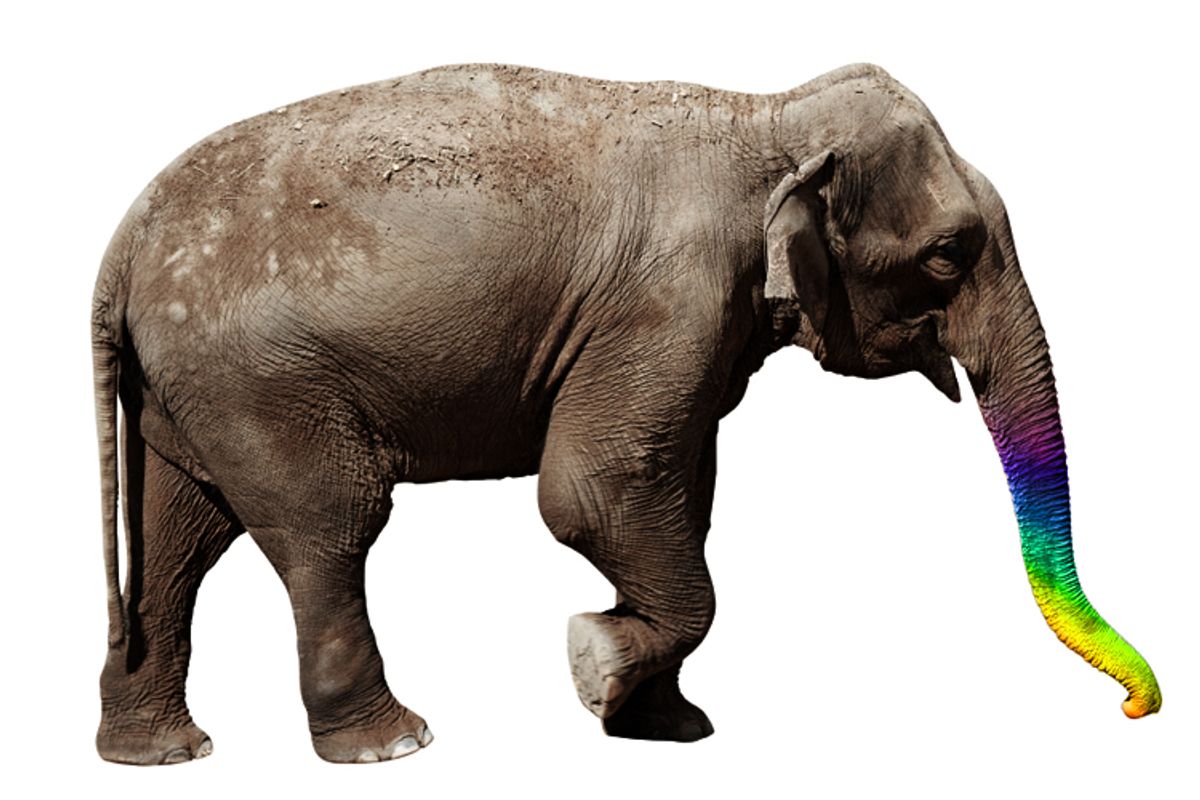 This week conservatives got all hot and bothered over bestiality – which they condemn, of course, but just can't stop talking about.

Last week, the Senate voted to repeal an archaic military ban on sodomy that happens to also reference sex with animals. Article 125 of the Uniform Code of Military Justice holds that a service member who "engages in unnatural carnal copulation with another person of the same sex or opposite sex or with an animal is guilty of sodomy." This bit of legal housekeeping helps to put military law more in line with both the repeal of "don't ask, don't tell" and this little thing called the Constitution. But right-wingers were quick to announce that the repeal of Article 125 meant bestiality was being legalized in the military.

I'm sure you will be shocked to learn that that is not actually the case, that the military is not paving the way, intentionally or otherwise, for free love between humans and our furry, feathered or scaled friends. In response to this extremist hysteria, the military issued a statement clarifying that animal abuse laws and conduct rules still prohibit bestiality; there will be no monkey business, so to speak, allowed in the barracks. A WorldNetDaily reporter even introduced a question about  a White House press conference. Make no mistake, though: This is not about sex with animals. There are many states without an explicit anti-bestiality law on the books, and the conservatives aren't gathering en force to change that, are they?

What this is really about is homosexuality. "It started by toppling the barrier to open homosexuality," said a blog post from the Family Research Council. "And it continues with an assault on marriage and religious freedom. Now, in its rush to accommodate the Left, Congress may have inadvertently opened the door to even more perversion." The FRC's post, which reads like a parody, continued: "In its haste to make gay sex an official part of military life, the Left could be unintentionally repealing the ban on bestiality too." Linking homosexuality to bestiality is nothing new for this breed of conservative. The most infamous example of this is the Google-plagued Rick Santorum: In a 2003 Associated Press interview, he explained that the definition of marriage does not include same-sex unions, just as "it's not, you know, man on child, man on dog, or whatever the case may be."

Former presidential hopeful Mike Huckabee seemed to equate homosexuality and bestiality when he told Beliefnet in 2008: "I think the radical view is to say that we're going to change the definition of marriage so that it can mean two men, two women, a man and three women, a man and a child, a man and animal." In 2009, Rep. Louie Gohmert spoke on the House floor against a hate crimes amendment to a defense bill: "We made amendments … because we could see that the definition of, uh, um, sexual orientation is wide open to all kinds of interpretations, and some day, some court somewhere will say, 'You know what, sexual orientation means exactly what these words mean … if you're oriented toward animals, bestiality, then that's not something that can be held against you.'" (He went on to lump in necrophilia and pedophilia too.) There are plenty of other examples from conserva-characters like Rev. Jerry Falwell.

So why are social conservatives so quick to link bestiality to homosexuality? Well, the generous interpretation is that someone just needs to alert them that gay bears are not actual bears. More realistically, though, this bizarre association can be traced all the way back to the side-by-side condemnation in Leviticus of sex both between two men and between a man and an animal. A key connection here is that both are forms of non-procreative sex. A concern over reproduction, the growth of a tribe, was much more understandable in biblical times, and yet modern-day wing-nuts still subscribe to the belief that heterosexual, conjugal and procreative sex is the only acceptable kind. Anything outside of that rigid category is considered deviant, which is why homosexuality is grouped together with everything from pedophilia to necrophilia. They are all part of what presidential candidate Michele Bachmann referred to as "sexual anarchy."

The "homo-bestiality" mentality fundamentally represents a fear of desire, indulgence and the irrepressible. The loss of control that is inherent to sex scares most, if not all, of us -- but it's the Huckabees and Bachmanns of the world who seem most terrified. That really only confirms, once again, that conservatives are the freakiest of us all.