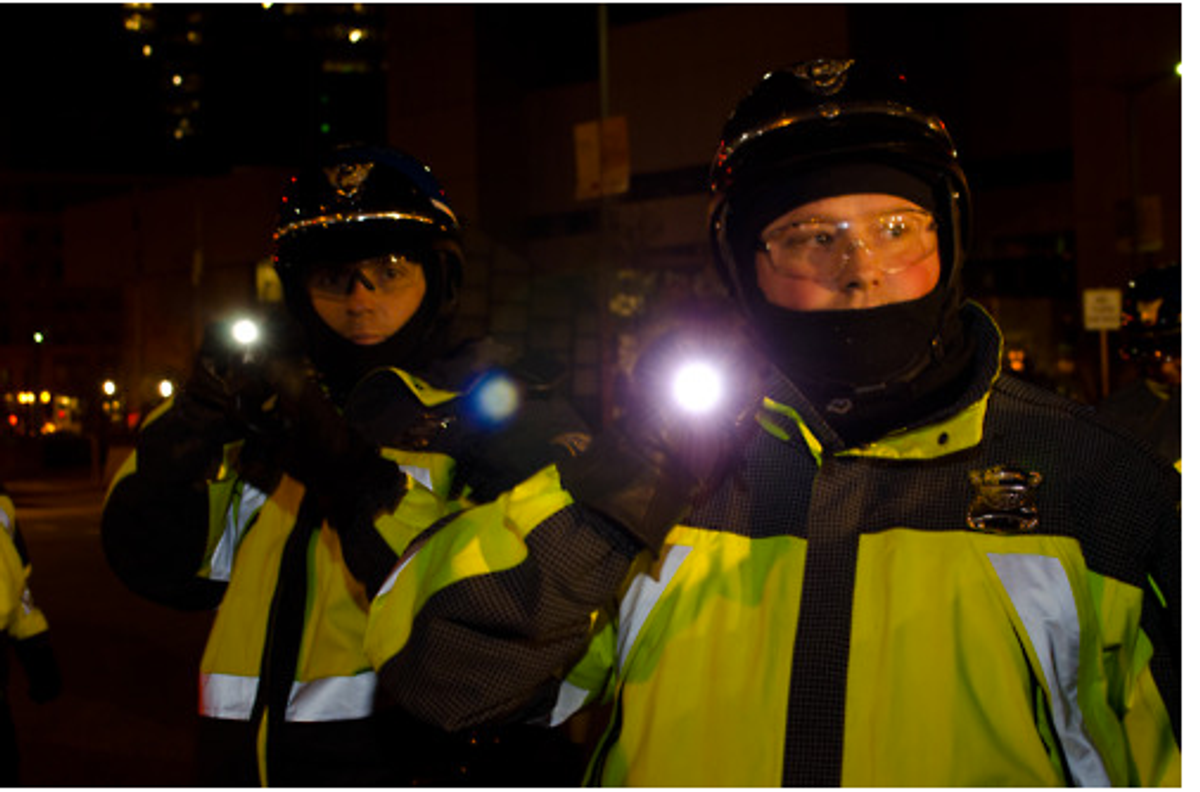 The longest-standing occupation camp in the country folded early this morning when Boston cops pounced in the wee hours, arresting at least three dozen protesters on trespassing charges.

Half of the 300-strong group of on-site and off-site occupiers had struck camp voluntarily 24 hours before when a Boston Superior Court judge lifted a restraining order on the police from closing down the 10-week-old campsite that formed days after protesters in New York had occupied Zuccotti Park off Wall Street.

More than three dozen who remained were arrested this morning, according to Boston Police spokeswoman Elaine Driscoll.

Both internally and in the face it shows to the world, the occupation movement has now reached an inflection point. In the frozen mud of the Dewey Square camp, just outside of the gleaming tower of the Federal Reserve Bank of Boston, the protesters had been hugging and congratulating themselves for hanging in there as the hardcore, even while sorely disappointed that others had decamped so obediently after asking Boston Superior Court Judge Frances MacIntyre what was to be done in the event of mass arrests. Her restraining order  was lifted 25 hours before the police swooped in. Essentially, the judge agreed that America is not like England, where squatters' rights are enshrined in law. America is a country where the SWAT teams swoop in on peaceful protesters in public parks.

A squad of paddy wagons rolled down along Boston’s Waterfront just before 5 a.m., and riot police using plastic handcuffs took several dozen sleepy campers alighting from their tents for their rudest awakening since 141 were arrested in early October in Boston.  “If you don’t leave the park, you will be subject to arrest. You are trespassing,” a police officer said through a megaphone.

“They wanted to get arrested. It went very well, and we’re very happy with this operation,” said Superintendent William Evans, an official even protesters admired for his gentle hand in carrying out Mayor Thomas Menino’s orders.

The camp was clearly divided between those who were happy about going into  court to seek a restraining order against eviction and those who questioned the wisdom of seeking change through established channels. Dressed in a tartan green kilt, 48-year-old Phil O’Connell nearly came to blows with several of his fellow occupiers, complaining about “the whole fascist attitude of the general assembly where anyone who shows any passion here is seen as violent,” before cooler heads prevailed.

Another activist calling himself Duncan nearly taunted the police, vowing to “defend this camp to the final moment.” He spoke passionately about what was clearly the beginning of the end, some 19 hours after the Boston Police had distributed fliers putting them on notice that they were in violation of public trespass laws. “Our camp is the best opportunity for us to be the change we want to see in the world. That’s why I was dismayed to see part of our camp voluntarily dismantled last night.”

“Look around," said Brian Kwoba, a 24-year-old occupier from Cambridge.  “It looks like a raid happened, but there was no raid. The mayor flinched at us and we punched ourselves in the face. Do we have a movement where the mayor says jump and we ask, ‘How high?’

No. We have a movement now divided about the wisdom of holding public space in the face of police action.