The Rock and Roll Hall of Fame's women problem 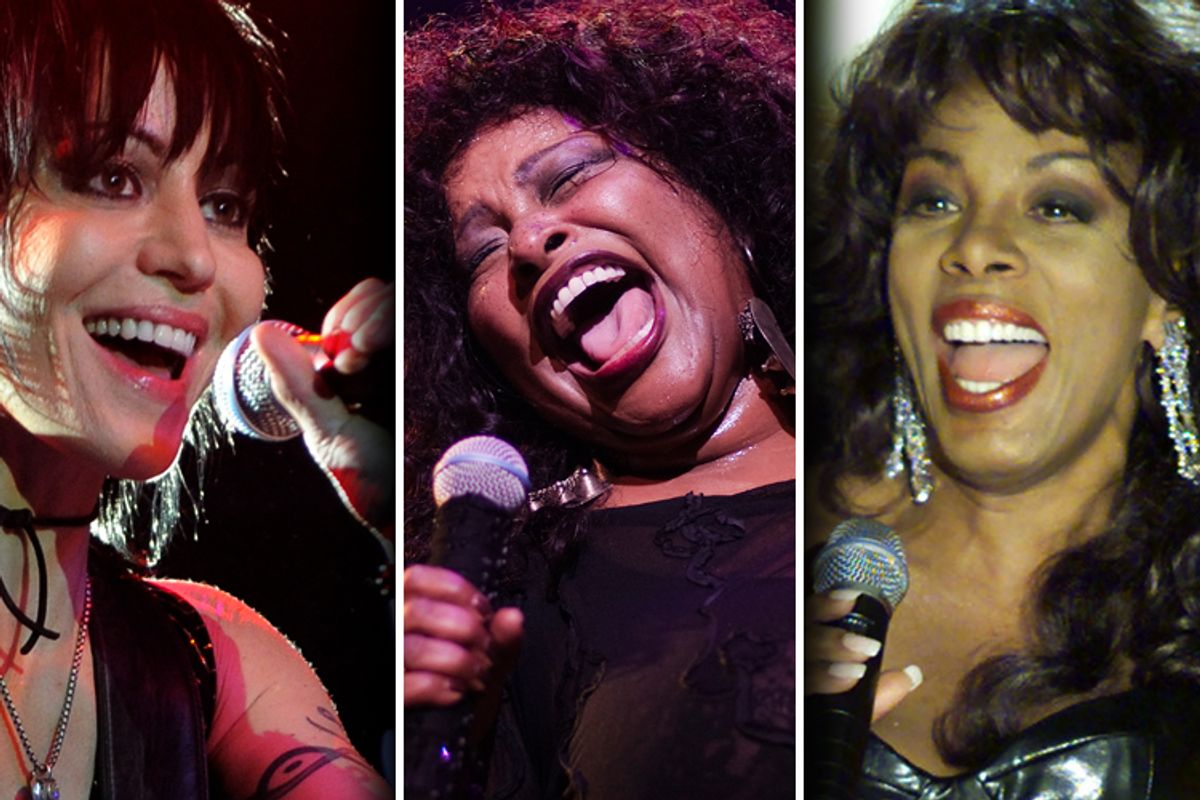 Do the math: Out of the 11 new members of the Rock and Roll Hall of Fame class of 2012, one -- Laura Nyro -- is a woman. Include all the musicians in each of the newly anointed bands, and you’ll still find only one woman (still Nyro) and 21 men. In the 27 years since the Hall was founded, there have been 296 inductees, including bands, pioneers, producers and promoters. Forty have been women or had female members.

Do women really only account for less than 14 percent of rock history?

Not only do fewer women get picked for the Cleveland-based institution, it takes longer for them to get in. The late, great Nyro, a brilliant singer-songwriter whose career spanned rock, folk, jazz and soul, was nominated 19 years after she first became eligible. (Acts are eligible for nomination 25 years after their first recording.) The Beastie Boys, her co-inductees, were enshrined only four years after eligibility.

Apparently, beneath the marquee announcing the Rock and Roll Hall of Fame and Museum’s current exhibit -- “Women Who Rock: Vision, Power, Passion” -- should be a hand-lettered sign for the secret entrance to the fort of fame: “No girls allowed.”

To get into the Rock Hall, you have to know the password, the handshake and, maybe, Rolling Stone publisher Jann Wenner’s cellphone number. The selections are not obvious, and while there is clearly a history of sexism, it doesn’t necessarily follow the usual patterns. For instance, Madonna -- a dance-driven artist oft ridiculed by rockist pigs -- was chosen in 2008, the first year she was eligible. The Stooges -- the proto-punk legends as beloved by critics as they are hated by the humorless -- were granted entree two years after the Material Girl, 41 years after their first album. (In a marvelous demonstration of grace and chutzpah, Madonna had the Stooges perform her songs at her induction ceremony.)

It’s hard to figure the Rock Hall out. The anonymous nominating board (“rock and roll historians,’’ according to the RRHF website) and voting board (some 500-plus “rock experts”) makes some unexpected and impeccably tasteful choices (LaVern Baker, Cosimo Matassa). And then there are some real bonehead picks, like this year’s headline-grabbers, Guns N' Roses and Red Hot Chili Peppers, two cheesy and derivative bands who have influenced no one of importance and have contributed infinitesimally to the great American songbook. (When karaoke dies, so will “Sweet Child O’ Mine.”)

Maybe the women split the vote. At a conference in Los Angeles earlier this year, an executive for the Cleveland museum admitted that females are underrepresented among the voters. In other words, Wenner, who co-founded the hall with a bunch of other men (and one woman) and has remained its most prominent figure, has modeled the organization after his flagship magazine, Rolling Stone. There, too, the decades-long dearth of women on the masthead is mirrored in the rare and token coverage of female artists. (Wenner, by the way, was inducted into the RRHF in 2004.)

“The Hall of Fame is truly a (white) boys' club, always was and still is,” says one veteran rock expert and former Wenner employee. “It very much reflects the attitude I found at Rolling Stone on staff in the early days ('60s and '70s), given what we covered and who was allowed to write and edit.”

Considering the snub of Jett and Heart, two acts that topped the charts with their guitar-based hard anthems, the Hall seems to have an aversion to (fear of?) women who rock -- women who know what to do with that ax between their legs. As Silver, a New York-based Riot Grrrl musician sang in a ‘90s composition, “Rock girls don’t make it, pop girls always do.”

At this juncture, I think I should point out again the name of one of the current exhibits in Cleveland: “Women Who Rock.” Isn’t that ironic? The aforementioned Wenner survivor points out that the museum attached to the Hall of Fame has a much better track record of including women than the Hall itself. “The museum is a lot more open to women's history than the Hall of Fame is. There have been really terrific conferences and exhibits there, and publications coming out of both.”

Nonetheless, the herding of all musicians with vulvas into one generalizing exhibit/issue is a classic Rolling Stone maneuver. In 1997, I interviewed Jett and Queen Latifah for a “Women of Rock” issue of Rolling Stone. (Yes, I have been employed by Wenner Media -- but only as a freelancer.) I had a bunch of burning questions I was dying to ask the queens of noise and hip-hop. Instead, the magazine insisted all interviewers ask questions from an editorially approved list, because apparently we (and for this issue, an unusual number of female bylines were deployed) weren’t capable of thinking for ourselves. I was told to direct to Jett and Latifah such urgent queries as “What’s your footwear of choice?” and “What kind of perfume do you wear?”

I bet GNR’s Axl Rose and RHCP’s Anthony Kiedis have worn more cologne in their lives than Jett has doffed eau de toilette -- and that Wenner’s minions have never asked them about it.

Let’s do a simple comparison:

Guns N’ Roses: Two notable albums that I thought recycled Led Zeppelin, Aerosmith and Rolling Stones riffs but that admittedly sold gangbusters, and people I respect actually dig them. Two songs we can’t get rid of, yet: “Sweet Child O’ Mine” and “Welcome to the Jungle.” Stupid, awful lyrics. (What dumb hick moves to the city and is offended by gays and immigrants? Dude, they’re what you leave the small town for!) Then a quick devolution into comic acrimony, drug abuse, bloat, critic-baiting and other outsize rock-star cliches.

Joan Jett: Led one of the first all-girl aggressive rock bands, the Runaways, who have had two movies made about them but have never been nominated to the Rock Hall. Had a string of hits throughout the 1980s, from “I Love Rock ’n ’Roll” to “Crimson and Clover” to “I Hate Myself for Loving You.” Co-wrote and performed one of the greatest rebel rock songs of all time, “Bad Reputation.” Became a model, mentor and producer for 1990s female rock bands. Still tours constantly not as a pathetic parody of her old self, most recently gigging with the Foo Fighters at Madison Square Garden.

What Guns N' Roses have that Joan Jett doesn’t is headline appeal. A reunion of the original GNR members is news (though I’d prefer a Runaways reunion). It sells. It will make issues of Rolling Stone fly off the stands if Wenner gets the exclusive story. It will draw lots of eyeballs to the HBO telecast of the induction ceremony, the raison d’etre of the Hall of Fame.

Ultimately, the Rock Hall is about money, not history. That’s why Madonna and Axl fit right in, and Iggy Pop and Joan Jett don’t. And that’s also why the exclusion of women matters. Women could just follow Johnny Rotten’s lead and say, “Fuck your club, we don’t care if we get in or not.” But being selected pumps up record sales, as a recent New York Times article noted. And getting paid is a feminist issue.

The injustices and omissions of the Rock Hall are legion: No Joan Baez, Patti LaBelle, Slits, Suzi Quatro or Salt-N-Pepa. Tina Turner was picked along with her abusive ex, Ike, not as an artist in her own right. Ditto for Carole King and her sometime songwriting partner Gerry Goffin.

They all love rock ’n’ roll. Why doesn’t the Rock and Roll Hall of Fame love them?

Evelyn McDonnell has written about music and culture for many publications, including the L.A. Times, the Village Voice, The New York Times and Rolling Stone. Her L.A. Weekly article on Runaways drummer Sandy West is included in the new anthology "Best Music Writing 2011." She teaches journalism and new media at Loyola Marymount University.