TV and the novel: A match made in heaven 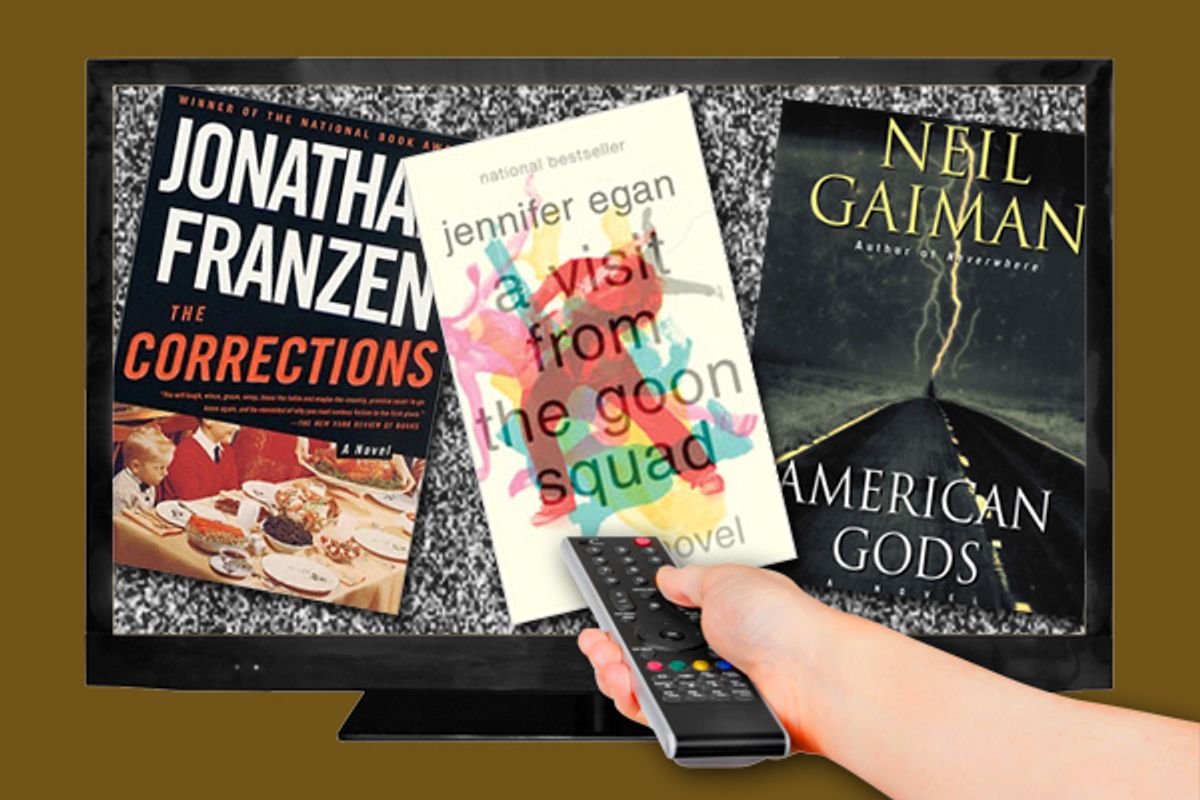 (tarasov and Olga Popova via Shutterstock)
--

The news last week that HBO had optioned the works of William Faulkner for adaptation by "Deadwood" creator David Milch was treated in some press reports as incongruous. It shouldn't have been. The mindless take on "Deadwood" is that it had a lot of swearing in it (which it did, but so what? -- get over it, for cryin' out loud!), yet viewers not mesmerized by the four-letter words noticed the Shakespearean and King Jamesian cadences of Milch's dialogue from the start. Those influences are evident in Faulkner's fiction, as well. (Also, let's not forget we're talking about a man who wrote a novel in which a woman is raped with a corncob -- this isn't Merchant-Ivory territory.) Milch and Faulkner is, in fact, an inspired pairing.

The Faulkner acquisition is only the latest prize in a literary shopping spree for HBO and other television companies. The premium cable network is currently at work on adaptations of Jonathan Franzen's "The Corrections," Jennifer Egan's "A Visit From the Goon Squad, and Neil Gaiman's "American Gods," in addition to its ongoing series based on the novels of George R.R. Martin ("Game of Thrones") and Charlaine Harris ("True Blood"). Fox will be turning Lev Grossman's "The Magicians" into an hour-long dramatic series, as well, and Salman Rushdie is at work on an original show, "Next People," for Showtime. The novel and television are commingling as never before. And it's about time.

Television and the novel, while not exactly soul mates, have a lot more in common than the novel and theatrical film. Yet any novelist can testify that the second most common question he or she hears from readers (after "Where do you get your ideas?") is "Who would you like to see playing [main character] in the movie?" Fantasizing about the film version of a favorite book seems to be very common, but you have to wonder why. Rarely are a book's most devoted admirers satisfied by the film, although when they are -- as with the Harry Potter, "Twilight" and "The Lord of the Rings" franchises -- popular enthusiasm can certainly be enormous.

Far more often, however, the results are disappointing -- let the recent adaptation of Kazuo Ishiguro's "Never Let Me Go" stand as a case in point. Much of a novel has to be cut to fit a 90- to 120-minute dramatization, and this can mean more than just the loss of supporting characters or scenes. Most movies conform to a three-act structure (some screenwriters will insist that it's actually a four-act structure), a form with a proven ability to hold audiences' interest through a single viewing. Novels, meant to be read over multiple sittings, have more freedom. Trimming a novel like "Bleak House" to fit the three-act format alters the fundamental shape of the work, often subtracting from the novel the very roominess and complication that made you love it in the first place.

A television series, however, has the time to spread out and explore the byways and textures of a novel's imagined world. Furthermore, while theatrical film is a medium in which the director reigns, in television, as Rushdie told the Observer, "the writer is the primary creative artist. You have control in a way that you never have in the cinema. 'The Sopranos' was David Chase, 'The West Wing' was Aaron Sorkin." Although television is, like film, a photographic medium, it need not rely as heavily on visual storytelling or gifted but capricious actors to fill in its nuances. Buffy Summers is a memorable character, replete with layers and contradictions, largely because she was written that way -- as the undistinguished post-"Buffy" career of actress Sarah Michelle Gellar illustrates.

Nevertheless, apart from a brief miniseries boom in the 1970s and '80s ("Rich Man, Poor Man," "Shogun"), the mass-market imperatives of broadcast television kept it and the novel apart until the advent of cable. Literary people wrote off TV as a "vast wasteland" -- a fair cop, it must be said -- with occasional oases like "Twin Peaks," the groundbreaking serial drama created by the eccentric film auteur David Lynch. After one thrilling season, Lynch's relationship with ABC went south, and so did the show, cementing the notion that the medium itself (rather than the broadcast network system) militated against quality and originality.

A network like HBO, however, doesn't need to attract large audiences; rather, it aims to persuade a much smaller population of subscribers that it's worth paying a little extra every month to see better programming. With "The Sopranos," HBO ushered in the idea that serialized drama can aspire to an excellence (particularly in writing and performance) comparable to that of film, and with "The Wire," critics got in the habit of comparing such series to novels. The fact that established crime novelists like Richard Price and George Pelecanos wrote for "The Wire" surely fostered that notion. Other cable networks expanded the possibilities of the genre with such serial dramas as "Breaking Bad" and "Mad Men."

The influence moves both ways; Egan has said that "The Sopranos" was one inspiration for "A Visit From the Goon Squad." The novelist Mark Danielewski ("House of Leaves") recently signed a $1 million contract with Pantheon Books for a serial novel, "The Familiar," to be published in 27 volumes, with a new book appearing at four-month intervals. Although this naturally reminded quite a few observers of Charles Dickens, who published his novels in serialized installments, when interviewed by the Los Angeles Times, Danielewski said that he's thinking in terms of five-book "seasons," citing the television model.

A peculiar twist to these developments is that a novel that must be cut to accommodate a movie-length running time may still be too short to fill a 13-hour season and beyond. Some novelists are now writing additional material based on their supposedly finished works. Gaiman, who recently published an "author's cut" (with 12,000 more words) of "American Gods" on the 10th anniversary of that novel's publication, told an audience at the Edinburgh International Book Festival that he's writing a sequel and two spinoff stories, as well as at least two episodes of the series itself.

"American Gods" -- which recounts the adventures of assorted deposed pagan deities reduced to working regular jobs in the New World -- lends itself well to such add-ons. (Gaiman's 2005 novel, "Anansi Boys," is an "American Gods" satellite.) The boundaries of a novel like "The Corrections," by contrast, seem less porous, yet Franzen recently told New York magazine that he was plumping up "The Corrections" for the HBO adaptation: "Minor characters in the book are becoming very substantial characters in the show, too. It's fun. I'm coming back to the book as a stranger, essentially 12 years after I wrote it, and I'm filling in blanks that were deliberately blanks, but I'm having the pleasure of filling them in."

No doubt the print edition of "The Corrections" will remain the canonical version of the novel, but if the additional material is written by Franzen himself, albeit for television, it will have a status that someone else's adaptation will not. Are the previously undescribed histories of the fictional characters in "The Corrections" actually part of "The Corrections," even if they don't appear in the text version of the novel? Will the series end where the book does, or will the narrative continue? If so, for how long, and who will write it?

A definitive ending is one thing that serialized dramas don't promise. (The agonies of "Deadwood" fans denied such an ending are legendary.) When it comes to literary adaptations, this may be a miscalculation. America's top-drawer television producers ought to take note of their British counterparts and apply their newly elevated standards to reviving the fine art of the miniseries. After all, even Dickens knew when to call it a day.

Neil Gaiman describes his work on the HBO series "American Gods" at the Edinburgh International Book Festival, as reported by the Guardian newspaper