How Boeing got away with breaking the law 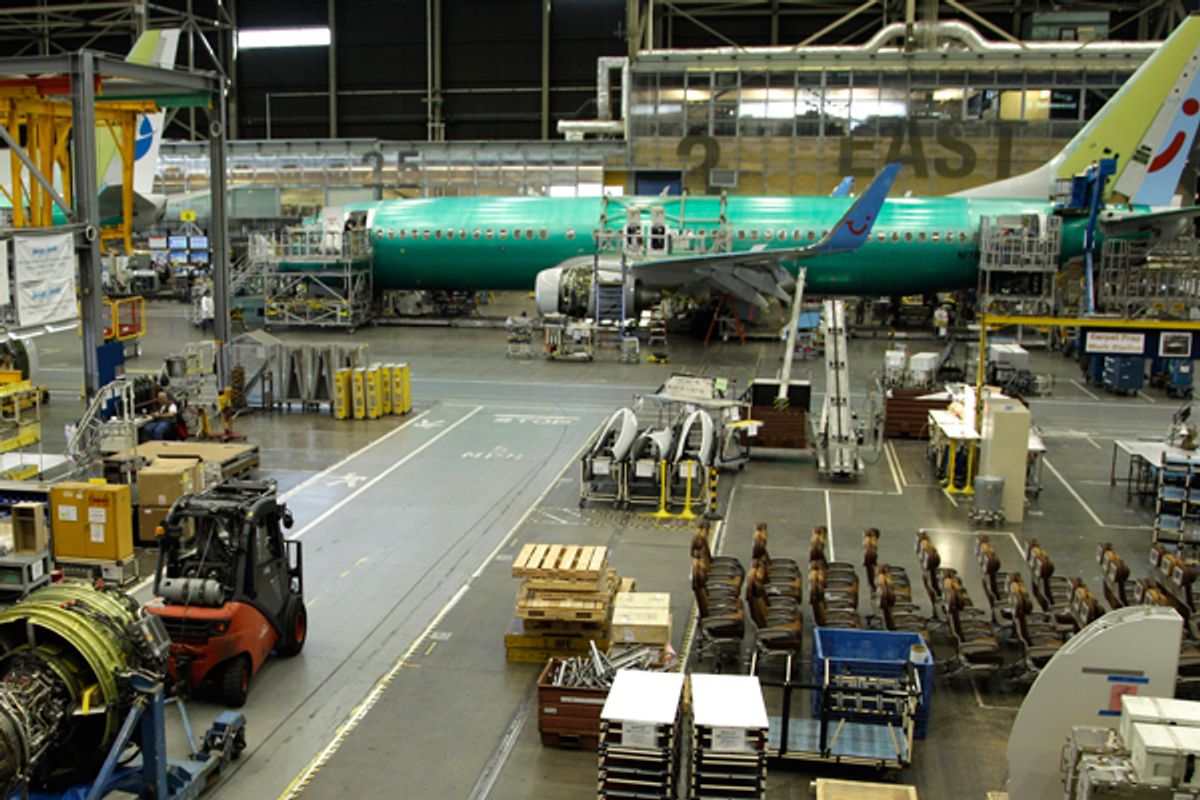 Republicans won’t have the National Labor Relations Board's case against Boeing to kick around anymore – though no doubt they’ll keep flogging its corpse. On Friday, the NLRB announced it was dropping its most famous investigation in years. The union that had brought the case, the International Association of Machinists, asked the NLRB to relent following a compromise reached with management. The IAM is touting its deal as a better alternative than pursuing the NLRB case. They’re right – which is a damning measure of how poorly the Obama administration defends workers’ human rights.

At a time of high unemployment and stagnating wages, the Boeing case shows why it is so hard for workers to collect a larger share of national income. It highlights Republicans' resolute defense of law-breaking big business, and President Obama's lack of equivalent fire in defense of the 99 percent. Obama expresses sympathy for the occupation movement But in a case where he might have actually done something for the people who do America's work, he passed.

At stake was a simple question of law. The NLRB’s complaint (similar to an indictment) against Boeing would never have happened if Boeing hadn’t handed the union a stack of smoking guns: Video and news reports in which executives blamed frequent strikes in Washington state’s Puget Sound region for its 2009 decision to build a new line of airplanes (787s) in South Carolina instead.

The National Labor Relations Act is clear: It prohibits employers from retaliating against workers for protected union activity. Along with punishing people for standing up for themselves, such retaliation discourages co-workers from following suit. But as groups like Human Rights Watch have observed, U.S. companies get away with anti-union retaliation all the time. But whether they’re throwing out union activists or shutting down union factories, they usually don’t come out and say that union activity is the reason why.

Boeing did, so the IAM filed charges last year. In April the NLRB issued a complaint, beginning a process that could have ended in an order for Boeing to undo the retaliation by building 787s back in Washington state. That prompted a full-fledged freakout from the Chamber of Commerce, the GOP presidential field, and congressional Republicans, who threatened to defund the entire NLRB. Rather than defending business retaliation against workers, Republicans pretended that the issue was government retaliation against the people of South Carolina.

The idea that Boeing, as a corporate citizen that has prospered in Washington state, has obligations to the citizens of that state was almost entirely lost. No one articulated the idea that workers have legal rights. Faced with Republicans depicting the NLRB as an out-of-control Soviet-style agency, prominent Democrats mostly hid under their desks. Two month after the NLRB issued its complaint, President Obama appointed a member of Boeing’s board as his new commerce secretary. Asked about the NLRB case at a June press conference, Obama said he shouldn’t comment on the details and then, rather than saying that in general workers need the freedom to go on strike, he said, “As a general proposition, companies need to have the freedom to relocate.”

Meanwhile, Boeing dragged out the administrative law judge hearing that precedes appeal to the full NLRB (and from there to federal court), while congressional Republicans inundated the NLRB’s acting general counsel with demands for documents related to his legal strategy in the case.

But by the time the Machinists reached their contract deal with Boeing instead, it was already clear that the NLRB would not be hearing the Boeing case any time soon. The NLRB, which is supposed to have five members, is currently operating with three, which the Supreme Court has ruled is its minimum quorum. One of the three is a recess appointee whose term expires this New Year’s Eve, giving the company and its political allies every reason to run out the clock.

The NLRB’s politically imposed hibernation could have happened a month earlier if the board’s sole Republican member had followed through on a threat to resign last week to prevent a vote on modest changes to union election rules. Given Obama’s reticence on recess appointments, and Republicans’ declared intention to allow no recesses until next year’s election, Boeing workers would have been waiting a very long time for a shot at justice from the NLRB.

The IAM's contract with Boeing falls short of justice for retaliation against thousands of workers. Under the deal, which members ratified with 74 percent support on Wednesday, Boeing workers get a four-year extension of their union contract, new job security language, and a commitment that a different upcoming line of airplanes, 737s, will be built in Puget Sound, rather than South Carolina or somewhere else. The wages and benefits under their new deal are outstanding by the standards of recession-era U.S. union contracts, but in keeping with contracts Boeing workers have been winning for decades.

While management attorneys and CEOs have been publicly decrying the Boeing case as an example of an out-of-control agency on an anti-business warpath, in private the former must be telling the latter the obvious: You can generally get away with retaliation if you don’t announce that you’re retaliating. If you do get caught, you can delay the process to a snail’s pace. And when labor law becomes a national political issue, Republicans are far more reliable supporters of management’s prerogatives than Democrats are of workers’ rights.

Steven Greenhouse of the New York Times asked whether the new contract represents a new era of labor peace between Boeing and the IAM. But it looks more like a détente.

“If they can’t housebreak us, they gotta find a way to get away from us,” Boeing strike veteran Jason Redrup told me when I visited Puget Sound in July. Boeing has proven that it’s willing to transfer production in order to reduce union leverage, though the new agreement commits it not to do so on its upcoming 737s. Union members, who’ve struck four times since 1989, will remain ready to do so again come 2016.

Given the new production-transferring weapon Boeing now wields, passing the standard of living the machinists have achieved to future generations of Boeing workers will also depend on their ability to organize non-union Boeing employees in states like South Carolina. Many of the Washington state workers I met emphasized their eagerness to organize their counterparts elsewhere. They have a powerful story to tell, of how generations of workers’ strikes wrung economic security out of a corporate giant. It’s a story that can’t be told enough – and that was hardly mentioned in the national controversy over whether Boeing should have to follow the law.