There's more where this came from: Flooding in Thailand hammers the tech giant 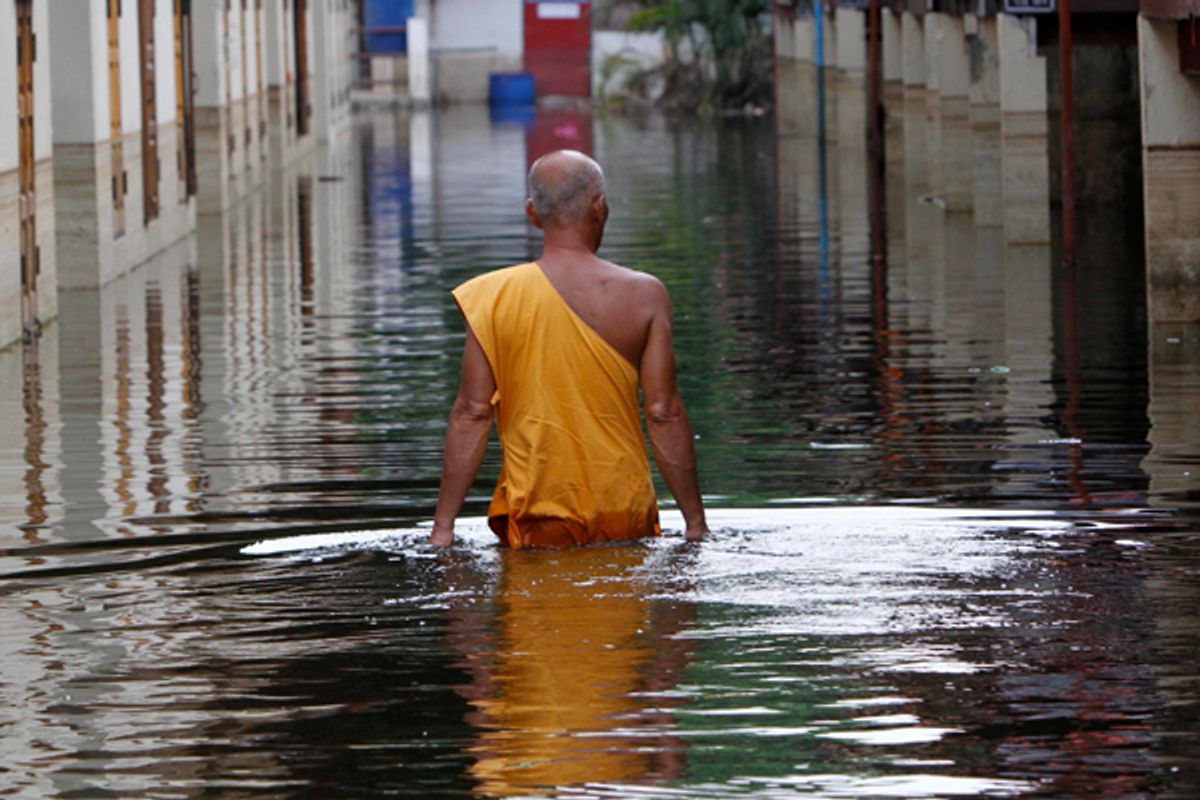 A Buddhist monk wades through a flooded temple in Bangkok. (Reuters/Sukree Sukplang)
--

When Intel, the largest manufacturer of computer chips in the world, releases a warning that it is slashing its expected quarterly revenues by $1 billion, financial markets naturally shudder. Intel is a linchpin of the entire technology sector; if it is hurting, it's a good bet the U.S. economy isn't in great shape either.

But Intel's woes have nothing overtly to do with the U.S. economy. Intel's sales are down because flooding in Thailand has disrupted supplies of computer hard drives. Without hard drives, computer manufacturers can't build computers, so they are cutting back on their purchases of Intel's chips.

There's a story here about the fragility of global supply and production chains. Thailand accounts for one-third of global hard drive manufacturing. By offering extraordinarily friendly tax breaks and other incentives, Thailand managed to lure all of the world's largest hard drive manufacturers to set up shop in Thailand -- and in the process, continued a long-established trend in which U.S. and Japanese manufacturers seeking ever cheaper production costs keep leapfrogging from locale to locale. (Before Thailand became king of the hard drive hill, Singapore ruled the roost. But when Singapore's labor costs became too high, the machinery was simply shipped up north.)

Ever since an earthquake in Taiwan in 1999 disrupted Dell's supply chain, it's been clear that the relentless search for flexibility, cheap labor coasts, and just-in-time manufacturing has a significant downside. Knock one link out of the chain, and the whole mechanism comes to a complete hall. We witnessed this on a huge scale when the Fukushima earthquake/tsunami/nuclear disaster disrupted all kinds of supply chains and slowed global economic growth. Thailand is just the latest case study.

But there's another story here about climate change. Thailand has long been prone to disastrous flooding. And one reason why the financial cost of the floods now ranks among the world's most costly disasters is that the low plains that used to absorb monsoon-delivered water have now been transformed into industrial complexes as a result of Thailand's canny participation in the global economy. So it's not completely correct to regard global warming as directly responsible for this catastrophe.

But the worst flooding in decades happens to be exactly what scientists have predicted will happen in Thailand as a result of rising temperatures. In the future we can expect even greater climate-related disruptions. So what happens when you mix a global economy built on fragile globe-spanning supply and production chains with increasing incidences of extreme weather events? You get chaos.

And then there's a third story here, a story that does turn out to be directly relevant to the U.S. economy. The growth of Thailand's hard drive industry is a reflection of some of the same trends that explain the disappearance of good middle-class jobs in the U.S. As explained eloquently by Edward Luce in today's Financial Times, anything that can be done by a computer or easily shipped offshore -- so-called tradable jobs -- is already gone.

In short, the middle-skilled jobs that once formed the ballast of the world’s wealthiest middle class are disappearing. They are being supplanted by relatively low-skilled (and low-paid) jobs that cannot be replaced either by new technology or by offshoring – such as home nursing and landscape gardening. Jobs are also being created for the highly skilled, notably in science, engineering and management....

The jobs crisis has many worrying manifestations, of which three are worth highlighting. Perhaps the most troublesome is the waning dynamism of the market. People used to describe the US labour market as Schumpeterian, after the Austrian neoclassical economist who depicted the cycle of “creative destruction”. Jobs might be lost rapidly in a downturn but were swiftly reallocated to more productive sectors when economic growth resumed. That is not now the case.

The monsoon season hit Thailand hard this year. In the wreckage left behind we see a global industrial complex that gets severe indigestion whenever Mother Nature acts up, and a U.S. economy that is less and less able to bounce back when disruptions occur.

As a result of our endless quest for flexibility, we have become more rigid.