A homophobic mayor's lesson in love 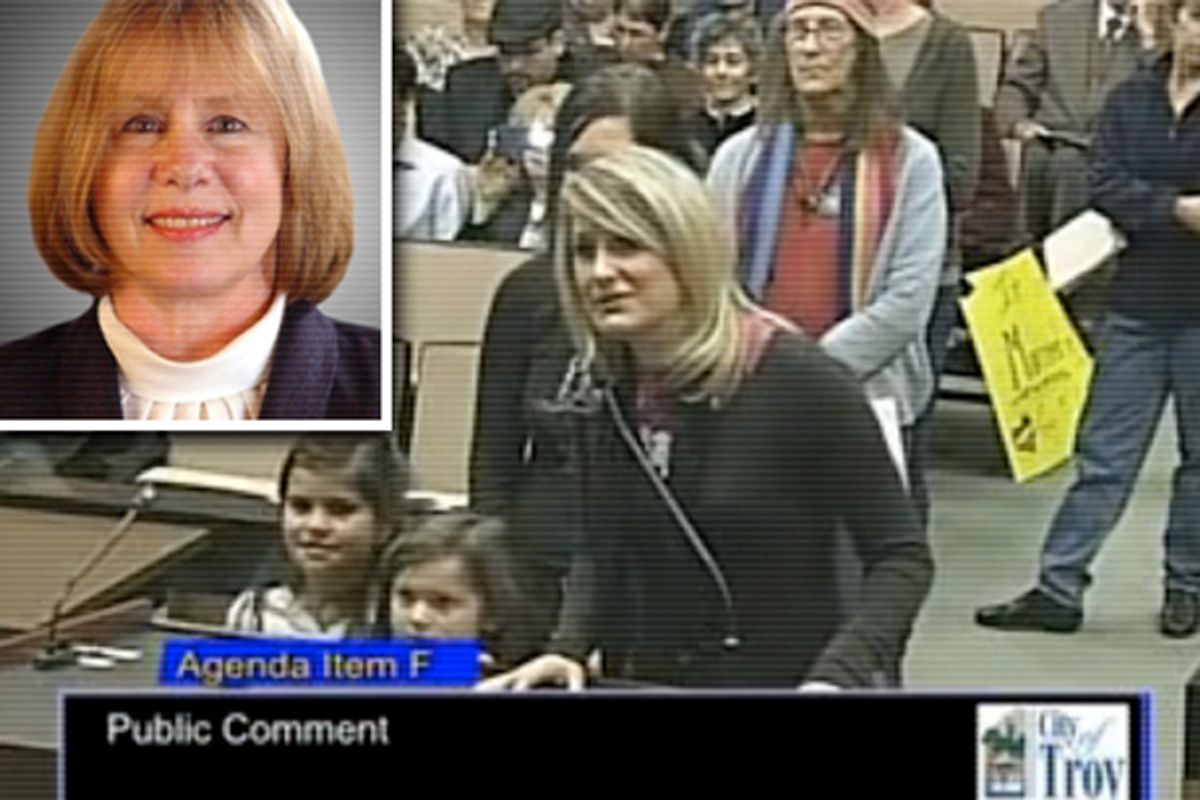 How do you calmly confront prejudice? How do you rationally converse with someone who has contempt for your family? Just like this.

Our story begins in June, when Troy, Mich., realtor Janice Daniels decided she no longer hearts the Empire State. Apparently forgetting that Facebook pages can be viewed by other people, she posted on her wall that "I think I am going to throw away my I Love New York carrying bag now that queers can get married there." I'm sure the tote bag was devastated.

The post might have gone unnoticed as mere Facebook-troll blather had the Tea Partyer not been elected mayor last month. It didn't take long for the Keep Troy Strong blog to point out the incendiary post, and for Daniels to delete it. She then issued a mealy-mouthed apology, stating that though "I do believe marriage should be between one man and one woman, it was inappropriate to use that language." She further explained that "It was meant to be a joke, silly, a funny thing." Of course, the month before, the mayor explained how she wants to use her new job to "promote the healthy aspects of society," including "intact families." "Intact" -- apparently as long as they're not "same sex."

Daniels' comments led to demands for her resignation, admonition from residents who called her remarks "embarrassing" and "hurtful." But it was Michigan resident Amy Weber who really schooled Daniels – and all the other bigots out there – when she stood up last week with her wife, Tina, and two daughters to address the mayor at a city council meeting. "I always like to think of challenges like this as opportunities to grow," she said, introducing her children to the assembly. Weber went on to explain that in her family, "We talk every day about different families and different types of people, and teaching respect and kindness. That is the heart that beats in our home. It's about being kind, about choosing love over everything." She then showed drawings that the girls had done for Daniels with the words "love" on them. Weber even added, "I would love to see you at the next gay pride parade, leading the march, saying … these are my brothers and sisters just like everybody else."

It was a straightforward and profoundly moving moment, one that breaks this thing issue down to its most basic element -- the rights of American citizens to just plain love each other. And because the children weren't prodded to speak, the testimony lacked the reluctant awkwardness of Michele Bachmann's recent run-in with an 8-year-old who mumbled, "My mommy's gay but she doesn't need any fixing."  Instead, it was a sincere and compelling call to basic human decency. Coming on the heels of Rick Perry's absurd (and widely derided) anti-gay spot and Mitt Romney's smackdown from a 63-year-old gay Vietnam veteran who coolly told him, "You have to look a man in the eye to get a good answer. And you know what, Governor? Good luck. You're going to need it" -- maybe it's not such a great week to be a homophobic gasbag.

Given Daniels' "God-fearing love for this country," it's hard to be optimistic that Amy Weber's plea for open-mindedness will fall on receptive ears. But every time gay men and women -- and their friends and families -- come forward and confront small-minded politicians with eloquence and dignity, it makes it harder for the voices of division and intolerance to cavalierly spew their bile and get away with it. Those "queers" and their loved ones so easily dismissed on Facebook are your neighbors. Adjust your mouth accordingly. And "joke" though Daniels' comment may have been, it's nevertheless unfortunate that New York's acceptance of same-sex marriage has made the mayor of Troy decide she can no longer "love" the state. Because as Amy Weber understands, it's not fear, not ignorance and certainly not hate that move us forward. "In the end, love is all that matters," she told Daniels. "No matter what you're doing in life, if you can look at it through the lens of love, you will do the right thing."