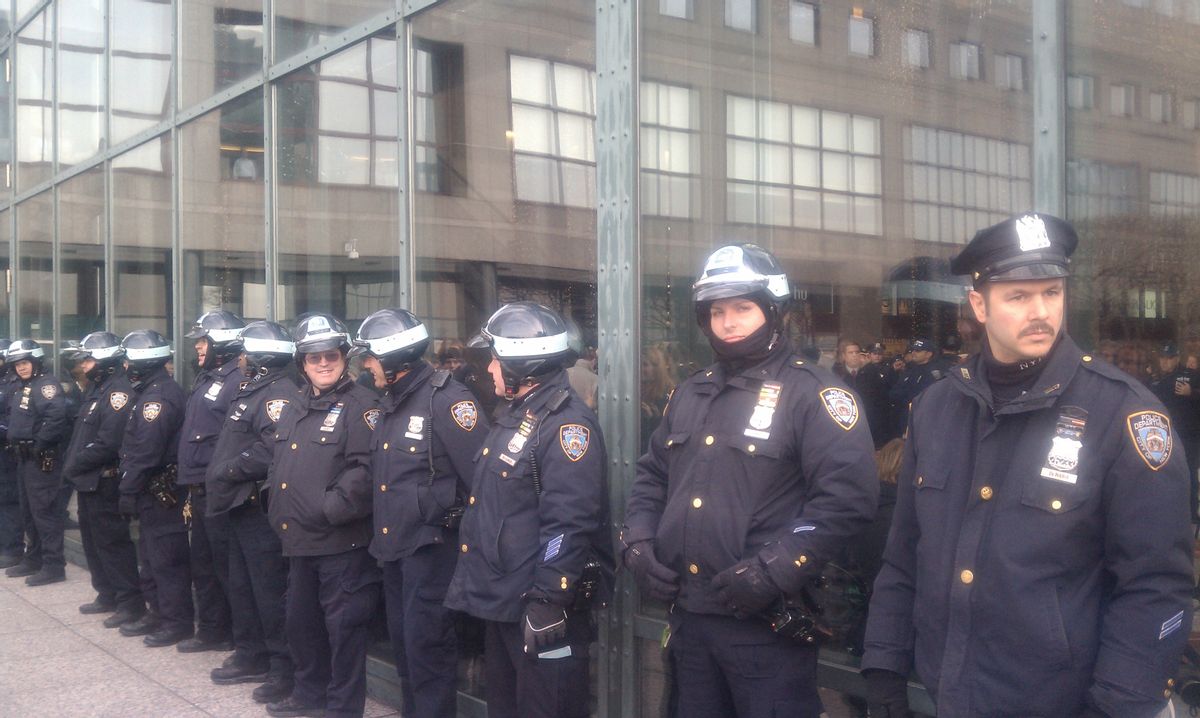 Monday  morning marked yet another Day of Action for the Occupy Wall Street movement. Eight cities on the West Coast attempted to shut down ports. (The hashtag #PortShutdown on Twitter is moving a mile a minute.) In New York City, there was a solidarity march targeting Goldman Sachs that began at 7:30 a.m.  The march was well attended, peaceful and culminated in a street-theater Vampire Squid press conference held in front of the Goldman Sachs building.  Everyone was laughing and having a great time, and my brother John and I were there to tweet and take pictures.  As things calmed down after the fake press conference, word began to spread that protesters should reconvene at the Winter Garden, a nearby public atrium owned by Brookfield Properties (the same company that owns Zuccotti Park).

John and I walked over with a couple of other media people.  He covered the Zuccotti Park eviction for Salon, live-tweets most of the OWS events in the city, and has gotten to know many of the independent journalists who document the movement.  We arrived at the designated area, which felt like an enormous common space in a mall.  The main floor was decorated with Christmas trees, festive lights and public tables and chairs, with a wide marble staircase leading up to a balcony that overlooked the space.

The protesters -- maybe 100 or so -- had gathered in the center of the floor and were dancing and chanting, “Occupy Brookfield!”  A long line of police began to form in the periphery, and John and the other media people dispersed to take pictures.  As the police formed an outer circle to surround the large group, the crowd began to disperse.  Many of the protesters headed up the marble staircase away from the cops, and a small group bolted up a nearby escalator.

That was when everything escalated completely out of control.  The escalator was stopped.  Suddenly, the outer circle of cops was swarming in and violently pushing people away.  John had been standing near the crowd, taking video.  I was about 20 feet from him, and when I looked back in his direction, I saw his blue hood on the ground.  I ran toward him and slid to the ground, leaning in between people's knees to take pictures.  John was face down on the ground being handcuffed, his glasses flung across the floor and people screaming, “Stop, stop, he didn't do anything!”

A cop pulled me up by my shoulders and told me to step back.  I said, “He's my brother.”  Several cops pushed me away as I asked, “What is he being arrested for?  He was taking pictures.”  A cop said, “He didn't produce an official press pass, so that means he was resisting arrest.”  I quite literally didn't understand, so I said, “What?”  At that point, the same cop said, “If you don't step back immediately, you will be arrested too.”

I was pushed behind a line of police.  I stood there, several inches from them, and heard myself saying, “Why are you doing this?”

A protester next to me was yelling at the cops, something about free speech or unnecessary force or any number of logical things to say at a time like this; I was too distracted to pay attention.  But then, an officer said to him, “Get out of my face.  I have a gun, and I don't need people up in my face like this.”

“I just saw my brother thrown to the ground by you guys,” I said.

“But it was the police.  And now you just threatened to take out your gun?”

Another officer approached me and said, “Stop talking to him that way.”

I turned to him.  “I'm talking to him because he told me about his gun.  Why did he say that?”

The second officer just said, emphatically, “I don't know why he said that,” which made me smile for a second.

But that didn't last long, because all around me, the arrests were still happening.  Cops were literally chasing people into corners.  I went up to one and again asked, “Why are you doing this?”

“This is private property,” he responded.

“But this is a public area,” I said back.

“Get out,” he told me.  Another cop passing by told him, “Stop talking to her, you don't have time for this shit,” and pulled him toward a group of cops making arrests.

In a massive push, everyone was forced from the building, shoved out the doors by police in riot gear, who seemed to have appeared out of nowhere.  In moments, the building was barricaded and anyone left inside was trapped.

Outside, the cops formed a line in front of the glass building, and inside, the arrested were lined up in chairs against the windows, their hands behind their backs. My brother was taken to the 7thPrecinct, along with 17 others arrested at the Winter Garden.  According to his tweets from the paddy wagon, eight out of the 10 people in there had cameras or iPhones out or were livestreaming.  To quote his tweet, “Lots of eyes arrested today.”

The role independent journalists have played in documenting and disseminating Occupy is one of the things that makes the movement so powerful and unique.  After the media blackout during the Zuccotti raid, the significance of citizen photographers and citizen tweeters became even more clear.  Today felt like a blatant crackdown on the individuals who were documenting the behavior of the police.  But whether it was a tactical decision or a wild coincidence, the police were unable to silence the cacophony of voices.  The entire morning was still captured in pictures, in video, in livestreams.  Lots of eyes were arrested today, but thankfully, many more eyes saw it happen.