The costs of a port shutdown

Despite noble intentions, Occupy's tactic hurt a wounded economy more than it hurt the 1 percent 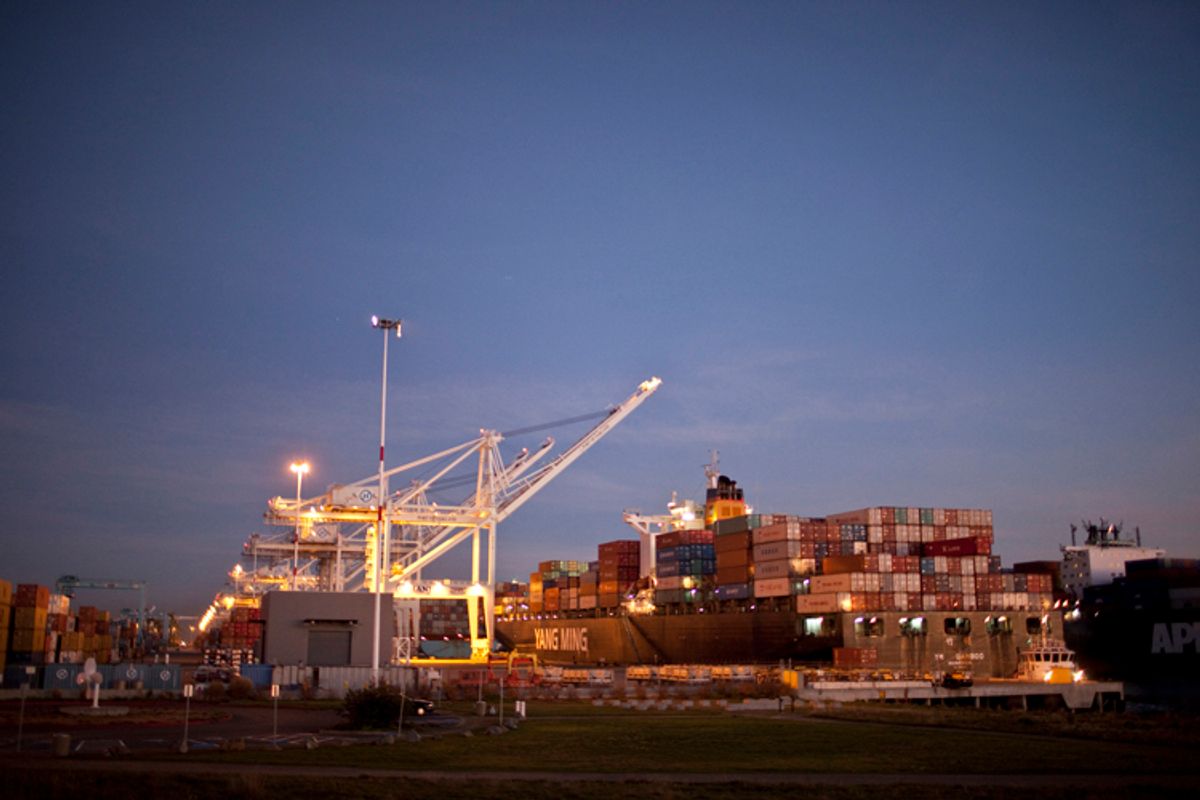 Why did the Occupy movement attempt to shut down West Coast shipping ports on Monday? In their own words, the goal was to strike at the 1 percent. From the San Jose Mercury News:

Barucha Peller, a member of the Occupy Oakland blockade assembly... said. "When we withdraw our labor, we make a (dent) in the 1 percent. Economic boycotts are very effective. The occupation movement is moving into a larger and more coherent strategy of how to disrupt the profits of the 1 percent."

From US News & World Report:

"By shutting down work at the ports this [is] one more day that Goldman Sachs and Wall Street firms are unable to create profit," said Occupy Portland spokeswoman Kari Koch, according to the Portland Tribune.

There is no question that the thinking behind the Occupy movement's evolving strategy has chosen a vulnerable point at which to apply pressure. The West Coast ports that handle trans-Pacific trade are an economic marvel. They boast the world's most technologically advanced infrastructure for moving vast amounts of goods between freighter and truck and rail lines. But their very size and sophistication makes them irreplaceable. Close them down, and everything stops.

We've known this since at least as far back as 2002, when, in the middle of a fierce labor dispute, the Pacific Maritime Association closed all 29 West Coast ports and locked out the International Longshore and Warehouse Union for 11 days. Estimates of the cost of the lockout to the U.S. economy ranged between $6 billion and $20 billion -- and if the lockout had lasted longer, the damage would have spiraled far worse.

Half of all containerized U.S. trade goes through the West Coast ports and there is simply nowhere else for all those containers to go if the ports are shut down. Add into the mix the just-in-time logistics of modern global supply chains -- goods sitting around in warehouses are goods that are just burning money -- and the conclusion becomes obvious: Shut down the ports, and you shut down the economy.

A study published by the Berkeley Roundtable on the International Economy in 2002, Economic Impact of a West Coast Dock Shutdown, painted a stark picture:

In brief, there is simply no way that the enormous volume of waterborne cargo handled at West Coast ports and distribution centers could be rerouted, unloaded and distributed in a time frame and within cost parameters that would radically reduce the risk of international financial crisis or domestic economic shock.... A West Coast port shutdown, will quickly shut down production lines in factories across the United States (and across Northern Mexico) and empty the shelves in the malls.

A study by the consultancy Martin Associates, quoted in the BRIE report, delivered ugly numbers:

The problem, however, with attempting to target the 1 percent with a port shutdown is that the 1 percent are the best situated to ride out any extended shutdown. There's no way to avoid it. Shutting down "Wall Street on the Waterfront" would have some serious collateral damage. The immediate impact of any port stoppage would be felt by the workers who transport the goods from ports to their final destinations, the retail outlets where those goods are sold, the workers at those outlets, and of course, anyone involved directly in the export trade. California, a state that still sports an unemployment rate above 11 percent, would be particularly devastated by a port shutdown that lasted any meaningful amount of time. Goldman Sachs would hardly notice.

Symbolically speaking, the threat to shut down the ports is evidence of a keen understanding of the location of the weakest points in the global economic infrastructure. If we are looking for fresh evidence of how cobbled together and contingent the system through which we exchange goods across the world is, Occupy's waterfront threats are a nice wakeup call. But practically speaking, success shutting down the ports would invite a failure of a much different kind -- a kick in the head to an already crippled economy.