The South is allergic to Romney 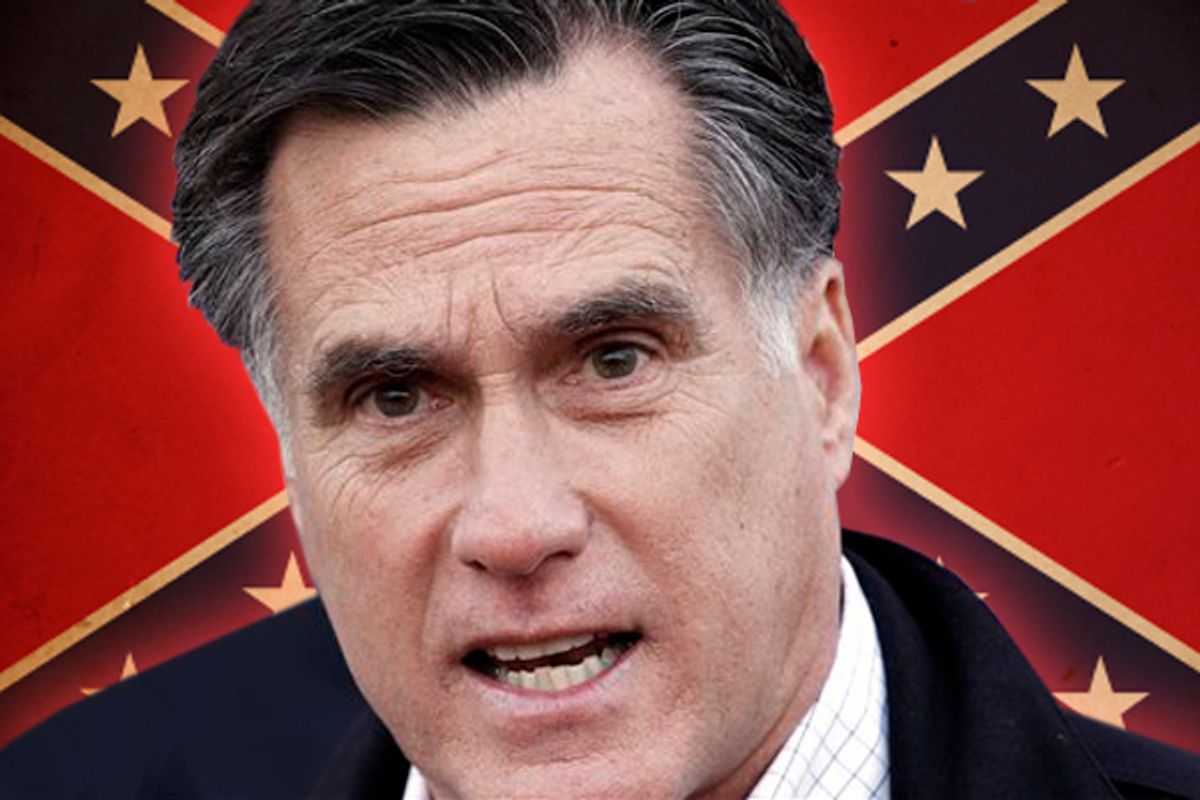 For most of the year, Mitt Romney has had a serious problem that's mostly been obscured by the absurd volatility of the GOP race: He's a very tough sell in the South.

Politico touches on this today in a story that acknowledges the unique obstacles Romney seems to face in the region while ultimately concluding that "the contest for the allegiance of Southern conservatives in the 2012 race is as wide open as ever." That's one way of looking at it, but there's a more disheartening possibility for Romney as well: that with the rise of Newt Gingrich, Mitt-phobic Southerners finally have a consensus alternative with some staying power.

South Carolina, which holds the historically pivotal first-in-the-South primary, has long been a problem for him. In 2008, when he pitched himself as the kind of true believer conservative that Southerners tend to find attractive, Romney finished fourth in the state, with just 15 percent of the vote -- half of what Mike Huckabee, who nearly knocked off John McCain in the state, received. And in polling throughout 2011, South Carolina Republicans have made their yearning for a non-Romney candidate clear. Both Rick Perry and Herman Cain opened up double-digit leads over Romney when they were seen as his main foe earlier in the fall.

Polling has been less intense elsewhere in Dixie, since the other states don't vote as early as South Carolina, but the signs are just as ominous. A Gallup poll released last week showed Romney getting just 15 percent of the vote across the region. That's about where he's been stuck all year; Gallup's survey over the summer had him at 12 percent. This broad resistance in what for the GOP is a voter-rich region is dragging down Romney's overall support, a major reason he's failed to push past 30 percent in national polling.

Now factor in Gingrich's potential impact. He's not a native-born Southerner and doesn't speak with a Southern accent, but the region is responding to his presidential candidacy with more enthusiasm than any other. South Carolina is a perfect example of this. The two most recent polls there show Gingrich mauling Romney by 23 and 19 points. So is North Carolina, where a new PPP poll puts Gingrich 37 points ahead of Romney, 51 to 14 percent. Or take Mississippi. The last poll conducted there was in early November, when Cain was still the hot commodity on the right and Gingrich was still barely cracking double-digits nationally. And yet a PPP survey of Mississippi Republicans still showed Gingrich in first place with 28 percent, followed by Cain and Perry. Romney was all the way back in fourth place with 12 percent.

For Romney, the implications of this are worrisome. If Gingrich manages to "win" Iowa (that is, he's declared the big winner by the press), it will probably be the death knell for Perry, who is trying to make a campaign-saving stand in the state. And without Perry, a Texan with natural Dixie appeal, Gingrich will be well-positioned to capitalize on the potential that clearly exists for him in the South -- starting with South Carolina and potentially carrying over to Super Tuesday on March 6, when five states from the old Confederacy will vote.

In his '08 campaign, Romney fared respectably in the South, finishing near the top in a handful of states. But that might have been deceptive, with Huckabee and John McCain generally gobbling up about two-thirds of the vote, making Romney seem more competitive than he actually was. This time there's a chance Romney will only have one main opponent in the South.

The region's apparent hostility toward him could come from several places. Maybe it's a reflection of his supposed "Mormon problem" that's been so widely discussed. Or it could just be his Northern roots. Or maybe it's ideological. In the Obama-era, the South has been particularly kind to Tea Party Republicanism, which has meant new scrutiny of Romney's moderate-to-liberal Massachusetts past. It's also unclear what's driving Gingrich's Dixie appeal. His ties to Georgia, which he represented in the House for 20 years, surely help. But it may just be that the region is looking for someone, anyone who's (a) viable; and (b) not named Mitt