How to prevent rape without blaming victims 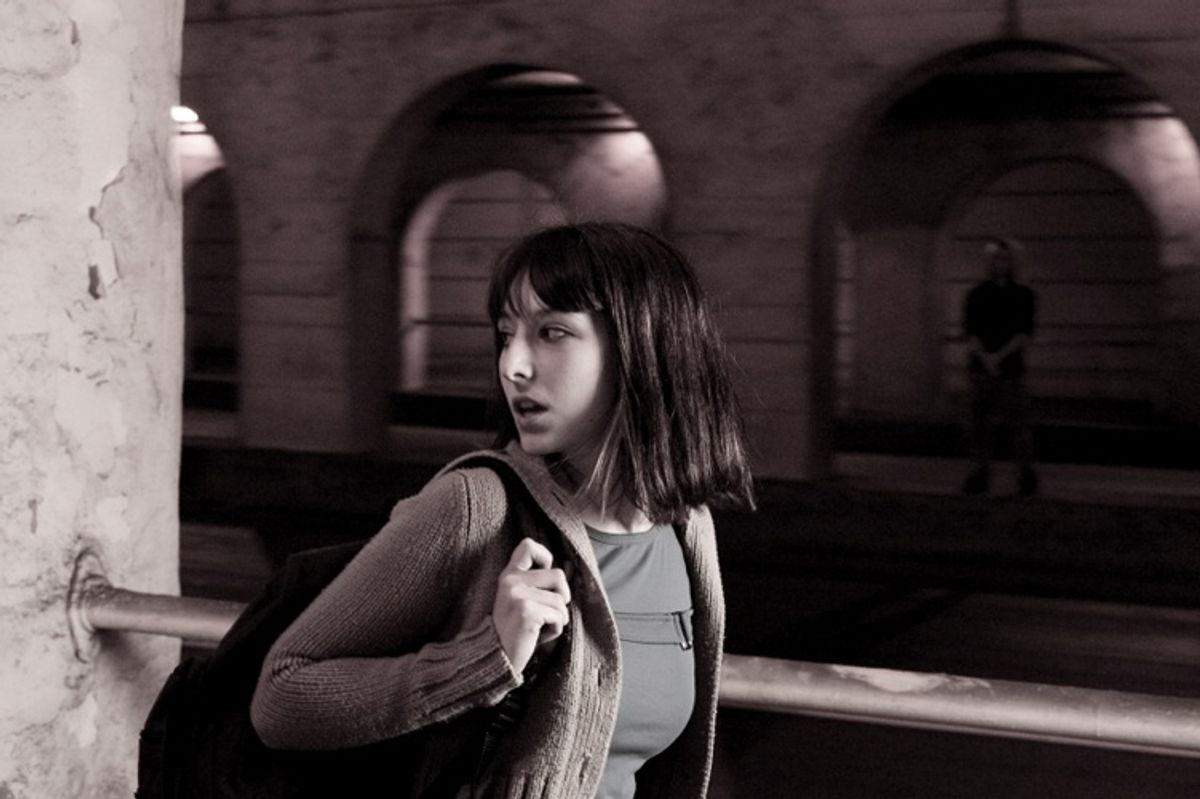 When the news broke, I took straight to Facebook: "Not to be alarmist," I wrote in my status update, "but San Francisco friends, FYI." There followed a link to the police department's notice about a suspect in two rapes that took place within days of each other in my neighborhood. A local blog gruesomely reported that the latest victim was assaulted while walking to work at 6:30 a.m. -- and that afterward, the fire department had to rinse blood off the street. An email from a friend warned, "It's particularly brutal (breaking necks) and he's doing it in public.

A friend who was violently mugged blocks from where the alleged rapes took place responded to my Facebook post: "Like I always say, don't walk alone at night! Cabs are your friend!!!" Later that night, talking about the attacks, my roommate said, "It's crazy, she was on her way to work -- it’s not like she was walking down the street at night in a skirt." In our fear, out of an emotional grasp for control, were we falling back on the stalest of sexual assault myths -- indirectly blaming the victim?

The notion that the way you dress influences your chance of being raped is just one of the ways that we delude ourselves into believing that rape happens to other women – women who aren't as smart or cautious. According to the "just-world hypothesis," we search for mistakes that the victim made so that we can maintain our belief that there is order and predictability in our universe. I've spent enough time in the feminist blogosphere to know that it isn't just the big, bad patriarchy that sustains victim blaming -- it's terrified women, too. This brings up a question that I've long struggled with when reading feminist theory on the subject: How can we dispense useful advice in a way that doesn't blame the victim?

There are plenty of egregious examples of how not to do it: Most recently, the Pennsylvania Liquor Control Board launched an ad campaign against excessive drinking. One of the print ads featured an image of a woman lying on a bathroom floor with her underwear around her ankles. It warned: "When your friends drink, they can end up making bad decisions, like going home with someone they don't know very well. Decisions like that leave them vulnerable to dangers like date rape." On the one hand, it’s a great idea to keep an eye on friends who are so drunk that they’re more vulnerable to crime. On the other hand, as Jezebel's Erin Gloria Ryan wrote of the ad, “Rape is not just a bad thing that happens to someone after drinking too much. It's a deliberate act on the part of the rapist, a violation of another person committed solely because the rapist wanted to rape. The sooner we acknowledge this, the sooner we'll be rid of stupid, finger wagging ads like these."

Amanda Marcotte of the lefty-feminist blog Pandagon argues that the "proliferation of 'tips' on staying safe actually have the opposite affect in a pragmatic way." That's because these tips transform "in the police station and courtroom into a list of reasons to let the rapist off the hook," she says. "I can't really think of a tip that hasn't been wielded by a defense attorney at some point in time to insinuate consent on the part of the victim, which inclines me to just oppose the whole art of scolding potential victims about their responsibility to prevent rape." She also points out that "rapists live in the same culture as everyone else, and so they know all the 'tips' to avoid rape, and so they specifically set out to attack women who are in violation of one of these rules."

In an email to Marcotte, I detailed my conflicted feelings:

Everyone's forwarding it around with tips to stay safe and my immediate inclination is of course to do the same, but then I wonder what the point is, really -- to make sure my friends are actively scared of being raped by a stranger on the street? What good does that do? And isn't it misleading, doesn't it create the false sense of security that they won't be attacked if they avoid doing what this latest victim did (walk to work at 6:30 in the morning)? At the same time, you don't want to throw your hands up and just say: Screw it, there's nothing we can do to prevent this happening to us.

Marcotte says she understands "wanting to assert control, but I also think most women already live in a constant state of low-grade fear. Were women not already doing their best?" Indeed.

Melissa McEwan, who runs the feminist blog Shakesville, writes in an email, "It's my experience that there's really no way to pass on prevention tips aimed at potential victims that isn't problematic, because prevention tips aimed at potential victims necessarily carry the implicit (if unintended) message that 'if you don't do these things, you might get raped (and it will be your fault for not doing these things),'" she says. "And, frequently, there are additional layers of ick, like the recommendation to always take a cab to one's door -- which assumes everyone has the financial ability to take cabs everywhere" and that "cabbies don't sometimes rape people, too." She asks, "Is it actually meaningful advice to warn women against walking home alone, or is it just advice that sounds useful in the void of meaningful rape prevention?" – in other words, prevention that instead targets potential rapists.

"The truth is, there's no such thing as a 'rape prevention tip' for potential victims, because the only way to prevent being raped is to never be in the same space as a determined rapist, over which we often have no control, which is why most survivors have been raped in a familiar place by a person known to them," she says. McEwan has written numerous times on her blog about being assaulted herself:

I was sober; hardly scantily clad ... I was wearing sweatpants and an oversized T-shirt; I was at home; my sexual history was, literally, nonexistent -- I was a virgin; I struggled; I said no. There have been times since when I have been walking home, alone, after a few drinks, wearing something that might have shown a bit of leg or cleavage, and I wasn't raped. The difference was not in what I was doing. The difference was the presence of a rapist.

Jaclyn Friedman, author of "What You Really Really Want: The Smart Girl's Shame-Free Guide to Sex & Safety" and "Yes Means Yes: Visions of Female Sexual Power and a World Without Rape," echoes that point: "Even with a serial rapist on the loose, women in your 'hood are still much, much more likely to be raped by someone they know," she says. "Focusing so hard on stranger danger means we pay less attention to warning signs from people we're acquainted with, and it also contributes to our cultural unwillingness to believe victims when they're attacked by someone they know."

That said, she's "all for practical strategies to keep women safe" -- that's why she taught self-defense for years. The problem is that "most 'safety tips' are beyond unhelpful -- they're dangerous." That's because they often aren't based in fact but rather legend. "The reality is, there's zero evidence linking how 'sexy' a woman is dressed with her likelihood of being raped," she says. "None." Friedman would know: She's been a major proponent of the Slut Walk movement, which was sparked in response to the rape-prevention advice given by a Toronto police officer: "Women should avoid dressing like sluts."

It's also the case that most of us have already deeply internalized basic prevention tips, so you have to wonder about prevention campaigns like the one out of Pennsylvania, which was recently canceled in response to protest. "Are there any women in the U.S. who don't know that drinking makes you more vulnerable to sexual predators? I'm willing to believe that number approaches zero," she says. "Repeating that advice isn't helpful, it's just shaming all of us for not being perfect at following those impossible rules." Friedman suggests an important question in evaluating rape-prevention advice: "Does this advice create more fear, or more power?" This is important because "rapists look for victims who seem vulnerable." She continues: "You know what makes us seem vulnerable? Absorbing so many 'safety tips' that we're afraid for our safety all the time."

After broadcasting the local rape case on Facebook, I logged onto the online sex offender registry -- which I have previously criticized for hindering rehabilitation and reintegration -- and mapped the oogie-boogies in my neighborhood. My boyfriend and I started playing a ghoulish game: We would click on a dot on the map, bringing up a photo of the perp and then guess his crime, "Child abuser, rapist or flasher?" (What can I say, I'm a great date.) In truth, this exercise was meaningless, thanks to its absurd selection bias: They're all sex offenders, so it inherently validates one's ability to spot "bad guys." But the fantasy of total mastery and control is preferable to the reality that sometimes bad things happen to good -- not to mention smart and cautious -- people.

Jill Filipovic, a lawyer and blogger at Feministe, puts it simply: "Human beings always balance risk with reward -- and the truth is, there are lots of reasons to go out with your friends, or take the subway instead of a cab, or go into a bedroom with someone you know," she says. "We assess risk all the time, and women should be given the tools to do that accurately."