The case for making a storm in the ports

A Salon writer claims it doesn't hurt the 1 percent. Here's how he's wrong 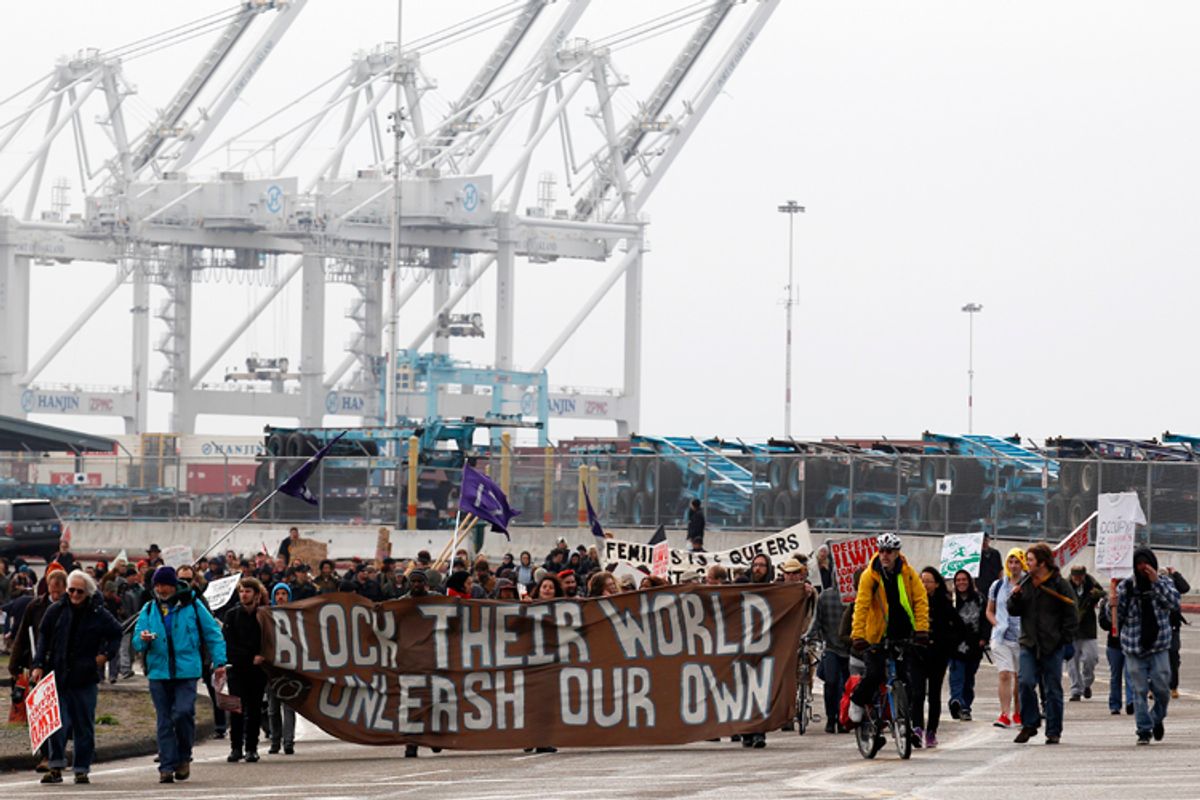 Protestors leave the Port of Oakland after successfully blocking the entrances on December 12. (AP/Beck Diefenbach)
--

The Occupy movement is sailing into murky waters. The coordinated West Coast port shutdown wasn’t just risky because of police violence against occupiers. Shutting down the ports of Longview, Wash., Portland, Ore., and Oakland, Calif., as the protesters did (along with more limited shut-downs in Vancouver, Seattle, Bellingham, Wash., San Diego, Los Angeles, and at a Walmart distribution center in Colorado), has had the result of taking some work hours away from port and shipping laborers who are in a very precarious situation. Actions in Ventura, Calif., Tacoma, Wash., Houston and Anchorage targeted the ports as well, but for this reason did not actually attempt to shut them down.

So we should put Monday’s action into perspective. As Andrew Leonard pointed out, there is almost no way to effectively target the 1 percent without causing serious collateral damage among the many workers who are just barely scraping by. And so Leonard argued that a prolonged port shutdown would devastate California, while leaving Goldman Sachs comparatively untouched. In “The costs of a port shutdown,” he declares that “Despite noble intentions, Occupy's tactic hurt a wounded economy more than it hurt the 1 percent.”

Leonard has a point. It would be callous to deny that Monday’s work stoppage hurt “independent” truck drivers who lost a day of work. This is a serious thing; as Leonard himself reported two months ago, being one of the 82 percent of truck drivers who are classified as “independent contractors” means being responsible for all the costs of driving a truck without any of the protection afforded to employees. So when a driver can’t bring in any income—say, because protesters have blockaded the port—drivers will still be on the hook for costs of the operation, paying overhead without any income.

It is hardly surprising that some independent truck drivers were quite upset about the shutdown; Gavin Aronsen of Mother Jones reported that a trucker on Oakland said he risked losing $200 to $400 in pay, and even kicked over a sign reading "truckers have rights to union wages."

At the same time, this was not a prolonged port shutdown. The longest lasting blockade was in Oakland – in which I took part – where one shift was actively blocked and the two shifts following it were preemptively canceled by the port. And on Tuesday, when ILWU workers asked the occupiers to allow the port to re-open, Occupy Oakland complied. Those ships are being unloaded right now, and truckers are back on the road.

We need a sense of perspective here. On the one hand, anyone who thought a one-day disruption of West Coast ports was going to bring Goldman Sachs to its knees is out of their minds. I don’t know anyone who believed that was going to happen. But actions like this one keep the movement alive, something that has very much been in question.

When police destroyed Occupy Oakland’s camp, for example, they scattered and fragmented its occupants (who cannot reoccupy the space, by the way, because the city leaves sprinklers on to keep the ground a saturated muddy mess, dubbed “Lake Quan”). And as Ben Ehrenreich puts it, with part one of the movement over, Occupy finds itself at a crossroads. Now that all the camps have been destroyed by concerted police crackdowns, does the Occupy movement even exist anymore? Monday’s action demonstrated that it does. When denied the local orientation of its roots, the Occupy movement is capable of playing another hand, even of raising the stakes.

Raising the stakes, of course, raises hard questions. On the other hand, what else is there? As we have learned, peacefully setting up camps -- in one of the least confrontational forms of civil disobedience imaginable --  is something that American cities will simply not allow. So what is left to the Occupy movement but more aggressive and confrontational tactics? Since they are not allowed to camp peacefully in public parks, expect more work stoppages, more foreclosure defenses, and more building occupations.

I think this is a good thing, when put in proper perspective. Andrew Leonard’s argument is a common one: While protest is fine in theory, the cost of this particular protest is too onerous. But in an economy where every shock to the system disproportionately hurts the working class -- first, last and worst -- vulnerable workers will always serve as an effective human shield for the Goldman Sachs of the world, who will always be too big to fail. And if we wait for the magical silver bullet, and we do nothing until we find it, nothing will change. No target will ever be the right and perfect one, no action will ever specifically and exclusively target the 1 percent, and so we will take no action at all.

Inaction is unacceptable. As one of the truck drivers who wrote this eye-opening Open Letter From America’s Port Truck Drivers on Occupy the Port told Andrew Leonard a few months ago, “Every day is getting worse.” And from the beginning, Occupy Wall Street has argued one very simple thing: that our political and economic system is not only broken, but incapable of fixing itself; that the game is not only rigged, but closed to new players; that the status quo is not only bad, but radically unacceptable and getting worse, every day.

This fact changes the political calculus. The ongoing silent violence of the status quo is vastly greater than whatever very mild damage might have been caused by the port shutdown. Compared to the earthquake to working Californians, for example, that Gov. Jerry Brown’s trigger cuts will soon cause – not for one day, but with no end in sight – a day’s loss of wages is a relatively minor matter (if only relatively).

Which brings us back to the root problems that require more radical solutions. The port was the target in Oakland, after all, because it’s a public agency, owned and run by the city of Oakland and required by its charter to be run for the benefit of the city of Oakland at large. But, in practice, it isn’t, and in this sense, it’s a perfect symbol for the public subsidies to private industry that we all pay for, but from which only the 1 percent actually benefit.

While the infrastructure that makes the port’s activities possible – the railroads and freeways and utility grids – were all built by enormous public investment, and while the land was taken by eminent domain (in many cases, from disadvantaged African-American homeowners and businesspeople, in the days when Oakland was strictly segregated), very little of the enormous wealth passing through the port ever finds its way to Oakland’s impoverished schools, for example.

Oakland is not a poor city, as the president of the Oakland Education Association pointed out at an Occupy press conference, or at least it shouldn’t be. Its apparent poverty is a function of the shell game paid with the finances of the port, its major industry, which operates rent-free on public land. While bondholders absorb most of the profits from the original investment, operating profits from the port never seem to find their way back to Oakland’s coffers.

Instead they are being reinvested in making the port as profitable as possible for companies like SSA Marine shipping (in which Goldman Sachs is a primary investor), in real-estate speculation, or in things like making Oakland airport more accessible to the city’s wealthy travelers (while cutting funding for the buses used by lower-income workers).

In short, while Andrew Leonard is at least a little bit right to see a port blockade as something like cutting off the nose to spite the face, I want to offer another metaphor: stopping the port for a day was a poke in the eye to stop the mouth from eating its own hands.

(Read Leonard's "The costs of a port shut down" here. See Leonard's comments below.)

Aaron Bady, graduate student at UC Berkeley, is an occupant of Oakland. His work has appeared in the Guardian, Technology Review, the Chronicle of Higher Education, American Literature, Possible Futures, and his blog zunguzungu.