We're already at war with Iran 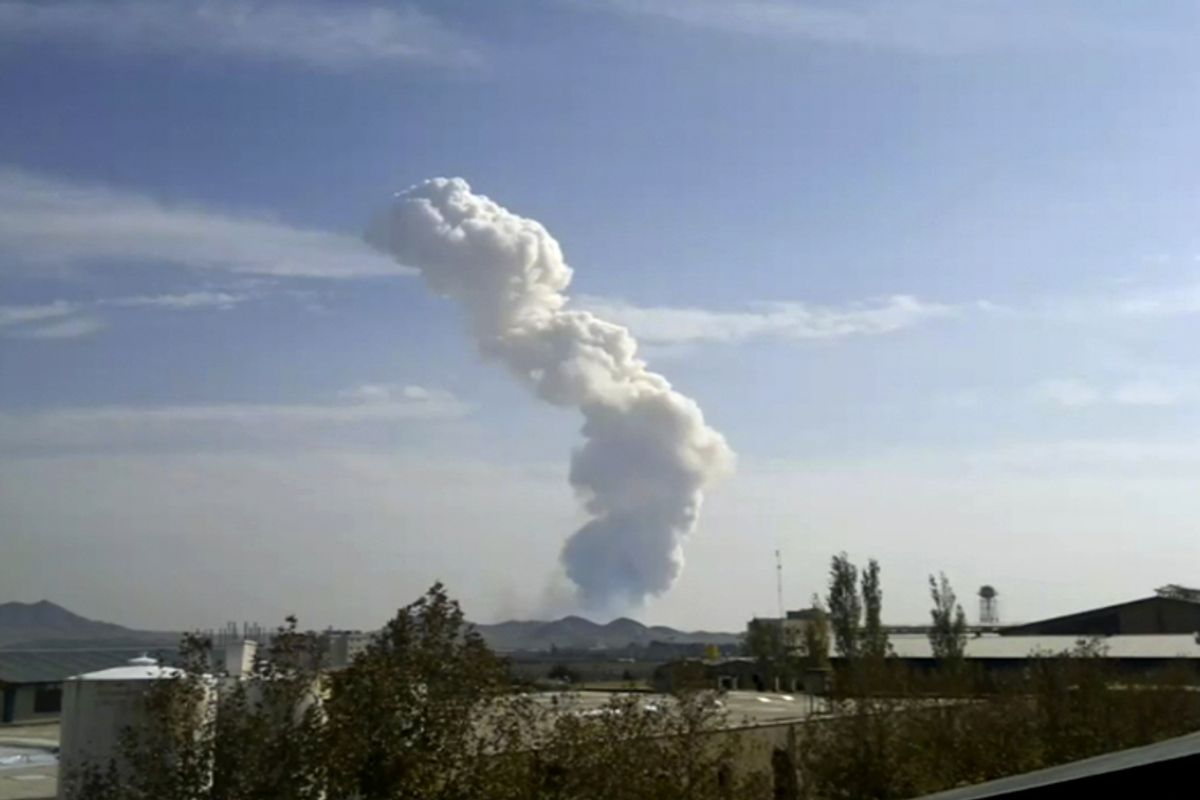 Even as the United States winds down its war with Iraq, former vice-president Dick Cheney is calling for another war in the Middle East. On Tuesday he advised the Obama administration to launch a “quick air strike” against Iran after it captured a U.S. drone flying in its airspace. According to Trita Parsi, president of the National Iranian American Council, “the Obama administration's decision not to risk war by going in and destroying the drone reflects its desire to avoid catastrophic escalation. For Cheney, all-out war appears not to be a risk, but a desired outcome.”

Cheney need not worry—he will likely get his wish in time. The United States is already at war with Iran. A covert, low-level war, yes. But a war nonetheless. That is the disturbing assessment of Parsi, among the country’s most important analysts of Iran, who has been consulting with the Obama administration on its policy. His award-winning 2007 book, "The Treacherous Alliance: The Secret Dealings of Iran, Israel and the United States," featured interviews with policymakers in all three countries to reveal the inner workings of the complicated Middle East. Parsi’s new book, "A Single Roll of the Dice: Obama’s Diplomacy with Iran," includes conversations with over 70 high-level government officials in Iran, the United States, Israel and other countries. Both large and small aspects of the U.S.-Iranian conversation that were hitherto unknown are revealed in the book.

Here are five takeaways culled from Parsi’s new work and a conversation with him on Monday.

We are already at war with Iran.  Assassinated nuclear scientists. Crippling sanctions. Computer worms damaging centrifuges at nuclear facilities. Support for terrorist groups.  CIA spies interrogated. “The United States is now at war with Iran at a covert level,” says Parsi. Other analysts such as Stephen Walt and Michael Hirsh agree.

It was not a shock to Iran that America was spying—hostile nations generally assume they are being spied upon. In bringing the captured U.S. drone to the world’s attention, Iran is simply demonstrating what it knows to the rest of the world: the U.S. is waging low-level war against Iran. “It gives Iran something of a P.R. coup,” explains Parsi. Iran has begun reverse-engineering the drone’s technology, and Chinese and Russian officials have already visited Tehran to learn the technology, says Parsi. “It’s a pretty significant event.”

Diplomacy didn’t fail, it was never tried. “Contrary to the prevailing narrative, the limited diplomatic encounters between Iran and the U.S. in 2009 and 2010 cannot be characterized as an exhaustion of diplomacy,” Paris writes in his book. U.S. officials sat at a table with their counterparts from Iran, in Geneva, nine months after Obama assumed office. Three days of talks—much of which was spent working on the wording of the communique announcing the results of talks—comprised the bulk of the administration’s direct engagement with Iran. Domestic pressures in both America and Iran prevented a more thorough attempt at peacemaking. Following thirty years of mistrust between Iran and the United States, three days was not even close to enough time to give diplomacy a real chance, Parsi says.

Iran wanted an agreement—and still does. Among the revelations excavated by Parsi’s interviews with senior Iranian officials is that the regime was genuinely interested in making a deal with the United States. President Mahmoud Ahmadinejad’s bizarre congratulatory letter two days after Obama’s election victory was an unprecedented move meant to signal Tehran’s willingness to take risks in the interests of rapprochements.

“Despite the skepticism and cynicism, Obama’s posture and interest in engagement did help prompt an unprecedented in debate about relations with the U.S.—an age-old, strictly enforced taboo in the Islamic Republic,” Parsi writes. Iranian policymakers were divided. Reformists were excited about the prospect of long-term changes in U.S. foreign policy that could transform the relationship. Conservatives were more cynical, believing first that Obama would not win in the 2008 presidential election and then that he wouldn’t be calling the shots. Still, the Ayatollah Khamenei and Ahmadinejad were both on record supporting dialogue with Obama.

A full-scale war is inevitable if things don’t change. “We are on the trajectory to full-scale war,” Parsi bluntly says. He believes that neither Iran nor the United States wants that outcome, but that the confrontational back-and-forth the countries are engaged in will lead them to war inexorably. “Though there is no will in Washington or even in Tehran for war, they can lose sight of this when they go from controlling the dynamic to being controlled by it,” he says. For instance, Iran takes a stance it sees as defensive but its opponent sees as aggressive, and the United States feels requires to respond.  International relations theorists call this dynamic “spiraling,” and it is a common cause of war. “There is no stability in covert war—this cannot last,” Parsi says. Sooner or later, one side will take a fatal step.

There’s still time to prevent war. Even now, as the hopes during the 2008 campaign that Obama could make peace with Iran have dimmed, Parsi believes diplomacy would work in reuniting the longtime adversaries. “An institutionalized enmity that has taken three decades to build will not be undone through a few meetings over the course of a few weeks,” he writes. But sustained, long-term diplomacy can accomplish tremendous things. “I would advise the administration to get on with real engagement, because I definitely believe it can still work,” Parsi says.

If it doesn't, the United States may find itself fighting a third shooting war in the Middle East in a decade.