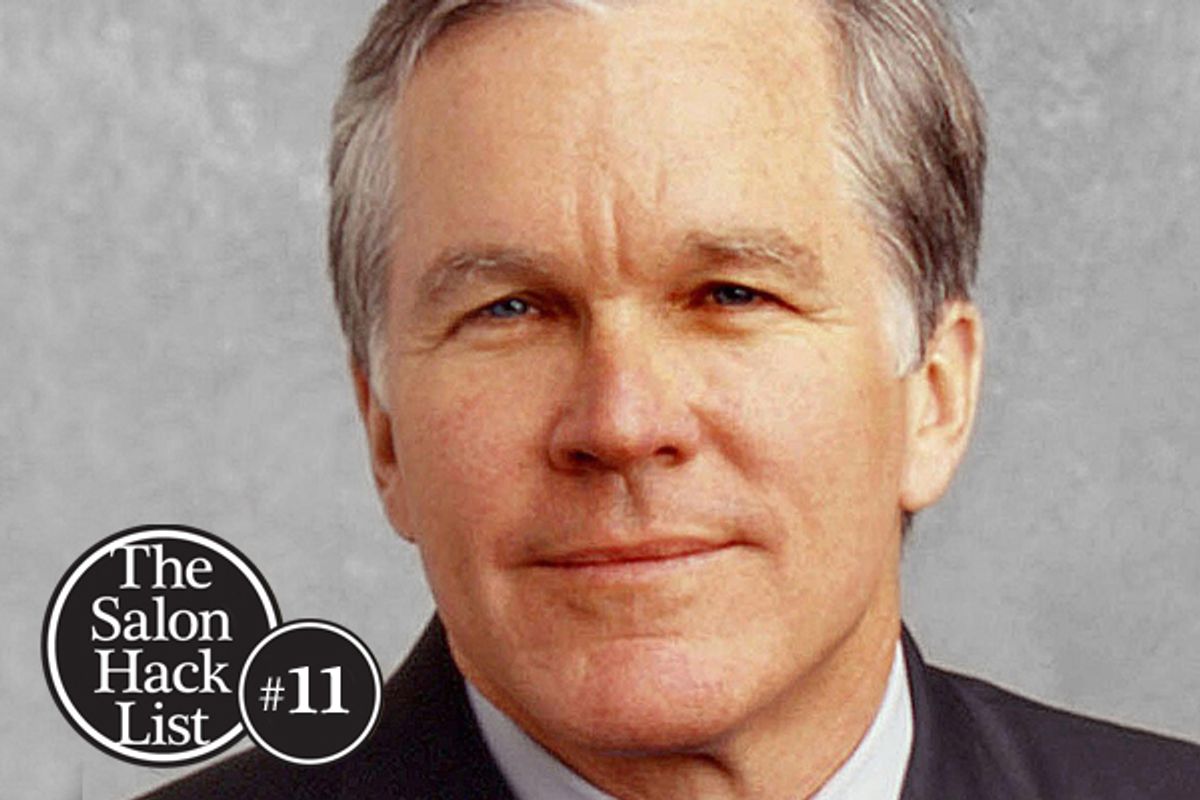 I guess we should all be grateful for the lesson that you don't need to be all that insightful or wise to become a successful newspaper editor. Bill Keller, once a fine and decorated foreign correspondent, took over the editorship of the New York Times in 2003, when his predecessor, Howell Raines, was forced to resign in the wake of the Jayson Blair scandal. Keller did, honestly, a decent job righting the ship. It took him a while to deal with the paper's in-hindsight much greater violation of the public trust -- the faulty Iraq reporting of Judith Miller and her bizarre behavior during the Plame fiasco -- but he cut ties with the prevaricating Miller and took responsibility in public and in the paper for errors and mistakes that had really happened under his predecessor. The Times, for its many faults, remains the best newspaper in the nation. (It has retained that title thanks in large part to the tireless work of competing newspaper owners Sam Zell, Rupert Murdoch, the Washington Post Co., but it's still an achievement.)

So it probably would've been best for Keller to have retired to, say, write an unread memoir and join the Council on Foreign Relations instead of deciding to return to the place where his obvious, obnoxious hackishness is most apparent: The opinion page.

Oh, but while holding what could be the most powerful job in international media, what Keller really wanted to do was go back to writing! This is why, while editing the paper, he'd occasionally parachute into war zones (or early primary states) to file utterly useless news analysis pieces, which, of course, ended up on the front page of the paper, no matter the unoriginality of the observations or the tiredness of the topics.

And, fine, as I said, he was once a fine foreign reporter. What he was never, though, was a good opinion columnist. He's got a bland style coupled with a smug voice, and absolutely no original thoughts on the major issues of the day. When Times Magazine editor Hugo Lindgren hired Keller to pen a front-of-the-book column, it was perhaps supposed to be full of banal lessons from his old days in the field, but it very quickly became "obtuse old man yells at cloud computing."

His early, silly column on how Twitter is making us stupid was a rather blatant example of trolling, which isn't the sort of thing the editor of the Times should be doing. Then, of course, there was the column he spent relentlessly trashing the Huffington Post for being -- ugh -- "aggregators," comparing bloggers to Somalian pirates. This was an argument straight out of breathless media columns from about five to 10 years earlier, but Keller had been too busy doing his newspaper editing job at the time to share his opinion, and I guess he felt left out. He needn't have -- it turns out his opinion was shared by every single other hidebound old-school newspaper dude in the nation.

His reporters began trying to express to him how embarrassing he was being and how difficult he was making their jobs ("Times media editor Bruce Headlam and media columnist David Carr had an intervention with Keller to explain how his columns were hurting their ability to cover the industry," New York says), which Keller, in classic hack style, took to mean that his columns had sparked "conversation," making his efforts worthwhile and provocative instead of just stupid.

Keller left the Times Magazine, of course, for the Times opinion page. He has recently argued that economic recovery has been impeded by the "proliferation of blogs and social media" and written this rambling, pointless entry, which seemed like he wrote it in a half-hour while paging through the international news-briefs in the Economist. (It is, I think, supposed to be ironic? He does the stupid Maureen Dowd "edgy pop culture reference" thing and everything.)

And let us never forget Keller's dozens of pre-editorship columns in support of the invasion of Iraq, written with the sureness of all the other morons who wrote very serious columns about how important it was that we invade Iraq to punish them for not having WMD that they weren't going to ever be able to potentially use against us. Here are some fun lines from Bill Keller columns from before he took over as editor:

February 8, 2003: "Thanks to all these grudging allies, Mr. Bush will be able to claim, with justification, that the coming war is a far cry from the rash, unilateral adventure some of his advisers would have settled for."
Ibid.: "Let's imagine that the regime of Saddam Hussein begins to crumble under the first torrent of cruise missiles. The tank columns rumbling in from Kuwait are not beset by chemical warheads. There is no civilian carnage to rouse the Arab world against us. In fact, Al Jazeera shows American soldiers being welcomed by Iraqis as liberators. The illicit toxins are unearthed and destroyed. Persecuted Kurds and Shiites suppress the urge for clan vengeance."
December 14, 2002: "How will Iraqis react to an invasion? (Many of them with an outpouring of relief, wouldn't you think?)"

Hm, I wouldn't think, but you did, apparently!

HACKIEST 2011 MOMENT:
His pseudo-mea culpa for being perhaps the single most prominent member of the "Liberal Hawks in Favor of Invading Iraq in Order to Make Us Feel Better About 9/11" club, which he picked a slightly different name for when he opened its first chapter in his old Times Op-Ed column. Like other former war cheerleaders, he essentially claims to have been swallowed up by a sort of temporary mass hysteria. Keller's sorta-apology basically proves that every antiwar thinker who said the liberal hawks were just drunk on the pathological need to lash out irrationally in order to prove that America had the biggest balls in the world was correct. "By the time of Alice’s birth I had already turned my attention to Iraq, a place that had, in the literal sense, almost nothing to do with 9/11, but which would be its most contentious consequence," he now writes. Oh, "almost," you still say?
- - - - - - - - - -
(Read the introduction here. Read the 2010 Salon Hack 30 List here.)