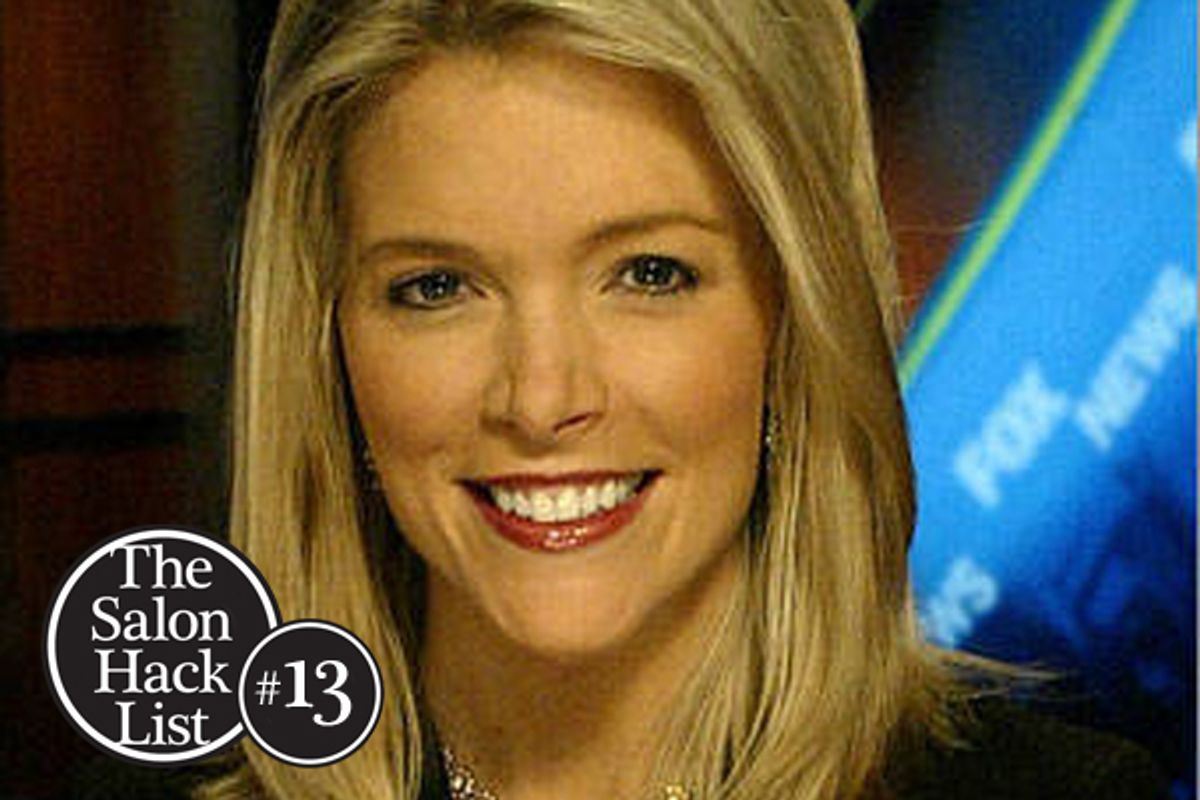 Megyn Kelly is one of Fox News chief Roger Ailes' favorites, and it's easy to see why: She's equal parts gorgeous and belligerent. She's smart and quick enough to hold her own in any interview, and she has no qualms about beating the drum for whatever crackpot right-wing story line the network's lead propagandists are currently pushing, no matter how dubious. Hence, we get a year's worth of terrifying stories on the awesome political power of the New Black Panther Party, complete with unlikely Justice Department conspiracy theories and b-roll footage designed to unnerve old white viewers. When the story has outlived its usefulness, it's summarily forgotten, and we move on to the next tale.

There's really no one who better represents the insidious nature of the Fox project than Kelly. Hannity and O'Reilly are packaged and sold as right-wing shouters. Kelly's an "anchor" who professes to have no partisan bias of her own. And she could very well be telling the truth! She doesn't need to personally believe the things she says, after all. When she casually refers to the tax burden on "the so-called rich" (so called because they are, generally), she's just doing her job. When Kelly, in the midst of excoriating a Democrat, claims that Fox personalities don't regularly compare liberals and Democrats to Nazis, everyone (besides some unknown non-savvy portion of her audience) knows we're not supposed to take her seriously.

I imagine that perma-sneer, that disgusted look of disbelieving contempt that remains plastered on Kelly's face during the entirety of "America Live," disappears the minute the red light on top of the camera goes off, because Megyn Kelly doesn't actually give a shit about the National Day of Prayer or seriously believe the New Black Panther Party represents a threat to democracy. She's just happy to have a job doing something she loves: being a reliable bile-delivery system for a massive political messaging organization.

Recently, in an argument with some repulsive talk radio hack, Kelly defended not just her own paid maternity leave -- the sort of professional perk that a high-powered attorney like herself would (justifiably!) feel totally entitled to -- but went on to seemingly endorse European-style government-mandated paid leave for all, including fathers. The fact that a pre-leave Kelly had savagely mocked the idea of paternity leave is amusing but unsurprising. She's a former attorney. Her primarily professional skill is convincingly making whatever argument you pay her to make. (She said as much to Rebecca Dana, in fact.) Which is so much worse and hackier than being a simple ideologue.

HACKIEST 2011 MOMENT:
Her offhand claim that police pepper spray is "a food product, essentially," which seems like a very rough first draft of a right-wing talking point that was not quite ready for standard use by the noise machine.
- - - - - - - - - -
(Read the introduction here. Read the 2010 Salon Hack 30 List here.)